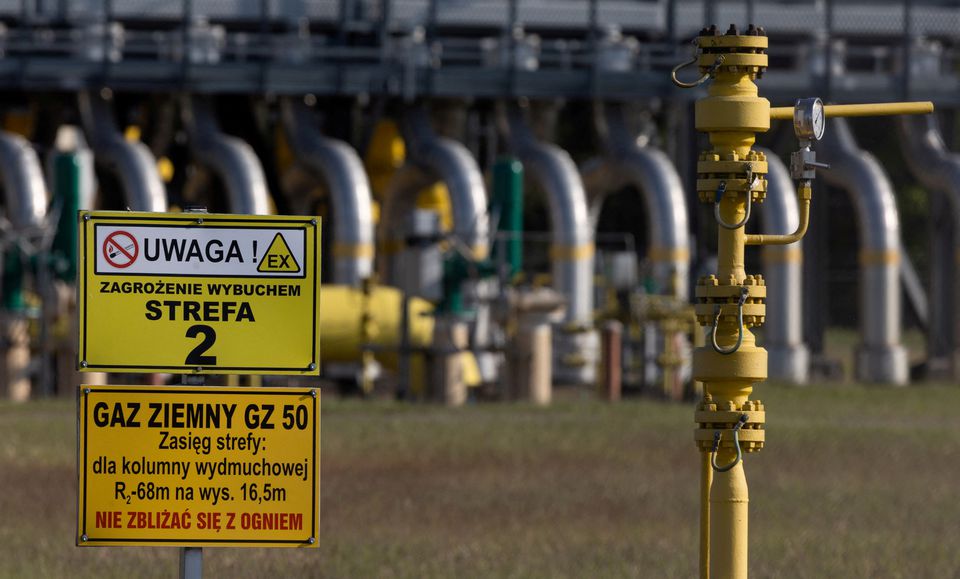 Warning signs are pictured in front of the gas compressor station, a part of Polish section of the Yamal pipeline that links Russia with western Europe which is owned by a joint venture of Gazprom and PGNiG but it is operated by Poland's state-owned gas transmission company Gaz-System, in Gabinek near Wloclawek, Poland May 23, 2022. REUTERS/Kacper Pempel/File Photo

The European Union executive on Tuesday proposed a gas price cap for the bloc at 275 euros ($282) per megawatt hour for month-ahead derivatives on the Dutch exchange that serve as Europe's benchmark.

The idea to cap prices has divided EU countries for many months and diplomats said the level proposed on Tuesday was unlikely to be popular when energy ministers from the bloc's 27 member countries debate it on Thursday.

"We propose to put a ceiling on the TTF (Title Transfer Facility) gas price to protect our people and businesses from extreme price hikes," EU energy commissioner Kadri Simson said.

If approved by EU countries, the cap would be available for one year from Jan. 1.

It would only take effect if the contract surpasses that level and, at the same time, the difference between the cap and the global liquefied natural gas (LNG) price exceeds 55 euros for 10 consecutive trading days, Simson added.

Over the months of debate about how to tackle a surge in gas prices, those opposed to the idea of a price cap have said it could lead to increased consumption, make procurement difficult and trigger legal risks related to existing contracts.

Simson said the mechanism was "carefully designed to be effective, while not jeopardising our security of supply, the functioning of EU energy markets and financial stability".

She also said it was not a regulatory intervention to set the gas market at an artificially low level.

Rather, it was "a mechanism of last resort to prevent, and if necessary, address episodes of excessive gas prices which are not in line with global price trends".

Diplomats, speaking on condition of anonymity, said the proposed ceiling was likely to disappoint the majority of EU states that have demanded a cap for months, and fail to assuage concerns of a small but powerful camp of member countries, led by Germany, opposed to the intervention.

One diplomat from the group in favour of a cap said they had expected a lower limit of around 150-180 euros per megawatt hour (MWh) and for the cap to be activated several times in a year.

"Otherwise, we'll have a cap on paper that will in practice never kick in," said the diplomat involved in EU negotiations.