29 Jun 2022  by powermag.com
Landsvirkjun, the national power company of Iceland, on June 28 announced it intends to capture and reinject carbon dioxide (CO2) from Þeistareykir (Theistareykir) Geothermal Station, and at the same time reduce CO2 emissions from Krafla Power Station through enhanced well management efforts at that site. Construction of the project, called Koldís, is expected to begin next year, and the project should be fully operational by 2025.

Landsvirkjun wants its operations to be carbon neutral in 2025, and already has progressed toward that goal, reducing the group’s carbon footprint by 61% since 2008. A major part of its strategy is to significantly reduce emissions from geothermal power generation, as the vast majority of the company’s greenhouse gas emissions are generated by geothermal energy. Landsvirkjun expects the Koldís project will capture almost all CO2 and hydrogen sulfide from the two-unit, 90-MW Theistareykir power station (Figure 1), and return it to the ground for storage, from 2025 onward.

1. This is a rendering of the Theistareykir geothermal power station in Iceland, site of a new carbon capture project. Courtesy: Landsvirkjun

“Koldís is an important project that we at Landsvirkjun will take on in the coming years,” said CEO Hörður Arnarson. “It is yet another example of our great ambitions in climate change, where we have set ourselves clear goals for carbon neutrality by 2025.”

Rikardur Rikardsson, the power company’s executive vice president of business development and innovation, told POWER at a mid-June meeting in Iceland that Landsvirkjun is developing several other projects, including the production of hydrogen for use in large vehicles, and the production of methanol for cargo ships. Rikardsson noted that hydrogen and CO2 can be used to produce green methanol with renewable electricity, of which Iceland has plenty—nearly all the country’s power generation comes from geothermal or hydropower.

The Koldís project involves the design and installation of equipment for capturing and reinjecting carbon dioxide from the Theistareykir power plant, which was the first geothermal power station that Landsvirkjun built from scratch. The station’s first 45-MW unit was commissioned in November 2017, with a second unit added in April 2018.

Both carbon dioxide (CO2) and hydrogen sulfide will be captured from the plant, then dissolved in water and pumped back into their natural environment. Landsvirkjun in a news release said “this closes the cycle of these gases during geothermal production, instead of interrupting them and releasing these gases into the atmosphere. The main components of such a system are a gas capture tower, pipes from the gas capture to the injection site, an injection well and a monitoring well.”

There are also plans to map and to estimate the cost of more ways to reduce CO2 emissions from the two-unit, 30-MW Krafla plant by controlling geothermal production through enhanced well management, though Landsvirkjun notes that CO2 emissions vary between boreholes. The company said its strategy will be part of an action plan to minimize CO2 emissions, and in doing so reduce the impact of the power station’s electricity output.

Landsvirkjun has consulting agreements with Mannvit, an Icelandic engineering and consulting firm, and Carbfix, a Reykjavik-based company that has developed a solution for storing CO2 that involves the injection of CO2 into the ground, where it is turned into stone. The consulting efforts for the design of the Koldís project are expected to be completed this year.

The national power company said its solutions “are based on a methodology that was developed in collaboration between Landsvirkjun, HS Orka and Orkuveita Reykjavíkur (Reykjavik Energy) on a reduction in geothermal gas emissions about a decade ago.” The project is expected to use Carbfix’s carbon capture and storage methods. 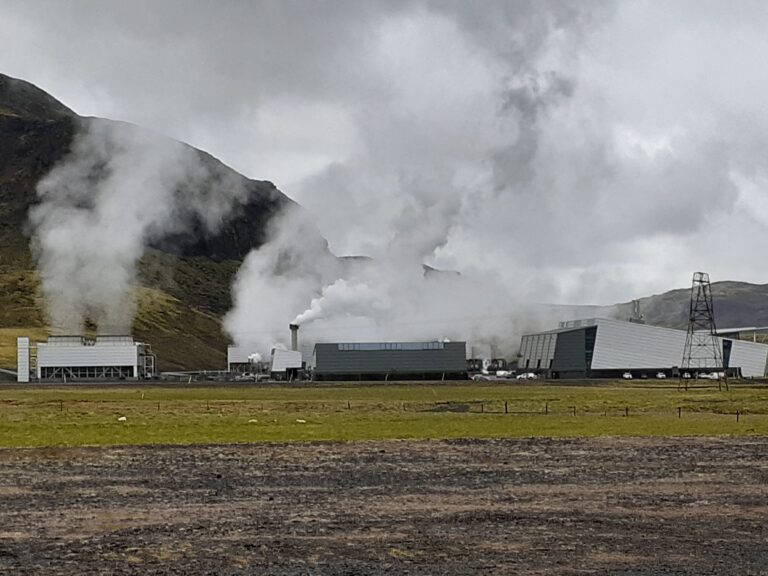 2. The Hellisheidi Geothermal Power Plant has 303 MW of generation capacity and is the largest geothermal station in Iceland. Source: Darrell Proctor / POWER

Carbfix, a subsidiary of Reykjavik Energy, has been working in Iceland with Switzerland-based Climeworks on direct air capture (DAC) technology. The companies have worked together on a DAC project at the 303-MW Hellisheiði (Hellisheidi) geothermal plant (Figure 2) in Iceland, which POWER visited in mid-June.

Climeworks on Tuesday announced it has broken ground for a larger DAC project, called Mammoth, at the Hellisheiði site, again as part of a collaboration with Carbfix.