Hydrogen Is Also a Greenhouse Gas, so Leaks Must Be Minimised

Recent reports have suggested that large-scale production of hydrogen could do more harm than good in the effort to reduce global warming.

The climate benefit from a well-regulated clean hydrogen economy outweighs the impact of any emissions that hydrogen would add to our energy system, especially if we prioritise hydrogen produced from renewables-powered electricity.

Hydrogen is a powerful tool for decarbonising parts of the economy where electrification isn’t viable. It has the potential to reduce emissions by 11–13 kilograms of carbon dioxide equivalent (CO2e) per kilogram used compared to fossil alternatives. In processes like steelmaking, it can deliver even greater emissions reductions (abating 25–30 kg CO2e per kg H2 used). By deploying hydrogen at scale, the United States could abate roughly 15 percent of its yearly carbon dioxide emissions.

The realisation of this potential depends on producing, storing, transporting, and consuming hydrogen in a way that minimises emissions at each step. Every choice made in the hydrogen supply chain will be crucial in determining the ultimate emissions benefit achieved.

In clean hydrogen production, this means ensuring regulators and producers actively address the carbon intensity of the power supply, upstream methane leakage, and carbon capture rates. In theory, both “blue” and “green” hydrogen — the most commonly considered production pathways — can achieve close to zero emissions.

For green hydrogen (produced by splitting water molecules), it requires the use of renewable electricity to power the electrolysers. For blue hydrogen (produced from natural gas), near-zero production pathways require carbon capture technologies that can achieve unprecedented capture performance, as well as the near elimination of upstream methane leakage from the supply of natural gas.

Hydrogen leakage is an additional emissions risk common to both production routes, although it is typically not tracked in emissions accounting today. While proper regulation will be crucial, supply chain leakage constitutes the least severe risk, and tools and technology exist to mitigate it. 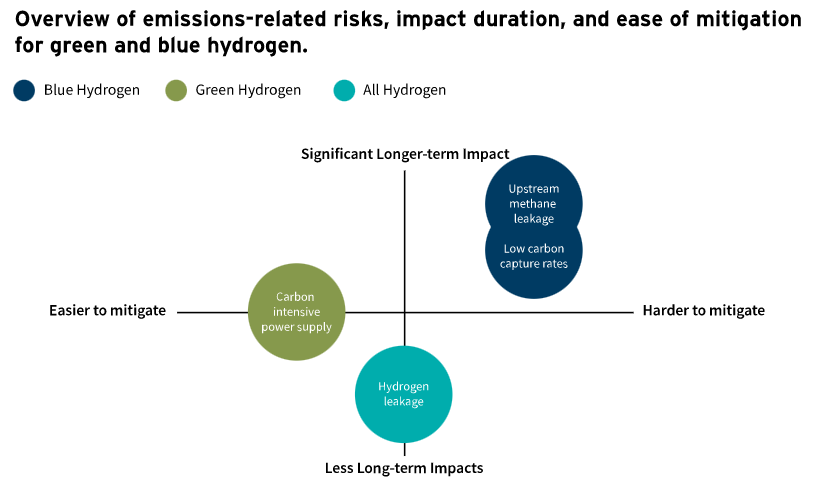 Why Is leaked Hydrogen a concern?

Some emerging studies present scenarios of leaked hydrogen contributing significantly to climate warming. Hydrogen leaked to the atmosphere at any point in the supply chain can act as an indirect greenhouse gas, reacting with pollutants like methane to extend their lifetime in the atmosphere. Leaked hydrogen can also impact ozone concentrations, potentially harming air quality and the recovery of the ozone layer, and it can create water vapor in the atmosphere, enhancing the greenhouse gas effect.

Recent research has indicated that leaked hydrogen may contribute more to global warming than previously estimated. However, even at high rates of leakage, green hydrogen has an undeniably positive climate benefit in the short- and long-term, especially compared to the demonstrably large climate harm from the fossil fuels it replaces.

Hydrogen is not the only energy supply chain with issues related to leakage. In fact, the most relevant displacement ultimately targeted by hydrogen deployment is natural gas, which makes it a relevant benchmark to compare hydrogen with.

There are four major parts of a gas supply chain where leakage could occur: upstream production, and downstream transmission, storage, and distribution. On a kilogram-to-kilogram basis, methane, the main component of natural gas, will contribute up to three times more warming than hydrogen over a 100-year time frame. Over a 20-year time frame, methane’s warming effect is twice that of hydrogen.

But hydrogen is more energy-dense than natural gas, so much less fuel is needed to provide energy for the same function. Hydrogen provides 2.5 times more energy than methane per kilogram (120 MJ/kg and 50 MJ/kg, respectively), so methane’s warming impact is up to seven times worse than that of hydrogen when considering the warming potential in terms of the energy contained in each molecule.

Comparing the supply chain leakage of a minimally regulated hydrogen system to an average natural gas system indicates that hydrogen will still result in lower emissions (Exhibit 2). If we consider methane leakage rates that have been observed in real-time measurements (rather than assumed in standardised emissions factors), the difference is exacerbated. Leading green hydrogen producers have demonstrated that leakage during production can be minimised easily at scale with today’s technologies and operational best practices.

Additionally, significant leakage is less likely for hydrogen than for natural gas, given the relatively high value of hydrogen, newer infrastructure, and the carry-over of lessons learned in detection and monitoring technology, all of which will drive down leakage across hydrogen’s supply chain. 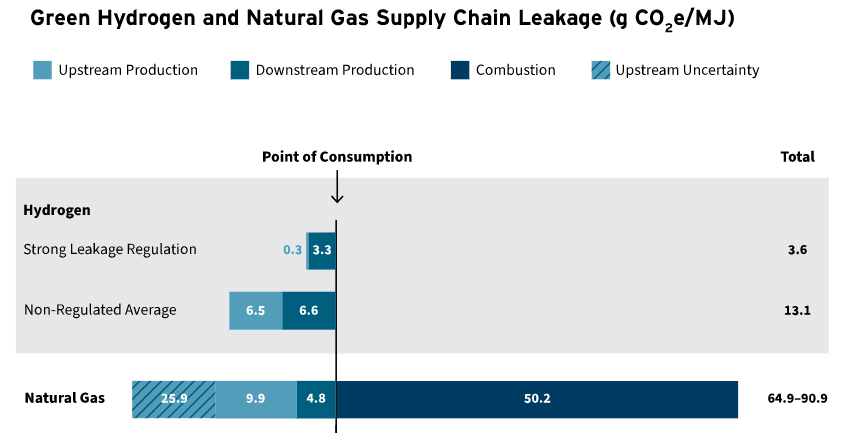 Exhibit 2: Hydrogen’s emissions impacts along the supply chain are less than those of natural gas, given the large and highly variable upstream methane emissions of natural gas. Crucially, as a carbon-free fuel, hydrogen eliminates all CO2e emissions seen from combustion of fossil fuels. Assumptions: GWP20 used for comparison of methane leaked from natural gas and hydrogen in CO2e. EPA methane leakage data taken from EPA and EIA 2019 reporting values. As EPA is a low-range estimate of emissions, an additional estimate for natural gas leakage as seen in the error bar considers a 1.9 percent leakage rate in keeping with estimates from Alvarez et al., 2018. Combustion values taken from EIA. Hydrogen leakage calculated for a hypothetical hydrogen hub, with leakage assumed to occur during production, transmission and storage, and distribution (as production and use will be co-located). Hydrogen GWP20 of 38 used to include both tropospheric and stratospheric effects. Production leakage rates for hydrogen assumed to be 0.1 percent and 2.05 percent for the tightly regulated and unregulated average, respectively. Transmission leakage rates assumed to be 0.04 to 0.05 percent. Storage leakage rates from underground storage are estimated to be 1 percent and 2 percent, respectively. Distribution leakage rates are assumed to be <0.5%.

Even in a non-regulated alternative reality with high leakage rates, hydrogen is still beneficial in our race to decarbonise. Blue hydrogen will provide advantages over its unabated fossil fuel alternatives, but its climate alignment remains more uncertain than that of green hydrogen, given the significant emissions risks from methane leakage and low capture rates.

Developing robust leak prevention technologies through improved connectors, compressors, and storage vessels will enable new systems to be nearly leak-proof. Reliable and cost-effective leak detectors will be important to deploy at scale. Producers are already proactive about minimising and detecting leakage from a safety perspective, but these measurement techniques are more rudimentary and designed to limit ignition risk. More sensitive detectors to monitor small leakage volumes are available, however. Incentives to support wide-scale measurement and reduction of leakage will bolster investment in such technologies as the global race to scale hydrogen intensifies.

Focusing hydrogen development on industry and transport hubs will minimise opportunities for leakage throughout its supply chain. Hydrogen provides the greatest emissions reduction benefits and near-term cost competitiveness in centralised, industrial uses and as maritime shipping fuel. Deploying hydrogen in hubs focused on these end uses will limit the need for transmission and distribution systems and the potential for leaks from such systems. Decentralised uses, such as heating buildings and fuelling passenger transport, would pose greater leakage risks given the larger distribution networks required. These sectors are already better candidates for electrification than fuel switching to hydrogen, and as such should not be prioritised.

With supply chain transparency and proper regulation and planning, hydrogen is an extremely powerful tool to reduce carbon emissions. As the industry grows, coupling incentives to leakage prevention will motivate a low-leakage hydrogen economy, but policy mandates for threshold performance can also play an important role.