Davos 2022: Crude at $110 per Barrel Is ‘Not Sustainable’, Indian Energy Minister Says 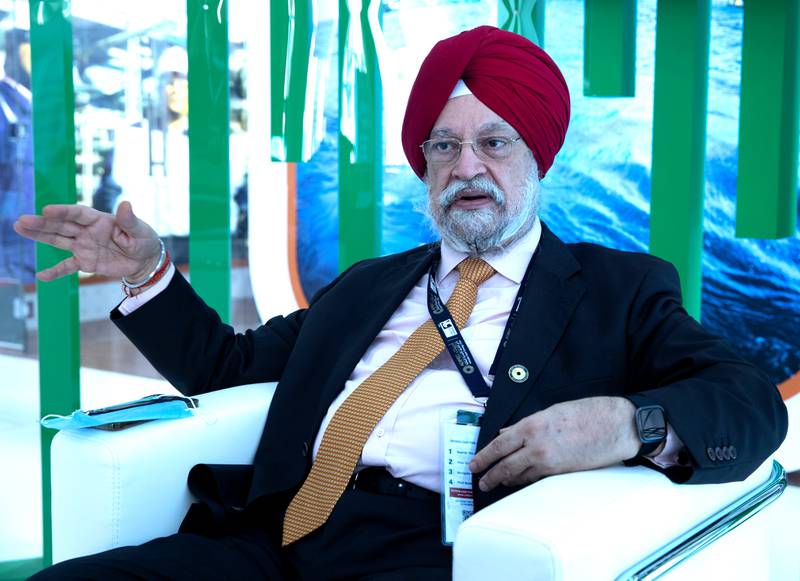 Hardeep Singh Puri, oil and petroleum minister of India, said that transition to greener technologies will happen but it should not be rushed. Victor Besa / The National

Crude oil price at $110 per barrel is not sustainable in the long term as it could lead to overall inflation and affect consumption across countries, India's minister of petroleum and natural gas said on Tuesday.

Oil prices surged this year following the Russia-Ukraine crisis, with Brent crude, the global benchmark for two thirds of the world's oil, rising to a notch below $140 in March over concerns of supply disruptions.

Prices have since cooled, but remain above $110 per barrel.

India, the world's third-biggest crude importer, has been feeling the heat from rising oil prices as its economy is still recovering from the pandemic-induced slowdown, with inflation rising rapidly.

“For a country that imports 85 per cent of its requirement of crude and about 50 per cent of its gas, clearly global prices have a major impact,” Hardeep Singh Puri told a panel discussion at the World Economic Forum in Davos.

However, higher oil prices have also led India to speed up its aim to blend ethanol with petrol, a move that will help the country cut down its crude imports in the long-term.

India, which had set a target to achieve 10 per cent ethanol blending in petrol by the end of 2022, already reached 9.99 per cent this month, the country's Ministry of Petroleum and Natural Gas said.

Encouraged by the progress, the ministry is fast-tracking its next goal of bringing ethanol blending to 20 per cent, said Piyush Goyal, India's minister of commerce and industry, minister of consumer affairs, food and public distribution, and minister of textiles.

“Two weeks ago, Mr Puri has decided to advance the target by five years. So we are going to be achieving 20 per cent ethanol blending by 2025 or 2026,” Mr Goyal said during the panel discussion.

“All of that is making India suffer in the short term but we will benefit in the long run. We are making use of this opportunity to transition. That will also help our farmers. Our farmers get nearly $10 billion worth of additional income with ethanol taking centre stage.”

Consumers are also likely to be open to transition to electric vehicles and adoption could pick up as they see higher prices at pumps, Mr Goyal added.

India has announced plans to tap into renewables to feed its growing power demand. Last year, it said it plans to increase its renewable energy capacity to 500 gigawatts and meet 50 per cent of its energy requirements through non-fossil fuel sources by 2030.

Mr Puri said the transition to greener technologies will happen, but that it should not be rushed.