02 May 2022  by powermag.com
A long-awaited energy strategy published by the UK government on April 6 lays out bold commitments that tackle Great Britain’s multi-pronged challenges, including achieving net-zero carbon emissions while ensuring energy security and affordability. The sweeping plan sharply reverses course on ambitions announced in October 2021 to source 100% of the country’s power from renewable energy. It instead envisions a radical, accelerated expansion of the UK’s nuclear and offshore wind fleet, and delivers a long-term shift that will ramp up domestic production of oil and gas.

Though delayed by political wrangling, the urgency of the new strategy is amplified by a critical power supply (Figure 1) and fuel affordability crisis that is compounded by Russia’s invasion of Ukraine. “The government’s immediate priority has been to provide financial assistance to families and businesses struggling with higher energy bills,” the strategy says. “But when the UK is spending the equivalent of over£1,200 [$1,600] per person this year, just to service the national debt, we cannot afford merely to rely on taxpayer funding to assist with paying ever-higher bills; we need to bring down the bills themselves.” 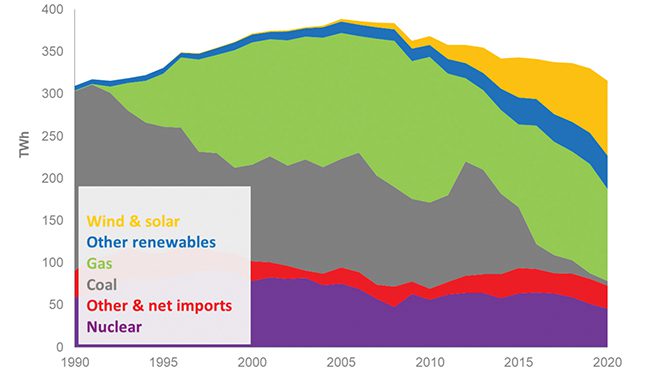 1. The UK’s mix of fuels used to generate power has evolved significantly in recent decades. The country’s total power supply was 22% lower in 2020 than in 2005, reflecting lower demand due to improved energy efficiency. As coal power began to decline in the 1990s, gas-fired generation—from combined cycle gas turbines—soared to replace it, reaching its peak in 2008. Supply from nuclear grew to its peak in 1998 before falling in 2010 due to outages. Renewable generation, mainly from offshore wind, onshore wind, solar, hydropower, and biomass, has steadily increased. Source: UK Statistics Authority
Reversing ‘Decades of Myopia’

To boost its low-carbon energy security, the strategy prominently calls on the UK to “reverse decades of myopia” and target adding up to eight new nuclear reactors to its six existing reactors—potentially tripling its nuclear capacity from the current 8.1 GW to up to 24 GW by 2050. The effort will boost nuclear’s UK generation share from the current 15% to 25%.

Underscoring the urgency of adding what could amount to “a reactor a year,” the government plans to take one project to final investment decision (FID) with£1.7 billion ($2.28 billion) in direct government funding during the current parliamentary session, as well as two other projects to FID in the next parliament. The government said it intends to initiate a selection process for other projects in 2023. “This is not a cap on ambition, but a challenge to the industry to come forward and compete for projects and aim to come online this decade,” the strategy declares.

The UK currently has one nuclear project under construction comprising two EPR reactors at the 3.2-GW Hinkley Point C plant in Somerset, southwest England. However, negotiations are ongoing between the government and Hinkley Point C developer EDF for a replica project at Sizewell C in Suffolk, in eastern England. While the strategy indicates that the government will invest £100 million ($134 million) into Sizewell C, it also calls for investments of up to£210 million ($281 million) to develop small modular reactors (SMRs) with UK-based Rolls-Royce, whose 470-MWe UK SMR recently entered the UK Office for Nuclear Regulation’s generic design assessment process (Figure 2). Rolls Royce, notably, is part of a UK-based industry consortium that has announced plans to build 16 SMRs and wants to roll out the first unit by the early 2030s.

The UK currently has one nuclear project under construction comprising two EPR reactors at the 3.2-GW Hinkley Point C plant in Somerset, southwest England. However, negotiations are ongoing between the government and Hinkley Point C developer EDF for a replica project at Sizewell C in Suffolk, in eastern England. While the strategy indicates that the government will invest £100 million ($134 million) into Sizewell C, it also calls for investments of up to£210 million ($281 million) to develop small modular reactors (SMRs) with UK-based Rolls-Royce, whose 470-MWe UK SMR recently entered the UK Office for Nuclear Regulation’s generic design assessment process (Figure 2). Rolls Royce, notably, is part of a UK-based industry consortium that has announced plans to build 16 SMRs and wants to roll out the first unit by the early 2030s.

2. Rolls-Royce, a nuclear reactor plant designer since the start of the UK nuclear submarine program in the 1950s, raised enough equity to establish its small modular reactor (SMR) business in November 2021 and trigger a £210 million ($281 million) commitment from the UK Research and Innovation funding under the UK’s “Ten Point Plan for a Green Industrial Revolution.” UK nuclear regulators on April 1 began the first step of a generic design assessment for the company’s flagship UK SMR, a 470-MWe pressurized water reactor design. Courtesy: Rolls-Royce
According to the strategy, future nuclear projects could be sited at eight existing designated sites at Hinkley, Sizewell, Heysham, Hartlepool, Bradwell, Wylfa, Oldbury, and Moorside. Along with launching a £120 million ($160 million) fund to “enable” new nuclear, the government intends to set up a nuclear-dedicated vehicle to support new-build projects through development.

“The development and deployment of offshore wind farms still takes up to 13 years,” the strategy notes. The strategy will ambitiously seek to “cut the process time by over half,” potentially reducing government “consent time” from up to four years to one year. The UK may also make environmental considerations “at a more strategic level,” and introduce “strategic compensation environment measures,” including for existing projects, to reduce delays. In addition, the UK will speed up its auction schedule by a year so that the next auction will be held in March 2023.

The strategy also seeks to bolster onshore wind. While the UK already has an onshore wind capacity of 14 GW, and a strong pipeline in Scotland, the strategy envisions grid enhancements in England to support “a number of new projects.”

The government said it will also seek a five-fold increase to the UK’s current solar capacity of 14 GW by 2035. Efforts will include amended planning rules to encourage rooftop solar, ground-mounted solar, and large-scale projects on previously developed or lower value land. In addition, though not explicitly detailed in the strategy, the government will look to exploit the UK’s tidal and geothermal potential.

The strategy attempts to address the island nation’s fuel woes by ramping up domestic production of oil and gas from new projects in the North Sea, as well as potentially developing onshore shale gas reserves. That effort targets a complete phase-out of the UK’s reliance on Russian oil and coal by the end of 2022, and imports of Russian liquefied natural gas (LNG) “as soon as possible.” Instead, the UK plans to deepen fuel import collaborations with Qatar and the U.S., which it hopes will establish the former European Union (EU) member as an important entry point for non-Russian supplies of gas.

As significantly, the energy strategy foresees gas and power exports to the EU through interconnections and LNG terminals. “Gas is currently the glue that holds our electricity system together and it will be an important transition fuel,” the strategy acknowledges. “We are taking a balanced approach to this unique subterranean asset.”

A key facet of this effort will involve developing “hydrogen-ready” infrastructure as well as four carbon capture, utilization, and storage (CCUS) “clusters” by 2030 to “future-proof” North Sea oil and gas supplies. The UK’s first two CCUS clusters in the Northeast and Northwest include an interesting array of gas-fired projects.

Plans notably also call for a 10-GW hydrogen production capacity, at least 50% of which could come from electrolytic projects (including those fed by offshore wind). The government wants to ensure at least 1 GW of electrolytic hydrogen is in operation or under construction by 2025 alongside an existing commitment of up to 1 GW of CCUS-enabled hydrogen.