India’s ambition of creating renewable energy capacity of 500 GW by 2030 cannot be realised without large-scale storage systems. It is generally accepted that conventional battery systems cannot provide an affordable solution. In the search for alternatives, one bright candidate has been the ‘flow battery’, which is modular and hence easily scalable. 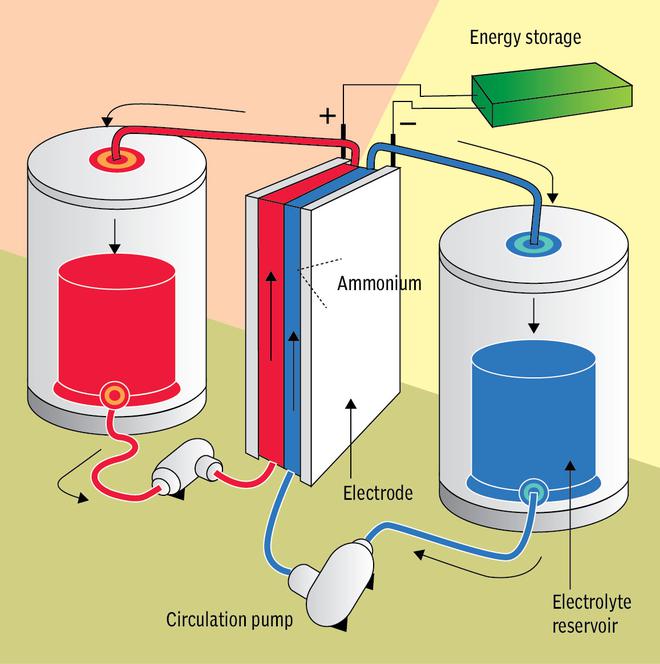 Flow batteries bring some significant advantages. First, they are modular — you can keep increasing the energy storage capacity by simply raising the volume of the electrolyte tanks. If you want more power, you only need to increase the number of membrane stacks. The separation of storage capacity and power is a notable advantage. RP Deshpande, an expert, has compared this to an internal combustion engine in cars. The size of the engine determines the power; if the manufacturer wants the car to go a longer distance in one fuel-fill, he only has to increase the fuel tank size.

Second, they can store power for long durations, which is significant to the seasonal wind industry. Giant tanks can hold large amounts of electrolytes to store more energy. However, the big hurdle to vanadium redox batteries has been the high cost of vanadium, which accounts for more than a third of the system cost.

But now, Prof Kothandaraman Ramanujam of IIT-Madras has developed a flow battery based on lead. Ramanujam tells Quantum that the battery has been found to work well and is market-ready.

The use of lead in energy storage is age-old; the lead-acid batteries are ubiquitous. The world knows how to handle lead.

Furthermore, the metal is cheap and available in India.

Ramanujam’s team has been able to “successfully circumvent” the dendrite growth problem. “Using additives, dendrite growth has been mitigated up to 50 mAh per sq cm of areal capacity, when the battery was cycled at 50 mA per sq cm of current density. The achieved capacity is nearly five times that of lead-acid batteries,” Ramanujam said. The battery has been tested for over 500 charge-discharge cycles. Ramanujam is looking for funding for a pilot plant.

Is this the breakthrough the industry is waiting for? It looks like it, but only a pilot plant can give a clearer picture. The flow battery technology is being sharpened elsewhere in the world, too. Vanadium, the active material for storing energy, has been sought to be replaced with iron (Yang Shi, The Chinese University of Hong Kong), manganese (Prof Ingo Krossing, University of Freiburg), and manganese and sulphur (Dr Barun Chakrabarti, University of Warwick). Just as there are multiple chemistries of lithium-ion batteries, there is perhaps an application-based role for all of these emerging technologies.

“Flow batteries are in early-commercialisation phase and just starting the manufacturing scale-up,” says Dr Rahul Walawalkar, Founder and President, Indian Energy Storage Alliance, and Chair for the Global Energy Storage Alliance, adding, “We do anticipate that flow batteries will be a key part of the solution mix as we move towards net zero.” Walawalkar, however, cautions against too much focus on cost reduction while ignoring other factors such as round-trip efficiency.