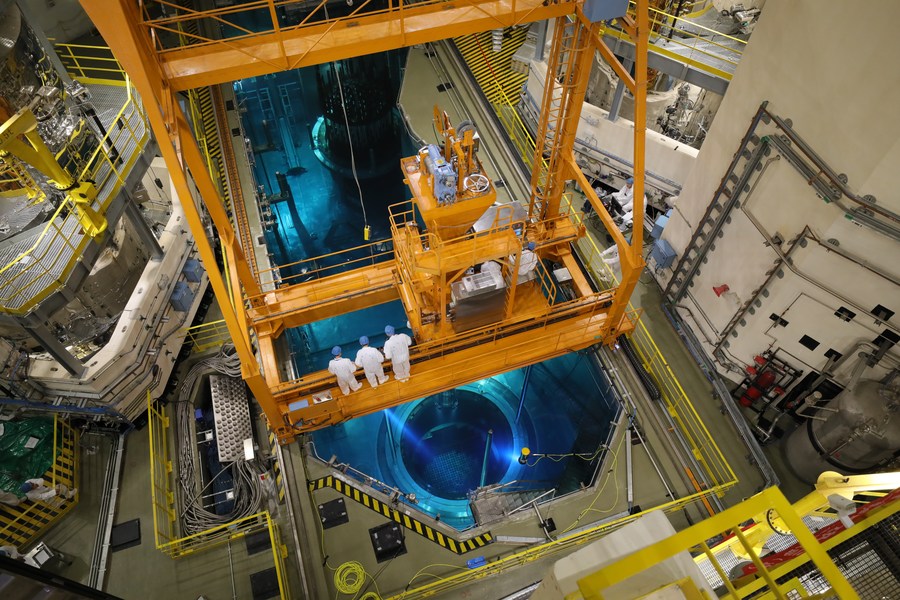 Photo taken on Nov. 6, 2021 shows a view of the No. 6 nuclear power unit in the city of Fuqing, east China's Fujian Province. [Photo/Xinhua]

With the future power supply growth coming mostly from nonfossil energy in China as the country is going through a green energy transition, nuclear power will be crucial for China to reach its carbon peak goal by 2030, said analysts.

After years of preparations, comprehensive assessment and review, approval has been granted for projects of new nuclear power units identified in national plans in Sanmen, Zhejiang province, Haiyang, Shandong province, and Lufeng, Guangdong province, according to a decision made at the State Council's executive meeting chaired by Premier Li Keqiang on Wednesday.

All six units, two for each site, will adopt third-generation nuclear technologies, and this is the first time that China has approved six units at one time since 2008, which illustrates the government's determination to steadily develop nuclear power under the premise of security, said an analyst.

Luo Zuoxian, head of intelligence and research at the Sinopec Economics and Development Research Institute, said nuclear power, together with clean coal and gas power, will play a crucial role in ensuring the stability and consistency of a new power system dominated by new energy in the country.

"As a non-fossil energy, nuclear power has further illustrated its strategic importance in the country's energy mix since last year's energy shortage impact," he said.

"While European countries are already shifting from banning nuclear energy to restarting it and China is also actively developing wind, solar and hydropower on a large scale, there is substantial room for nuclear power in the years to come on the global stage."

Luo believes China will continue to support nuclear energy as an integral part of its energy supply and as the policy direction has been leaning towards nuclear power, the sector is likely to embrace a strategic development period in the years to come.

According to the 14th Five-Year Plan (2021-25) on the country's energy system released by the National Development and Reform Commission and the National Energy Administration in March, the government vows to step up the installed capacity for nuclear power plants in operation to 70 gigawatts by 2025, up from 51 GW at the end of 2020.

The country vows to actively promote the construction and rational deployment of coastal nuclear power projects with an emphasis on security and maintenance of a stable construction pace.

The plan also calls for wider promotion of the use of nuclear energy to heat residential and industrial areas and desalinate seawater, after two cities in China-Haiyang, Shandong province and Haiyan, Zhejiang province-have already successfully achieved commercial nuclear heating during the 2021-2022 heating season.

Demonstration projects of advanced reactor types including high-temperature gas-cooled reactors, fast reactors, modular small reactors and offshore floating reactors should be conducted, while the country should also step up the digitalization of the country's energy system, according to the plan.

China is already the second-largest worldwide in terms of nuclear-installed capacity and generation capacity while it has also become a pioneer in the global nuclear sector with advanced nuclear chain advantages after years of development, said Luo.

Wei Hanyang, a power market analyst at research firm Bloomberg-NEF, said China's approval of the six new reactors in three sites will boost the local economy, given a large sum of new investments.

"Four of them will adopt CAP1000, a Chinese version of US-imported technology, which helps drive upstream industries and research in China," said Wei.

"Another two reactors in Lufeng will adopt China's third-generation nuclear reactor technology Hualong One. This site's units were formerly designed for imported technology from the United States, but it was delayed for over a decade and Guangdong stakeholders eventually decided to move on with China's own prototype."