06 Apr 2022  by Bloomberg
Oil fell as the European Union eschewed sanctions on Russian oil flows for now and a stronger dollar blunted the appeal of commodities. 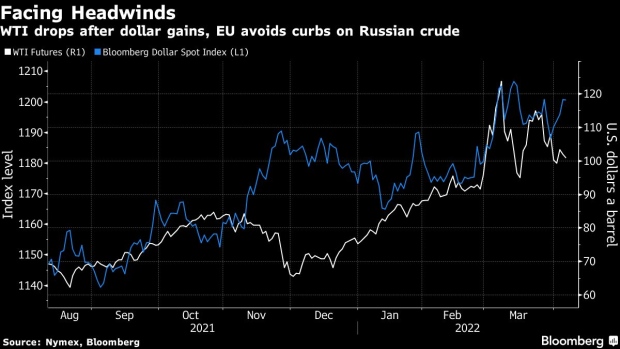 West Texas Intermediate sank below $101 a barrel in early Asian trade after retreating 1.3% on Tuesday. While the EU will press on with additional penalties against Moscow for the war in Ukraine, including a ban on coal, crude won’t yet be targeted. European Commission President Ursula von der Leyen said the bloc will push ahead with a debate among members on targeting Russian oil.

The U.S. currency held gains after jumping on Tuesday as investors digested the prospect of a swift reduction in the Federal Reserve’s debt holdings, part of stepped up monetary tightening to combat soaring inflation. A stronger dollar typically makes commodities priced in the currency less attractive.

Oil surged by a third in the first quarter to hit the highest since 2008 as the Russian invasion and backlash from the EU and U.S. roiled markets. While the U.K. and Washington have moved to bar Russian crude, it’s harder for the EU to follow suit given the region’s far higher level of dependence. Washington and allies have also tapped strategic petroleum reserves to try to calm prices.

Additional downward pressure on crude came from a weekly industry snapshot that pointed to higher U.S. inventories. Figures from the American Petroleum Institute showed a 1.1 million barrel rise nationwide, as well as a gain at the key hub in Cushing, Oklahoma according to people familiar with the data.