US LNG Exports Surge 16% amid Higher Demand From Europe 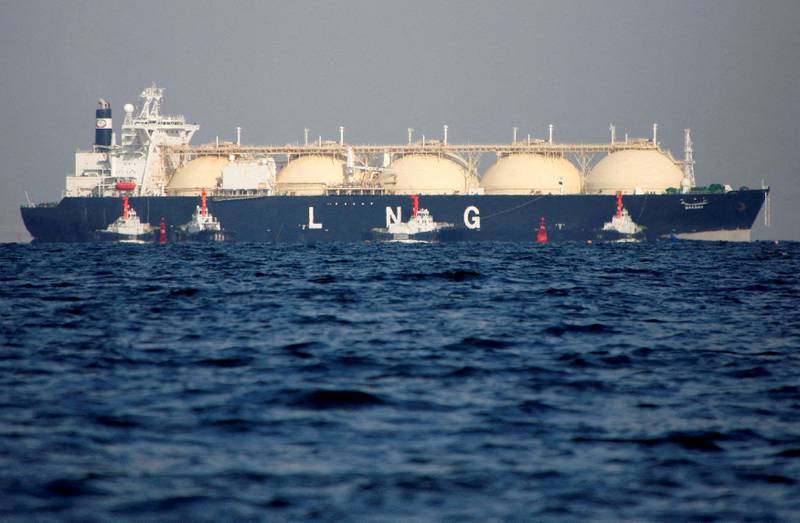 As many as 19 LNG tankers were near or on the way to US Gulf Coast export terminals on Friday, said Refinitiv Vessel Tracking service. Reuters
US liquefied natural gas exports rose nearly 16 per cent last month to a record high, according to preliminary Refinitiv data, with shipments to Europe continuing to dominate.

US LNG is in high demand as European countries try to cut gas imports from Russia after its invasion of Ukraine, while also looking to rebuild low inventories.

Exports to all destinations were about 7.43 million tonnes last month, according to Refinitiv, up from 6.4 MT in February and topping the prior record of 7.25 MT in January.

Europe was the top importer of US LNG for the fourth consecutive month, taking about 65 per cent of US exports. About 12 per cent of exports went to Asia, and 3 per cent to Latin America, the data showed. About 20 vessels responsible for 20 per cent of volume had not signalled a destination.

While US LNG exports to Europe have risen since November, analysts said more was needed, with European gas inventories only about a quarter full, below the five-year average of about 34 per cent for this time of year.

The European Commission has proposed inventories be 80 per cent full by November 1, which could keep demand strong after the winter heating season ends.

Germany said in February that it would build two LNG import terminals and boost reserves to cut dependence on Russian gas.

“In order to manage risks, European countries must follow Germany's example and start a procedure to ration gas demand and prepare for an eventual supply cut,” said Vinicius Romano, an analyst at the Norwegian consultancy Rystad Energy.

As many as 19 LNG tankers were near or on the way to US Gulf Coast export terminals on Friday, according to data from Refinitiv Vessel Tracking service.

Global LNG prices remained high in March, with European prices still drawing demand from Asia. The European LNG benchmark this week traded at $39.22 per million British thermal units (mmBtu), according to Refinitiv, compared to $28.61 per mmBtu for the same week in February.

Asia spot gas this week traded at $35.00 per mmBtu, according to Refinitiv, down from $37.50 per mmBtu for the same period in February.