01 Apr 2022  by powermag.com
As more countries plan on achieving a green energy transition, Iceland offers guidance on how to effectively harness the power of geothermal.

Imagining Iceland without geothermal energy would require turning back the clock half a century. Geothermal energy is a large part of everyday life, and its successful utilization has completely changed living standards throughout the country.

Icelanders use geothermal resources to generate electricity, heat houses and swimming pools, grow food in greenhouses, recycle plastics, and produce a variety of skincare products. Furthermore, geothermal power plants have become a hotbed for innovation that deals directly with future challenges such as capturing carbon emissions.

The U.S. is experiencing increased interest in making use of geothermal resources under the Biden administration, with the U.S. Department of Energy announcing $20 million in funding for geothermal drilling technology projects, and $8.4 million for accessing geothermal potential from abandoned oil and gas wells. The U.S. has the most installed generation capacity of geothermal in the world, with 3,722 MW, and is looking to make even better use of the resource domestically.

As the U.S. and more nations explore solutions to move from fossil fuels to more environmentally friendly energy alternatives, Iceland is leading the way in advocating for a geothermal-fueled future.

In Iceland, all electricity is now produced with renewable energy. Geothermal is a vital part of the energy mix, powering about 90% of the nation’s central heating, and 30% of electricity, with hydropower accounting for the other 70% of electricity. Iceland has both high-temperature and low-temperature geothermal resources, with six geothermal power plants generating electricity (Figure 1). The oldest, Bjarnarflag Geothermal Station, has operated since 1969. 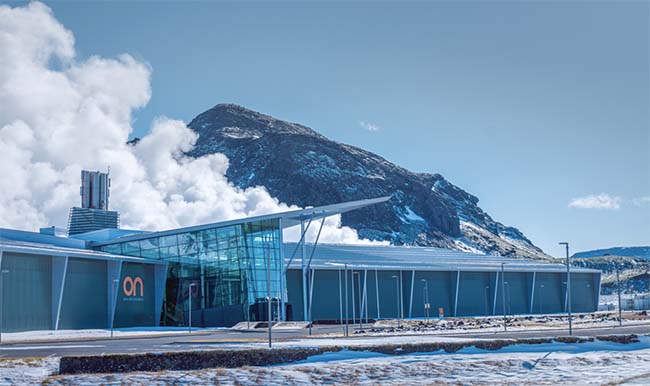 1. ON Power, headquartered in Reykjavik, is one of Iceland’s leading renewable energy companies, with geothermal and hydropower plants. The company’s Geothermal Energy Exhibition at Hellisheidi Power Plant is shown here. Courtesy: Atli Már Hafsteinsson, ON Power
As a baseload renewable energy, geothermal is a good long-term investment for countries that have suitable geothermal resources for electricity production. This is the case in Iceland, but the Icelandic example also shows how important it is to rely on renewable energy for space heating, which requires lower temperature geothermal resources than electricity production, and can be applied in more countries as they move toward decarbonizing their heating systems. For example, the European Union’s work in recent months to make progress toward more sustainable heating and cooling creates an opportunity to incorporate Icelandic solutions.

Iceland’s commitment to clean energy attracted investment from energy-intensive industries such as aluminum smelters, drawn by competitively priced and reliable electricity. Increased demand for electricity from energy-intensive industries was met by utilizing hydropower and geothermal resources. Between 1990 and 2014, Iceland saw a 25% population increase, and a 1,700% increase in geothermal electricity production. In recent years, data centers looking to operate sustainably also have looked to Iceland, where the cool climate allows for free natural cooling, which further lowers their operating costs.

Geothermal power is essential to Iceland’s electricity grid, but the incredible achievement of having 90% of primary energy use in Iceland come from renewables in 2020 is largely thanks to the country’s geothermal district heating system. The political decision to switch from fossil fuels to renewables for space heating was taken during the oil crisis in the 1970s, and required a significant investment in infrastructure. At that time, the decision was made based on the need for energy security, and the economic risk of importing fossil fuels.

Iceland has profited greatly from taking advantage of its geothermal resources. The National Energy Authority estimates that in 2018 the economic benefits of using geothermal energy instead of oil for space heating in Iceland was equivalent to 3.5% of Iceland’s gross domestic product. The accumulated carbon dioxide (CO2) savings of using renewable energy instead of oil in Iceland are estimated at more than 433 million tons. These savings are made possible by harnessing the power of natural geothermal and hydropower resources.

While Iceland has already set a great example for green electricity production and house heating, that is not enough. A third energy transition is underway, this time in transportation. Success is essential for Iceland to realize its goals of reducing carbon emissions by 55% by 2030, achieving carbon neutrality by 2040, and becoming among the first nations to be free of fossil fuels.

Innovative Icelandic companies have made the most of geothermal resources. Along with producing electricity and pioneering geothermal district heating, the geothermal industry has led to ambitious carbon-neutral power production projects, and companies working within the circular economy. This cascading use of geothermal energy has fostered the development of many new companies that operate with a sustainable mindset. 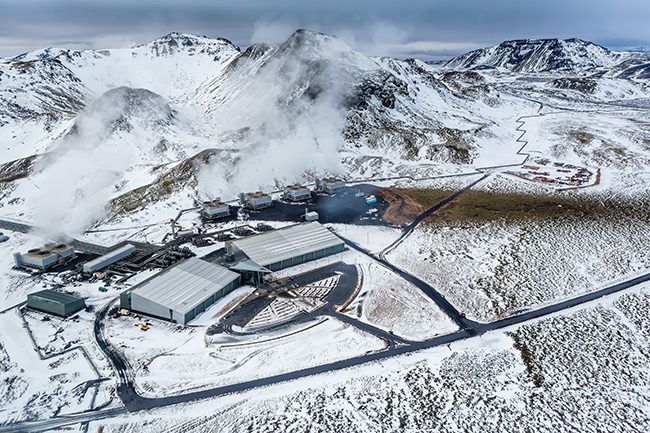 2. The Geothermal Park at Hellisheidi is a circular geothermal power plant, where companies use multiple resource streams to provide electricity, steam, cold water, and other items needed for their manufacturing. The Hellisheidi Geothermal Power Plant was launched in 2006, and has a capacity of 200 MW in thermal power and 303 MW in electricity. Courtesy: Ragnar Th. Sigurdsson, Business Iceland
There are circular parks at geothermal power plants where companies find ways to make the most of all resources in place. The best known are the Resource Park at Svartsengi, and the Geothermal Park at Hellisheidi (Figure 2).

At the Resource Park, the motto is “A society without waste,” and what one company considers waste, another within the park will use in its manufacturing process. The companies that operate there make a point of using the resources responsibly; the businesses include the Blue Lagoon, a geothermal spa, along with cosmetics manufacturers, biotechnology companies, and aquaculture. All use geothermal energy, and many in multiple ways. Their services include fish drying; farming warm-water flat fish by mixing seawater with geothermal water; natural treatments for skin disorders; algae farming; and green methanol production (where carbon emissions from the power plant are captured and turned into green methanol), thanks to Carbon Recycling International’s (CRI’s) Emissions-to-Liquids (ETL) technology, which has become an export product that helps meet the urgent need to remove carbon emissions in hard-to-decarbonize sectors of the economy. CRI is also working on large-scale projects in both China and Norway.

The Geothermal Park also attracts companies looking to use multiple resource streams such as renewable electricity, steam, cold water, and carbon dioxide. Vaxa Impact Nutrition is growing the future of food. This high-tech, indoor algae production facility saves both land and water resources. Its production has a negative carbon footprint, which means it goes beyond achieving net-zero carbon emissions to then create an environmental benefit by removing additional CO2 from the atmosphere.

GeoSilica produces natural silica supplements by extracting various minerals from geothermal water to use in the company’s product development. Carbfix has made global headlines in the past year by successfully binding CO2 emissions into basalt rock in only two years. The Carbfix method was initially tested at the Hellisheidi geothermal power plant, and it also can capture carbon from any industry that has high emissions such as coal, gas, cement, and steel. Theoretically, the technology can be applied almost anywhere there is both basalt and concentrated CO2 emissions.

Another interesting technology making innovative use of geothermal resources is Pure North Recycling, which recycles plastic solely with renewable energy and no chemical additives. The company developed its machines to operate at high temperatures as geothermal steam and waste heat play a major role in the process, and also in the washing and drying phases in the recycling process. The company’s mission is to have a global impact on recycling and sorting, and its new technology emits 75% fewer greenhouse gases, uses 45% less water, and 30% less energy than the European average for plastics recycling.

Iceland’s greenhouses are well-known, and they are heated with geothermal energy, which allows for the stable production of foods in conditions where they would usually not grow. As climate change threatens the security of the world’s food supply, sustainable energy will become a critical component of food production. Geothermal energy offers stability in the production, processing, and value addition of food—be it fisheries, aquaculture, or agriculture.

When developing a geothermal resource, it is important to be sure that the resources truly exist and are extractable in the exact location. Icelandic companies and consultants have been involved in geothermal projects all over the world, including Ethiopia, Kenya, Turkey, Hungary, Germany, El Salvador, Indonesia, and China. As a small nation, Icelanders are used to cooperating effectively with larger partners abroad and Icelandic companies often work together on international projects.

The Icelandic company ÍSOR, Iceland Geosurvey, is well-known for prefeasibility studies, providing consulting services in regard to where geothermal utilization is likely to be profitable. Iceland drilling and Icelandic engineering companies such as Mannvit Consulting Engineers and Verkís offer expert opinions to governments, project developers, energy producers, financial institutions, and investors.

This geothermal expertise is built on decades of experience in Iceland and around the world. By exporting this know-how, Icelandic companies are able to have an outsized impact on the battle against climate change as their projects offer clean energy to larger populations than Iceland’s. For example, Arctic Green Energy has provided an estimated reduction of 16 million tons of CO2 by providing space heating with geothermal to replace coal as an energy source for house heating in China. Reykjavik Geothermal, meanwhile, is taking part in the Tulu Moye geothermal project in Ethiopia. Iceland has also run the Geothermal Training Programme, GRÓ GTP, for students from the developing world since 1978, and 718 fellows have graduated and brought their specialized geothermal science and engineering training back to their home countries to help them realize their geothermal potential.

Making full use of all resources is essential to creating a sustainable future, and geothermal energy is a resource that has potential for upward growth as more nations learn to effectively harness their own geothermal potential. Iceland will continue to lead by example, and through exporting its knowledge in geothermal is working toward that goal both at home and abroad.