31 Mar 2022  by powermag.com
The Biden administration and the European Commission launched a multi-pronged effort that will dramatically ramp up U.S. liquefied natural gas (LNG) exports to the European Union (EU) but also reduce overall natural gas demand in the U.S. and EU through “accelerated market deployment” of clean energy measures.

The measures are part of strategic energy cooperation between the U.S. and EU under a joint “Task Force on Energy Security,” which President Joe Biden and European Commission President Ursula von der Leyen unveiled on March 25. According to the White House, the joint task force will work “to ensure energy security for Ukraine and the EU in preparation for next winter and the following one, while supporting the EU’s goal to end its dependence on Russian fossil fuels.”

The initiative’s launch follows pivotal developments over the past weeks that have shaken up the EU’s long-term fuel supply prospects. Since September 2021, Europe has fielded an acute post-pandemic energy crisis stemming from a “perfect storm” of factors, including a sharp rebound of Asian demand for LNG, various supply constraints, and climate-conscious cuts to upstream investments. The energy crisis has sent European power prices skyrocketing, and generally ramped up energy price volatility and security over the medium and long term.

But issuing a firm response to Russia’s large-scale invasion of Ukraine, the European Commission on March 8 proposed a plan, dubbed “REPowerEU,” to slash the EU’s reliance on Russian gas by two-thirds this year and make Europe independent from Russian fossil fuels “well before 2030.” REPowerEU seeks to diversify the EU’s gas supplies, speed up the rollout of renewable gases, and replace gas in heating and power generation.

However, experts have noted it is ambitious. As of early March—when the EU’s wholesale gas prices were around 200% higher than a year ago—the EU relied on natural gas, oil, and coal imports that amounted to 57% to 60% of gross energy consumption. Although the region has significantly ramped up renewable sources, owing to declining production of EU coal (lignite), it relies on imports for 90% of its natural gas consumption, 97% of its oil consumption, and 70% of its hard coal consumption. Russia provided about 45% of the EU’s total gas imports in 2021, with Norway meeting 23%, Algeria 12%, the U.S. 6%, and Qatar 5%. In the hard coal sector, though import volumes have declined in recent years, Russia remained the leading supplier in 2021 with a 46% share, followed by the U.S. (15%), and Australia (13%).

The EU, notably, has in recent years attempted to diversify its gas supplies through increased gas interconnection capacity (including reverse flow capabilities), and engaging with a range of partners, including the U.S., Norway, Qatar, Azerbaijan, Algeria, Egypt, Korea, Japan, Nigeria, Turkey, and Israel. In February, the EU said new supply agreements resulted in “record volumes” of LNG imports in January and February, though it noted it has the potential to import a further 50 billion cubic meters (bcm) of LNG on a yearly basis. 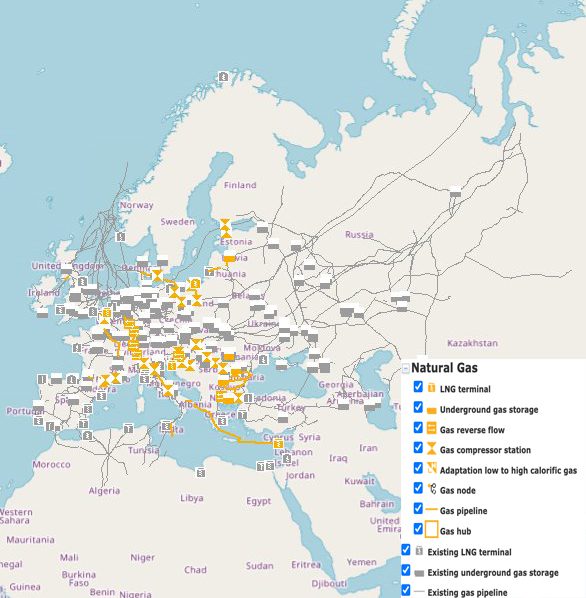 An interactive map under the European Union’s PCI Transparency Platform shows natural gas projects of common interest. The gray lines indicate existing gas pipelines while the orange lines show planned pipelines. Source: European Commission
Under the joint Task Force on Energy Security unveiled on Friday, the U.S. said it would work with international partners to strive to ensure additional gas volumes of at least 15 bcm in 2022, “with expected increases going forward.” The U.S. also notably committed to enabling a “regulatory environment with procedures to review and expeditiously act upon applications to permit any additional export LNG capacities that would be needed to meet the emergency energy security objective.” The European Commission, meanwhile, said it would work with EU member states to ensure stable demand for additional U.S. LNG until at least 2030 of about 50 bcm per year.

That potential, however, will be predicated “on the understanding that the price formula of LNG supplies to the EU should reflect long-term market fundamentals and stability of the cooperation of the demand and supply side, and that this growth be consistent with our shared net-zero goals,” the EU said. “In particular, price formula should include consideration of Henry Hub Natural Gas Spot Price and other stabilizing factors,” it noted.

The boost in export volumes of 15 bcm this year and 50 bcm by 2030 could essentially establish a “virtual LNG pipeline” to Europe, noted Charlie Riedl, executive director of the Center for Liquefied Natural Gas (CLNG), a trade group comprising all aspects of the U.S. LNG supply chain. For context, U.S. LNG exports to the EU in 2021 were about 22 bcm, while Russia sent a total of 155 bcm to Europe. But sourcing additional LNG volumes with urgency may be compounded by U.S. liquefaction capacity.

According to the Energy Information Administration (EIA), while U.S. LNG exports set a record high in 2021 (averaging 9.7 billion cubic feet per day [Bcf/d], or 0.27 bcm/d), liquefaction at the six U.S. LNG export terminals averaged 102% of nameplate (or nominal) capacity and 89% of peak capacity. The EIA’s March-released Annual Energy Outlook 2022, however, suggests U.S. natural gas production will increase to meet growing LNG export demand. “We project global demand for natural gas will continue to be high, making it more economical to build additional LNG export facilities in the United States. These LNG capacity expansions, coupled with increasing demand for natural gas abroad, result in an increased forecast of LNG exports to 5.86 trillion cubic feet by 2033 in the Reference case, up 65% from current levels,” it said.

But to move forward, “we will need regulatory certainty and [Federal Energy Regulatory Commission] and [Department of Energy] assistance,” Riedl said. “The LNG industry can build, but regulators must do their part to help expedite the essential infrastructure that is needed here and in Europe to meet these ambitious goals and help our European allies,” he added. 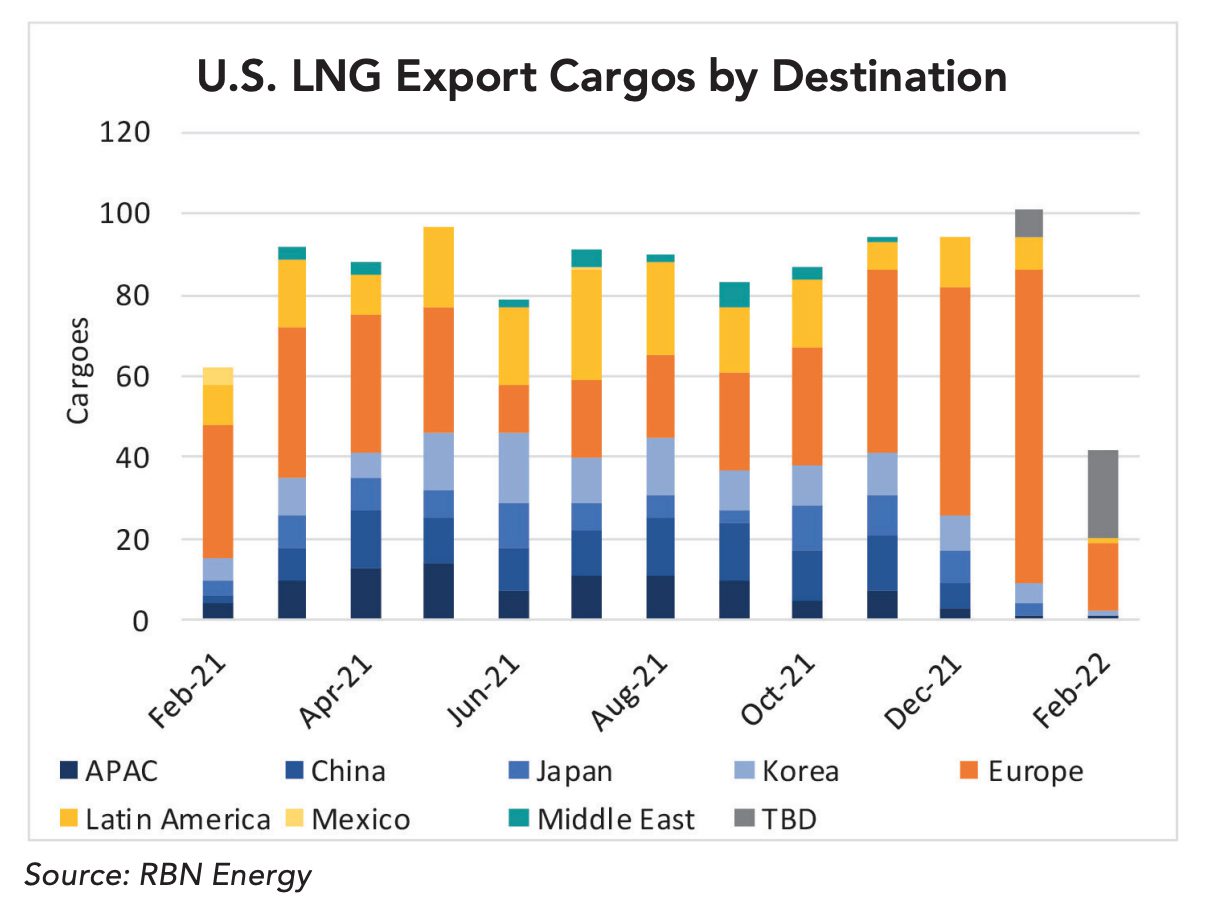 The Center for Liquefied Natural Gas (CLNG) noted that the U.S. has sent the bulk of its LNG cargoes to Europe throughout its energy crisis. In February, Europe received nearly 70% of all U.S. LNG cargoes. Courtesy: CLNG/RBN Energy
The EU said it has already taken steps to prepare an upgraded regulatory framework. A significant proposal on energy storage, for example, seeks to ensure that existing storage infrastructure is filled up to 90% of its capacity by Nov. 1 each year, with specific phase-in provisions for 2022. The European Commission on Friday said it will work with EU member states to accelerate regulatory procedures to review and determine approvals for LNG import infrastructure, to include onshore facilities and related pipelines to support imports using floating storage regasification unit vessels, and fixed LNG import terminals.

According to Riedl, the EU’s actions indicate the region could “accelerate the regulatory approval process,” and support long-term contracting mechanisms with U.S. LNG suppliers. That will “send a strong signal to our allies in Europe that they can count on U.S. LNG to help with energy security and climate leadership well into the future,” he said.

The U.S. and the EU on Friday separately underscored the joint task force’s commitment to reduce greenhouse gas (GHG) intensity of all new LNG infrastructure and associated pipelines. Efforts will include “the use of clean energy to power onsite operations, the reduction of methane leakage, and the construction of clean and renewable hydrogen ready infrastructure,” the White House said.

Both the U.S. and European Commission also said they would engage key stakeholders, including the private sector, “to formulate immediate recommendations that will reduce overall gas demand through accelerating market deployment and utilization of clean energy technologies.”

According to the European Commission, efforts on this front could include partnering on technologies and energy efficiency solutions (like demand response devices, and heat pump deployment and installations), scaling procurement for clean energy equipment, investing in innovative technologies, and fuel-switching away from fossil fuels.

“The REPowerEU plan estimates that reductions through energy savings in homes can replace 15.5 bcm this year and that accelerating wind and solar deployment can replace 20 bcm this year, and through EU’s existing plans such as ‘Fit for 55’ contribute to the EU goal of saving 170 bcm/year by 2030,” the White House noted.

Both the U.S. and the EU will also work to expedite planning and approval for renewable energy projects. The task force will, for example, establish a strategic energy cooperation for offshore wind technologies. Both regions will also collaborate on renewable hydrogen deployment as a replacement for “unabated” fossil fuels, including technology and supporting infrastructure.