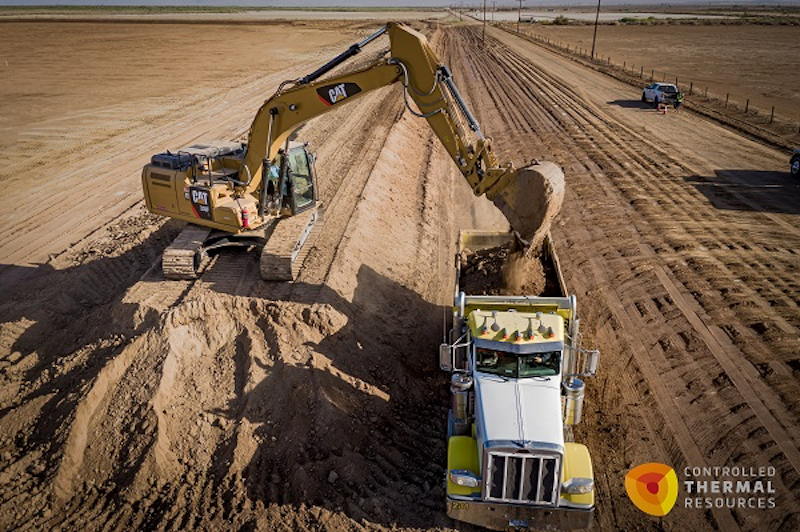 Work continues on Hell's Kitchen Lithium Geothermal Project, Salton Sea (source: CTR)
An article written by Bryant Jones from Boise State University and Michael McKibben of University of California, Riverside, discusses how the entire lithium demand of the U.S. can be supplied by geothermal industry  – if the technology can be developed. However, the authors also cite the challenges that are holding back further development of geothermal industry in the country. The whole article can be read thru this link.

As demand for lithium for batteries continues to grow, the US finds itself becoming heavily reliant on imports from other countries such as China, Russia, Chile, and Argentina. This makes existing lithium supply chains vulnerable to geopolitical risks, especially in light of Russia’s war in Ukraine and the close ties between Russia and China.

One way to develop a stable domestic lithium supply is to tap into the country’s geothermal resources specifically in California’s Salton Sea. In the Salton Sea plants, the geothermal brines contain about 30% concentration of dissolved solids.

If the test projects can extract lithium from these brines, the 11 existing geothermal plants in the Salton Sea can supply more than 10 times the current lithium demand of the U.S. At full production capacity, these plants can generate a bout 432 MW of electricity and 20,000 tons of lithium per year.

However, geothermal has become a stagnant energy technology in the U.S. mostly because of a lack of policy support. Risk mitigation policies can greatly benefit the industry, especially if they can lower drilling costs or provide tax incentives or more secure long-term power contracts. The addition of metal extraction from geothermal brine can give geothermal projects a new competitive advantage and help the industry get more favorable policies.

We had previously reported on the research being done by the US Lawrence Berkeley National Laboratory to quantify and characterize the lithium resources in the geothermal reservoir in the Salton Sea. This is project that has been funded by the Geothermal Technologies Office of the US Department of Energy.