How Putin’s War Has “Turbocharged” Green Hydrogen, and Long Term Shift From Fossils 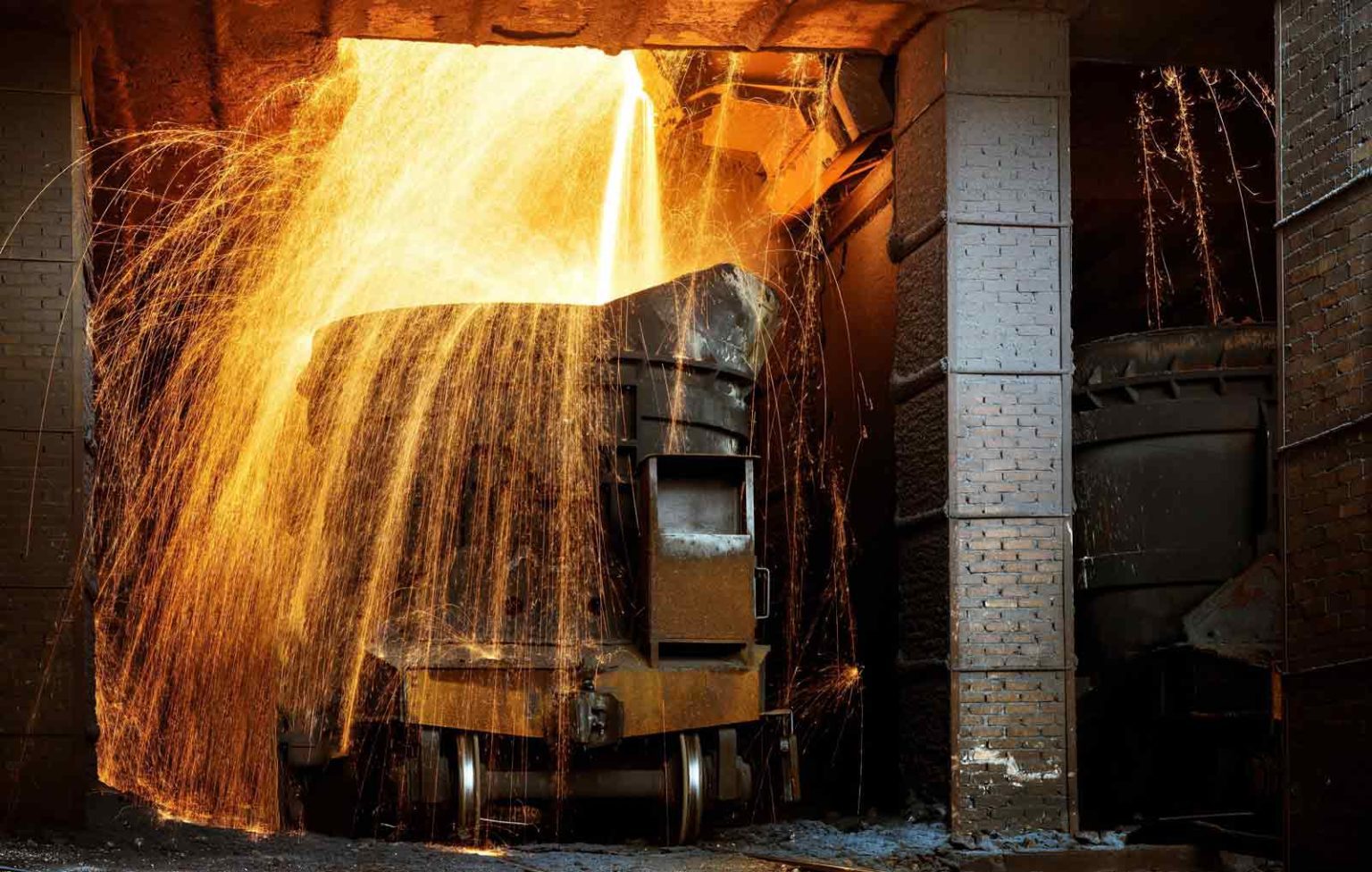 (Credit: Canva).
Much has been written about the unintended boost Russia’s invasion of Ukraine might lend to the global shift to renewables, but two new reports from leading market analysts have singled out green hydrogen as a sector that stands to be “turbocharged” as a result of the conflict.

The reports, from Bloomberg New Energy Finance and Rystad Energy, explain that soaring gas prices, driven up by the Russia-Ukraine war, have – as BNEF puts it – “opened a rare opportunity” for renewable electricity to make hydrogen and hydrogen-derived products more cheaply than gas.

BNEF, in a report published at the start of the month, said that since Russia’s invasion of Ukraine on February 24, 2022, European gas prices have jumped to more than six times higher than the value over the same time period in 2021.

Gas import prices in Asia, meanwhile, have charted a nearly five-fold increase over the same period last year, while US gas prices have jumped by 60 per cent.

This has in turn driven up spot prices for ammonia, a gas-derived product primarily used for fertiliser, and those rising “grey ammonia” costs have in turn opened the door for “green” production processes, which rely on renewable electricity to make hydrogen.

“In Europe, BloombergNEF’s analysis suggests that a delivered hydrogen price of $US6.59 per kilogram is now sufficient to make green ammonia cheaper than ‘grey’ ammonia made from unabated natural gas on a short run marginal cost basis,” the report says.

“This is just enough for a green ammonia facility in Germany to be competitive: BloombergNEF estimates the cost of hydrogen produced from western alkaline electrolysers and powered by onshore wind to be $6.18/kg.”

Similar economics could be achievable in Spain, the report adds, but the best outcome would be in India, where BloombergNEF’s numbers suggest green ammonia production would have been cheaper than gray ammonia for 128 days between January 1, 2021 to March 2, 2022 – or 30% of the time.

“An existing 350 metric ton per day green ammonia facility would have saved over $7.1 million since November 1, 2021 compared to a gray ammonia site,” the report says.

Rystad’s report, published this week, says Russia’s actions in Ukraine have “turbocharged” the renewable hydrogen sector, as the cost of blue and grey hydrogen surge in line with rising fossil fuel prices.

“Green hydrogen production was already set to take off this year globally and pass the 1GW milestone in 2022,” the report says.

“However, the war in Ukraine has turbocharged the sector. Green hydrogen’s potential win comes at the expense of its fossil fuel-linked blue and gray alternatives, whose costs have increased by over 70% since the start of the war in Ukraine, rising from about $8/kg to$12/kg in a matter of days.” 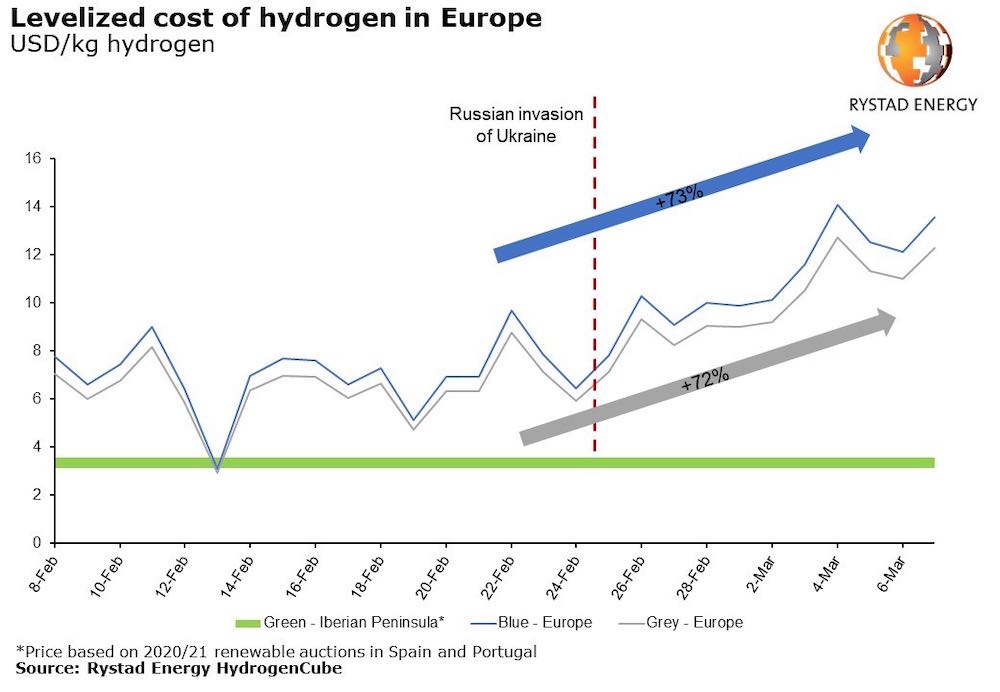 Rystad notes that while some countries are focused on domestic renewable hydrogen usage, others are focusing on exports, suggesting a major shift from a world where energy is sourced from a few key regions, to a world where production is more spread out.

“The decade ahead is a make or break one for the green hydrogen sector,” the report says. “If production can be increased as planned to more than 10 million tons globally by 2030 and costs cut to $1.5/kg or less, then the industry will become a permanent fixture of the global energy mix.”

Minh Khoi Le, Rystad Energy’s head of hydrogen research, says that while industry and governments are headed in the right direction, the key challenge is to lower the risks for green hydrogen investors and put in place incentives to rapidly scale up both demand and supply.

“Fundamentally, a world where green hydrogen fulfills the role currently played by oil, gas and coal will look very different,” he said.

And in Australia, the opportunity Russia’s actions are affording green hydrogen is not going unnoticed, either.

In a speech to the 2022 Australian Hydrogen Forum on Thursday in Sydney, Ai Group CEO Innes Willox said that the Russia-Ukraine conflict would deliver “two very big boosts” to the hydrogen sector.

“The first is to its immediate cost competitiveness. … On a fuel cost basis new green hydrogen now looks cheaper than spot gas overseas,” he told the conference. “Green hydrogen has gone from three quarters of the price of diesel to half the price.

Willox said the second boost the war would deliver to renewable hydrogen was to the speed of long-term cost decline.

“Every doubling of global installed electrolysis capacity slashes the cost of the next doubling as manufacturers and supply chains learn and scale up. So as Europe and others deploy more hydrogen in response to high fossil energy costs, we should expect cost reduction goals to be hit earlier than past forecasts.”

And while Willox also noted that there were still significant “growing pains” ahead for the green hydrogen industry, the very least the Russian invasion of Ukraine would do was inject a sense of urgency into the global transition away from fossil fuels.

“The invasion of Ukraine has unleashed immense upheaval in energy, trade and global security,” he said.

“Geopolitical, economic and climate factors are now lined up to require an accelerated transition from oil and gas starting in earnest this decade.

“Hydrogen is well placed to provide big chunks of that transition. But both the supply and demand sides need to get on with it – and government needs to play its part.”