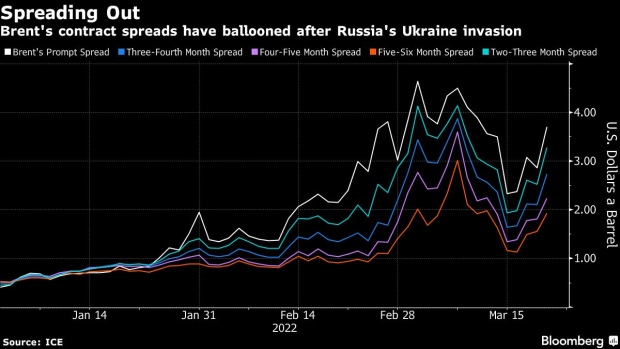 Oil climbed for a fourth day, heading for the best run in a month, on signs the European Union may be edging closer to a ban on Russian crude imports to punish Moscow for its invasion of Ukraine.

West Texas Intermediate topped $114 a barrel in early Asian trading after surging 18% over the previous three days. Josep Borrell, the EU’s foreign policy chief, said he expects leaders to discuss, but probably not yet approve, further sanctions against Russia when they meet in Brussels later this week.

Crude has soared in the wake of the invasion as crude buyers shunned Russian cargoes, and the U.S. and U.K. moved to prohibit purchases. The EU is the largest consumer of crude and fuel from Russia, and the Kremlin warned any ban would have a profound effect on the market and hit the continent hardest.

There’s a lack of unanimity among EU members on targeting Russian oil. Germany is reliant on crude imports from Moscow and has so far rejected an embargo, and Hungary is also against it. Any decision would need to be agreed by all 27 states. Europe’s leaders are set meet on Thursday.

Energy markets “remain on edge as the restrictions on Russia exports continue to build,” Australia & New Zealand Banking Group Ltd. analyts Daniel Hynes and Soni Kumari said in a note. That’s reflected in forward curves remaining steeply backwardated, they said, referring to a bullish pattern in which prompt prices trade above those further out.

Brent’s so-called prompt spread -- the differential between its two nearest contracts -- expanded to $3.70 a barrel in backwardation on Monday. That’s up from $2.86 a barrel on Friday, and 41 cents at the start of the year.

Vitol Group, the world’s biggest independent oil trader, warned that it expects energy prices to remain elevated as it reported a jump in revenues. “The physical energy markets were already tight as we entered the current crisis,” Chief Executive Officer Russell Hardy said.

The jump in oil is fanning already-elevated inflation in economies around the world, complicating the task for monetary policy makers including the Federal Reserve. Chair Jerome Powell said on Monday the U.S. central bank is prepared to raise interest rates by a half percentage-point at its next meeting if needed.