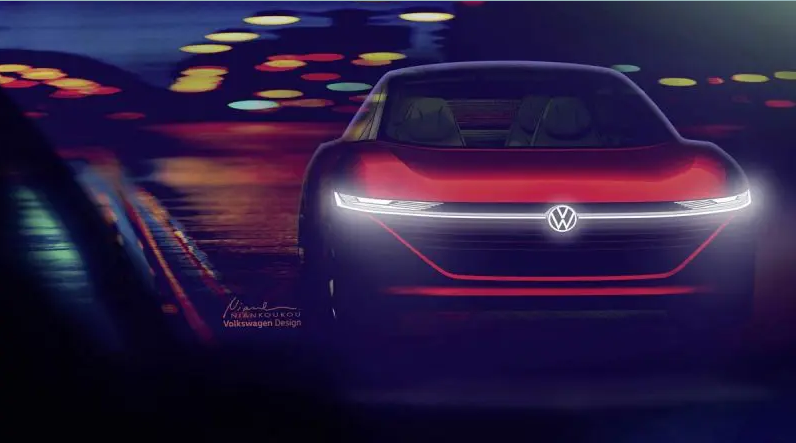 ID.VIZZION RENDER BY LIGHT DESIGNER KOUKOU NIAN, LIGHT DESIGNER FOR VOLKSWAGEN.
Hot on the heels of the ID.Buzz electric microbus debut, Volkswagen CEO Herbert Diess has let drop that the German carmaker will launch a new mid-sized electric sedan in 2023.

Based on Volkswagen’s ID.Vizzion concept that first made an appearance at the 2018 Geneva auto show and was followed up in at the 2019 LA auto show in a wagon format called the ID. Space Vizzion, the new electric sedan was dubbed in its development phase as the “Aero B”.

Now, German Motor1 reports that VW boss Herbert Diess gave an insight into the brand’s future electric vehicle plans during its annual media conference, confirming that the Aero B will be launched in 2023.

The confirmation was accompanied by some blurry images that show a similarity to the front of the 2019 ID. Space Vizzion concept, which had no doubt been further refined since the ID.Vizzion was first debuted in 2018.

The upcoming production Aero B is considered an electric alternative to the Passat; while this is only available in Australia now as a wagon, it is still available in Europe as a sedan.

While a definite name for the future EV is as yet unknown, it is unlikely the Aero B will called this when it goes to market; in keeping with other MEB-based electric vehicles it will more likely be called the ID.7 or ID.Aero.

And, though a production version of the ID. Space Vizzion electric wagon is not yet confirmed, Motor1 posits that is possible the Aero B may also be introduced as five-door hatch if the images showing a shorter vehicle with hatch-like rear end during the conference are anything to go by.

The production Aero B will precede the Trinity sedan, which will serve as Volkswagen’s new flagship and will be the brand’s first car to be based on the SSP architecture. The Trinity sedan will be made at a new 2 billion euro ($A3 billion) factory to be built in Wolfsburg near Volkswagen’s existing Tiguan and Golf factory, with production set to commence from 2026.