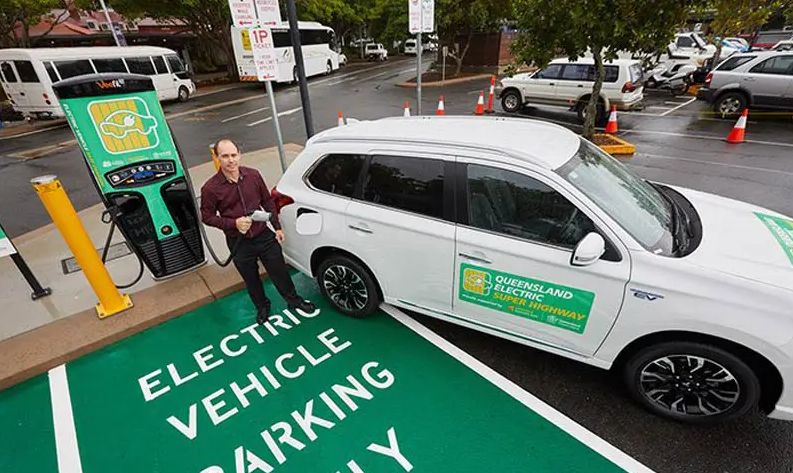 CAIRNS CHARGE POINT FOR THE QUEENSLAND ELECTRIC SUPER HIGHWAY. SOURCE: TRITIUM
The Queensland state government has set a target for all new car sales to be electric by 2036, and all new government vehicles to be electric b y 2028, as part of a new Zero Emissions Vehicle Strategy and Action Plan.

The strategy was unveiled on the same day as a new $3,000 rebate for 15,000 new vehicles priced at $58,000 or below, and another $10 million was announced to support the rollout of new EV chargers across the state.

It also confirms that 100 per cent of eligible Queensland Government fleet passenger vehicles to be zero emission by 2026, and that every new  TransLink funded bus added to the fleet will be a zero emission bus from 2025 in South East Queensland and from 2025-2030 across regional Queensland.

It says this will improve air quality, mean quieter neighbourhoods and streets, and deliver improved health outcomes for the community and the broader environment. It will also slash emissions in the transport sector, which is the second biggest contributor in the state after electricity.

And the transition of the government fleet will create a second hand market for the general public.

“Transforming the QFleet will save Queenslanders millions in fuel costs but most significantly, when they have done their service with frontline workers – our nurses, community carers and educators – these high quality, fully serviced, usually low kilometre used vehicles will be available for Queenslanders at highly affordable prices,” energy minister Mick de Brenni said.

“That will deliver a clear signal and pipeline to car manufacturers, battery and minerals manufacturers and charging infrastructure manufacturers that Queensland is the place to grow their business and continue to build on our States’s successful jobs and economic results.”

“Queensland is one of the sunniest and windiest places on earth and can become a renewable energy superpower, creating a sustainable jobs boom.”