14 Mar 2022  by electrek.co
According to a new filing with the EPA, Tesla is preparing to launch a new version of the Model Y with a puzzling range of 279 miles and an AWD powertrain.

Could it be the new Model Y with 4680 cells and battery pack built at Gigafactory Texas?

The EPA has released a rating on a new version of the Model Y.

The EPA lists another version, the Model Y Standard Range RWD, which Tesla briefly offered last year before discontinuing it after CEO Elon Musk said he wasn’t satisfied with the range.

Now the EPA added another version of the Tesla Model Y to the list of 2022 models, and it’s an interesting one, especially with the imminent launch of the Model Y made at Gigafactory Texas. 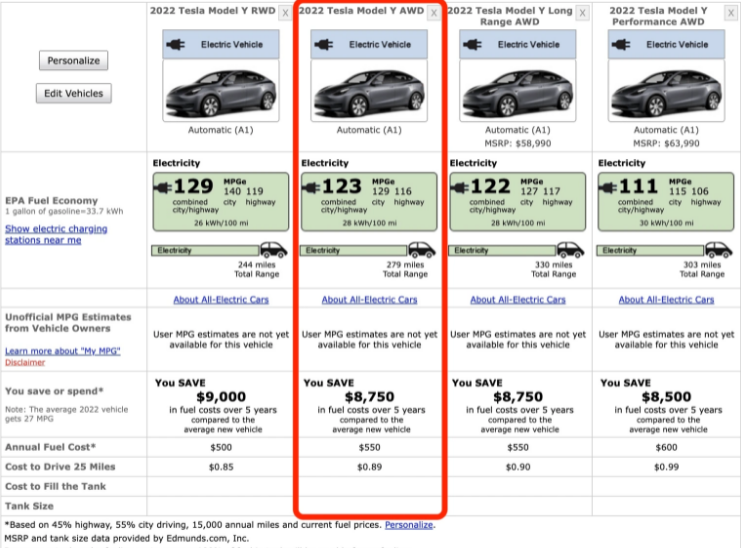 As you can see, it is listed with an EPA-rated range of 279 miles on a single charge – significantly less than the current Model Y Long Range AWD at 330 miles of range.

Therefore, it appears to be a dual motor powertrain Model Y with a smaller and slightly more efficient battery pack.

While it can not be confirmed right now, the leading theory, due to the timing, is that this could be the new Model Y that Tesla is starting to produce at Gigafactory Berlin.

This new version of the electric SUV is going to be equipped with Tesla’s own 4680 battery cell and a new structural battery pack. These changes are expected to affect the specs, so either Tesla tries to match them to existing versions or offers a different one, which could be the case with this new Model Y AWD.

We are expected to get more details once Tesla starts deliveries from Gigafactory Texas, which is expected to happen by the end of the month.