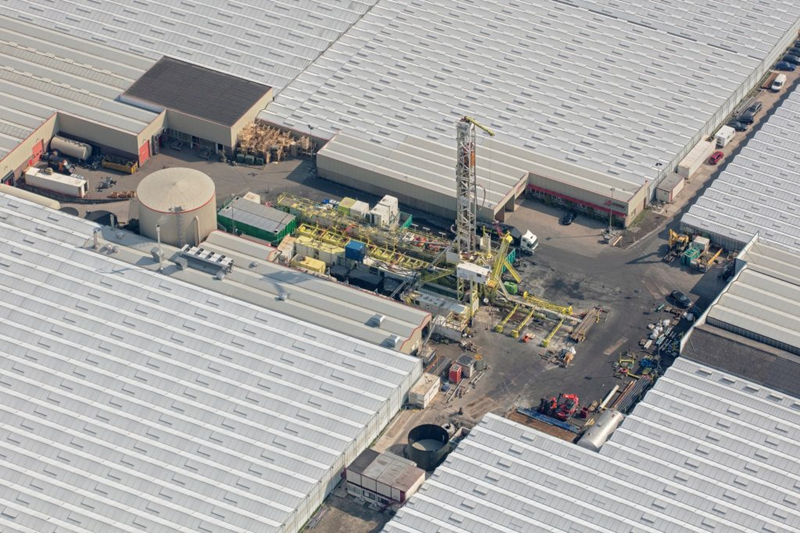 Drilling rig in between greenhouses, Netherlands (source: Huisman)
Over time, geothermal energy could meet a large part of the heat demand in the Netherlands, especially in greenhouse horticulture, and make a substantial contribution to the energy transition, so the geothermal industry association Geothermie Nederland. In order to keep up the momentum, the association is conducting intensive consultations about removing bottlenecks in, among other things, granting subsidies, granting permits and legislation, so an article in local publication Nieuwe Oogst.

Geothermie Nederlands expects that geothermal energy can provide 25 percent of the Dutch heat requirement in the future and more than 50 percent for greenhouse horticulture. But a number of bottlenecks threaten to throw a spanner in the works, such as the four-year term by which a project with SDE++ subsidy must be operational at the latest.

Chairman Hans Bolscher explains that this is often not feasible due to delayed permit granting or the complexity of the heat demand. ‘That could mean that a project, in which tons of money has already been invested, has to stop and that specialist companies move abroad because too few projects get off the ground.’ That is why Geothermie Nederland proposes to extend the term for the SDE++ subsidy to six years.

The new drilling location of Greenhouse Geopower in the Koekoekspolder horticultural area in IJsselmuiden in Overijssel is a project that was in danger of coming to a standstill. Project director Radboud Vorage explains that it took two and a half years before approval for the extraction plan was finalized, while on paper it takes six months.

“[The project] continues to navigate in a field of tension with different interests”, so Ewald Pelser, Director of Wayland Energy.

Because Bolscher and chairman Adri Bom-Lemstra of Greenhouse Horticulture Netherlands contacted the Ministry of Economic Affairs and Climate (EZK) in good time, Vorage has prevented projects from losing their SDE decision unnecessarily. ‘It’s as if you don’t get a cross in the Elfstedentocht, because you cross the finish line just after midnight. All the effort for nothing.’

Last autumn, the necessary permits for the Koekoekspolder were issued just in time, so that drilling can start in April. Vorage understands the slow progress of the permit process, because geothermal energy is still a ‘new branch of sport’, for which there were no clear assessment criteria yet.

Officials have worked hard on this, according to Vorage, but in the meantime valuable time has been lost, not only for the geothermal energy company, but also for their customers. They were waiting for geothermal energy to make their companies more sustainable, especially when natural gas prices started to rise sharply.

As a second bottleneck, Bolscher mentions the Mining Act , which is currently still based on the extraction of oil and gas. Geothermie Nederland is in talks about amending the law with the Ministry of Economic Affairs and Climate Policy and The Hague politicians. These concern deadlines, better standards and the role of parties such as the State Supervision of Mines, TNO, the Mine Council, municipalities and provinces.

‘The government sees the importance of geothermal energy and would like to contribute ideas, but that is happening more slowly than we would like. On the other hand, we’ve only been seriously involved with geothermal energy for about ten years and it’s really starting to take shape,’ says the chairman of Geothermal Netherlands.

The granting of SDE++ subsidies is also a thorny issue. Bolscher is in intensive discussions with members of the House of Representatives and the Ministry of Economic Affairs and Climate Policy about changes to the current system, so that it is more in line with what is needed for geothermal energy.

‘The new coalition agreement provides sufficient starting points for this. Before 2023 there will be ‘gates’ between various SDE areas. Before 2022 we are still lobbying hard to get SDE subsidy for geothermal energy available now as well.’

Piet Broekharst, program manager Greenhouse as Energy Source at Greenhouse Horticulture Netherlands, outlines that no SDE++ subsidy has been awarded to geothermal energy projects in greenhouse horticulture for two years. According to him, the subsidy, intended to finance the unprofitable top of projects, is based on an incorrect heat reference.

‘The ministry calculates with a heat price that is too high, so that the expected savings for geothermal energy projects are unrealistically high and the subsidy is too low. Something really needs to be done about that, because thirty projects in greenhouse horticulture are in the pipeline until 2030.’

Wayland Energy in Bergschenhoek in South Holland develops geothermal energy projects for greenhouse horticulture, among others. According to director Ewald Pelser, market conditions determine which heat source growers use.

‘Many factors play a role in geothermal energy projects, such as the gas price, but also the early involvement of local residents. As a result, you can often avoid objections to permits, which mean a huge delay in project progress. It continues to navigate a field of tension with different interests.’

The high gas price worries Bolscher because of the way in which it is settled in the SDE++ subsidy. ‘That is disappointing and nobody knows whether this is structural. But we do not want to deviate from the straight path with our industry and continue to look together with the government on how we can contribute to the energy transition. Geothermal energy remains a sector with enormous potential.’