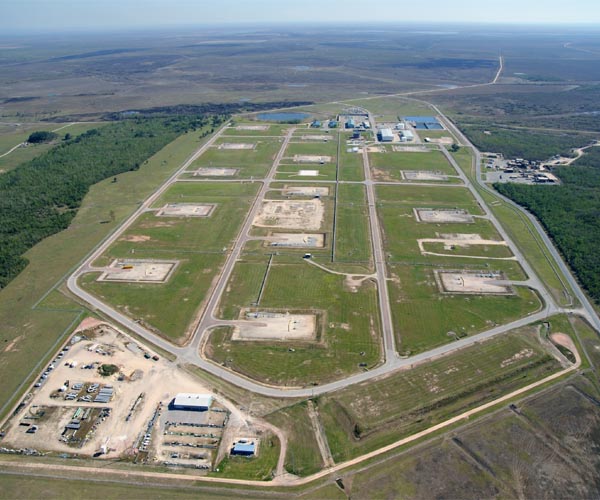 File image showing a US strategic oil reserve facility
With the war in Ukraine causing oil prices to soar, US President Joe Biden's administration is treading a fine line between staying true to its commitment to clean energy, while seeking to ramp up petroleum production.

Energy Secretary Jennifer Granholm called on oil producers to open the taps to deal with the immediate crisis, but said that does not undermine the longer term goal of weaning the country off fossil fuels.

"We can walk and chew gum at the same time," said on Wednesday at the CERAWeek energy conference in Houston.

Industry participants bristled at the comment, saying the government's energy and environmental policies had been creating issues for months before Russia's invasion of Ukraine caused the most-recent surge in prices.

"The Biden administration continues to blame everybody but themselves for the increase in gasoline prices," said Phil Flynn, oil market analyst for Price Futures Group.

"They were blaming supply chains issues and now they're conveniently blaming (Russian President) Vladimir Putin," despite steps like canceling permits for the controversial Keystone XL Pipeline and drilling moratoriums on federal land, he said.

However, the White House has stressed that many of the permits already issued to oil companies have been left idle.

According to the Center for Biological Diversity, the Biden administration approved 3,557 oil and gas permits on federal lands in 2021, "far outpacing the (former president Donald) Trump administration's first-year total of 2,658."

Gasoline prices have leapt to heights not seen since the 2008 global financial crisis, with the national average hitting $4.32 a gallon on Thursday, about $1 higher than before the invasion of Ukraine.

Biden last week ordered the release of 30 million barrels from the strategic petroleum reserve in an attempt to nudge prices lower.

Granholm said the country is on a "war footing," which justified the need to boost supply to lower prices even while reaffirming Washington's commitment to renewables.

"We're serious about decarbonizing while providing reliable energy that doesn't depend on foreign adversaries," she said.

But critics continue to hammer Biden's policies, including efforts to secure alternate sources to replace oil from Russia.

"This administration wants to ramp up energy imports from Iran and Venezuela: That is the world's largest state sponsor of terror and a thuggish South America dictator, respectively," Republican Senate Minority Leader Mitch McConnell said Tuesday.

"They would rather buy from these people than buy from Texas, Alaska, and Pennsylvania."

The United States is the world's largest oil producer and a net exporter thanks to the development of shale gas, but production has not yet returned to levels seen prior to the Covid-19 pandemic, which sharply curtailed demand.

However, government policies do not fully explain the hurdles to ramping up output.

Experts and industry executives caution that getting back to full speed, in particular the reopening of shale gas exploitations, cannot happen overnight.

"It just takes time," said oil market specialist Andy Lipow, noting that oil rig counts have been on the rise, climbing to 638 from 397 a year ago.

"The public wants FedEx overnight delivery. It's more like the stagecoach," he said.

Like many industries, oil companies also are facing a shortage of skilled labor.

"We are in a really dire situation," Occidental Petroleum CEO Vicki Hollub said at the CERAWeek conference, adding that supply chain challenges "makes any kind of attempt to grow now and at a rapid pace, very, very difficult."

- 'Lining their own pockets' -

Environmental groups say the crisis underscores the need to accelerate the green energy transformation. They have also denounced oil companies for raking in massive profits.

New analysis released Thursday by Friends of the Earth and BailoutWatch shows that just five "Big Oil CEOs" have sold millions of dollars worth of shares, profiting a combined total of almost $99 million in recent weeks.

"The CEOs of these companies have been caught cashing in on war," Lukas Ross, a program manager for Friends of the Earth, said in a statement.

Christopher Kuveke of BailoutWatch said the study "makes it clear that no matter how much they groan about the Biden Administration's environmental policies and geopolitics, their focus remains entirely on lining their own pockets."