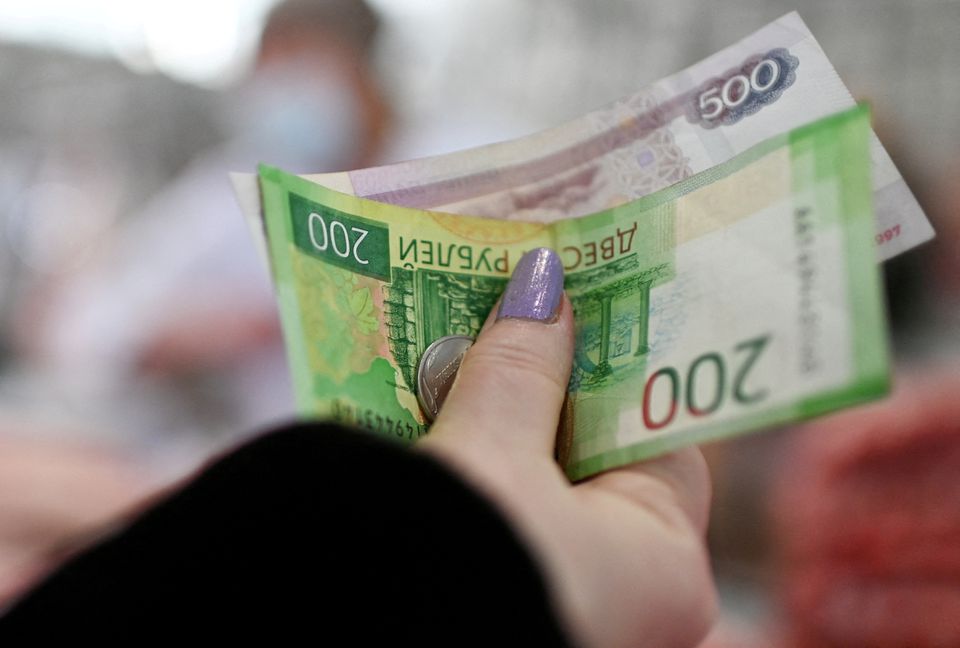 A customer hands over Russian rouble banknotes and coins to a vendor at a market in Omsk, Russia February 18, 2022. REUTERS/Alexey Malgavko

Asian shares surged on Thursday, tracking Wall Street's gains as planned diplomatic talks between Russia and Ukraine buoyed sentiment, although analysts warned the rally could be susceptible to a sharp reversal as risks remain.

Oil prices also regained some footing, having fallen more than 12% on the previous session as United Arab Emirates pledged to support hiking oil output to ease mayhem in energy markets.

MSCI's broadest index of Asia-Pacific shares outside Japan gained 1.6% in early trade. Japan's Nikkei surged 3.4% while Australian shares were up 1%.

"Comments out of Russia and Ukraine are leading to some hope that compromise is possible," said Ray Attrill, Head of FX Strategy at National Australia Bank in a note on Thursday.

Russia's foreign minister Sergei Lavrov arrived in Turkey ahead of planned talks on Thursday with his Ukrainian counterpart Dmytro Kuleba for what will be the first meeting between the two since Russia invaded Ukraine two weeks ago.

Attrill added Ukraine's accusation of Russia bombing a hospital in the city of Mariupol and fears of radiation leaks at Ukraine nuclear sites could risk further retaliation from Western nations.

European Union leaders will phase out buying Russian oil, gas and coal, a draft declaration showed on Thursday, as the bloc seeks to reduce its reliance on Russian sources of energy.

The United States banned oil and gas imports from Russia on Tuesday, while Britain said it would phase out Russian oil imports by the end of the year.

Higher energy prices will reinforce expectations that the U.S. Federal Reserve will raise interest rates by 25 basis points at its policy meeting next week to tame runaway inflation.

Data due later on Thursday is expected to show U.S. consumer inflation racing at a 7.9% annualised clip, according to a Reuters poll.

"From a central bank perspective, the war in Ukraine is likely to lead to further upward pressure on consumer price inflation that could result in a supply side shock," said David Chao, Hong Kong-based global market strategist at Invesco.

"U.S. equities could be in a holding pattern with higher levels of volatility as investors assess the impact of the Ukraine conflict on inflation and possible Fed actions."

Amazon.com Inc said on Wednesday its board approved a 20-for-1 split of the e-commerce giant's common stock and authorised a $10 billion buyback plan, sending the company's shares up 7% in extended trading.

In currency markets, the euro was trading at $1.1047 after jumping 1.6% on Wednesday, its best day since June 2016, along with gains in European stocks and a sell off in bonds, while the safe haven yen , slipped to a one-month low of 116 per dollar.