Crude Oil Jumps as much as 7% on U.S. Ban of Russian Imports, but Trades off Session Highs 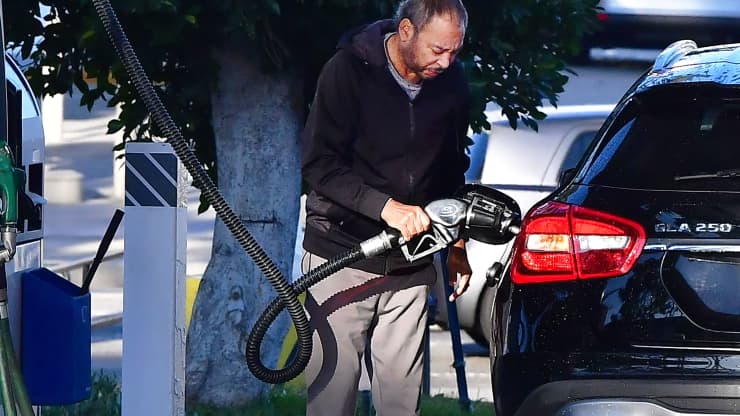 A man pumps gas into his vehicle at a petrol station in Montebello, California on February 23, 2022, as gas prices hit over $6 dollars per gallon.
Oil prices jumped to their highs of the session Tuesday as President Joe Biden announced a ban on Russian fossil imports including oil in response to the country’s invasion of Ukraine.

“We made this decision in close consultation with our allies and partners around the world, particularly in Europe,” Biden said in a press conference. “We are working closely with Europe and our partners to develop long term strategy to reduce their dependence on Russia.”

In 2021, the U.S. imported about 672,000 barrels per day of oil and refined products from Russia, or about 8% of total imports, according to Andrew Lipow, president of Lipow Oil Associates, based on data from the Energy Information Administration.

Earlier, the United Kingdom announced its own restrictions on buying Russian oil imports just before Biden spoke, saying it will phase out the country’s imports by the end of the year. The European Union also unveiled a plan to wean itself off of Russian fossil fuels.

John Kilduff, founding partner of Again Capital, said oil took a second run at $130 and failed, which induced some selling.

The market has already been self-sanctioning the Russian energy complex, with buyers avoiding the nation’s oil.

“Estimates vary, but it is probably fair to say that should an import ban be imposed on Russia the additional volume that becomes unavailable would be relatively limited,” said Tamas Varga at brokerage PVM.

“The de facto ban on Russian crude oil imports is here with or without government legislation,” Lipow added.

Prices at the pump surge

Americans are now paying the most at the pump on record as energy prices surge, contributing to rampant inflation that’s hitting all areas of the economy.

The national average for a gallon of regular gas rose to $4.173 on Tuesday, according to AAA.

Experts expect oil prices — and therefore prices at the pump — to remain elevated.

“Unless something drastic happens, we are headed for average pump prices in the $4.50-$4.75 gallon range for motor fuel and beyond $5 gal for diesel,” said Tom Kloza, head of global energy analysis at Oil Price Information Services.

Russia is a key oil and gas producer and exporter, and the country’s war on Ukraine is disrupting the global market.

“Given Russia’s key role in global energy supply, the global economy could soon be faced with one of the largest energy supply shocks ever,” Goldman Sachs said Monday in a note to clients.