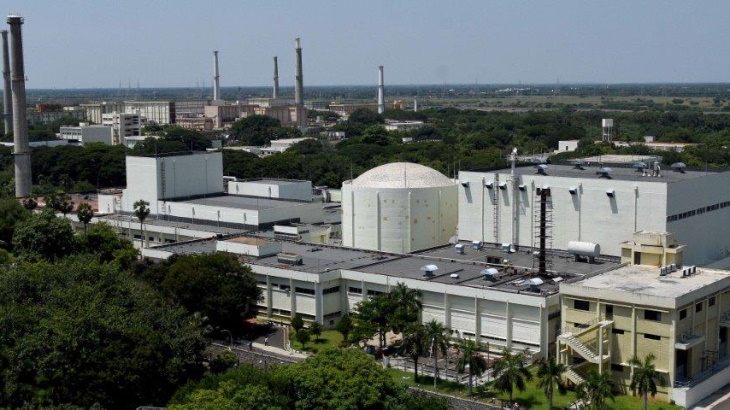 FBTR (Image: IGCAR)
FBTR is one of two civil research reactors at the Indira Gandhi Centre for Atomic Research (IGCAR) at Kalpakkam. Based on the French Rapsodie-type reactor, the sodium-cooled unit first started up at 10.5 MWt in 1985, and according to the IGCAR was the first in the world to use mixed plutonium uranium carbide as a driver fuel. In 2005, the fuel cycle for the FBTR was closed, with the reprocessing of 100 GWd/t fuel - claimed as a world first. The power was gradually increased, but limited to a maximum of 32 MWt which it reached in 2018.

In 2011 it was announced that FBTR was to undergo a 20-year lifetime extension, to 2030, to carry out large-scale irradiation of the advanced metallic fuels and core structural materials required for the next generation fast reactors.

The reactor has now been able to reach its design power level following the installation of a newly designed core containing "few" poison subassemblies, IGCAR said. (Neutron poisons are materials that have a large capacity for absorbing neutrons.) "After getting AERB (Atomic Energy Regulatory Board) clearance, FBTR was converted to new 40 MWt core and all the reactor physics parameters were measured to ensure safety. Reactor was re-started with new core and power was raised to 40 MWt," IGCAR said yesterday.

Work on a 500 MWe prototype fast breeder reactor - the PFBR - began at Kalpakkam in 2004. That unit is currently pencilled in for completion in October this year.