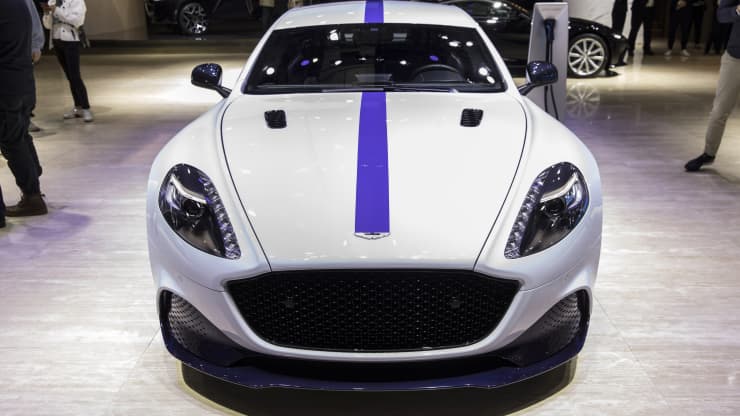 Aston Martin is to work with Britishvolt on the development of “high performance battery cell technology,” as the carmaker gears up to launch a battery-electric vehicle in 2025. The two firms have signed a memorandum of understanding relating to the plans.

In an announcement Monday, the companies said a joint R&D team would “design, develop, and industrialise battery packs, including bespoke modules and a battery management system.”

Known for its gasoline-fueled luxury vehicles, Aston Martin is attempting to broaden its offering to customers by catering to the burgeoning electric vehicle market.

According to the business, all of its new product lines will offer the option of an electrified powertrain by the year 2026. Deliveries of a plug-in hybrid, the Valhalla, will start in 2024 and it wants its “core portfolio to be fully electrified by 2030.”

While Aston Martin is focusing on EVs, the internal combustion engine remains important to the business and it recently launched a new, nonelectric SUV, called the DBX707.

“It will be, and is, the greatest ultra-luxury, high-performance SUV in the world,” Aston Martin Executive Chairman Lawrence Stroll told CNBC in an interview.

Britishvolt is building a gigafactory in the county of Northumberland, northeast England. The company has received backing from the U.K. government and Glencore, among others.

So-called gigafactories are facilities that produce batteries for electric vehicles on a large scale. Tesla CEO Elon Musk has been widely credited as coining the term.

Britishvolt says its plant will have the capacity to produce more than 300,000 EV battery packs each year. It’s hoped the first phase of the gigafactory will begin production in the fourth quarter of 2023 or the start of 2024.

In a statement Monday, Aston Martin Lagonda CEO Tobias Moers said the partnership with Britishvolt provided “Aston Martin with additional access to technology and skills to broaden our electrification options.”

Aston Martin is one of several companies attempting to develop and secure a supply of batteries for electric vehicles. In January, for example, Lotus signed an MoU with Britishvolt centered around “next generation battery cells.”

Elsewhere, in February Volvo Cars and Northvolt said they would build a battery manufacturing plant in Gothenburg, Sweden, with construction set to begin in 2023.

The companies said the development was set to “have a potential annual cell production capacity of up to 50 gigawatt hours.” This would equate to supplying enough batteries for around 500,000 cars every year, they said.

According to the European Automobile Manufacturers’ Association, 878,432 new battery-electric passenger cars were registered in the EU last year, compared to 538,734 in 2020. For new passenger cars, the market share for battery electric vehicles stood at 9.1% in 2021.

Despite registrations for new gasoline and diesel vehicles falling, electric vehicles have some way to go before they account for the bulk of registrations. The ACEA said, “conventional fuel types still dominated EU car sales in terms of market share in 2021, accounting for 59.6% of all new registrations.”