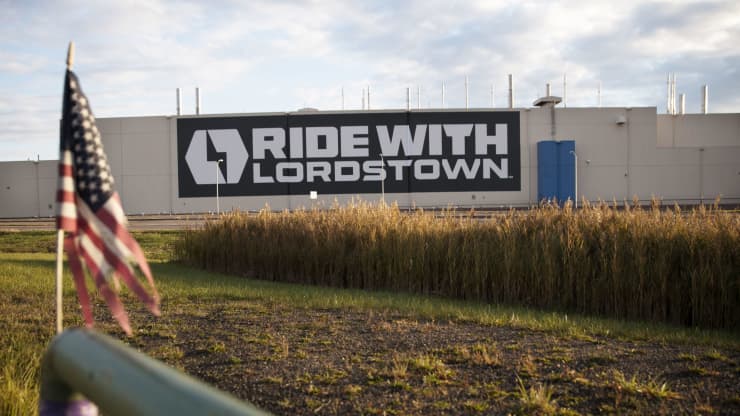 The Lordstown Motors factory is where GM once operated, in Lordstown, Ohio, on October 16, 2020. Megan Jelinger | AFP | Getty Images

GM owned 7.5 million shares of common stock in Lordstown as part of a SPAC deal that took the Ohio-based automaker public in October 2020. The shares had an initial equity value of $75 million. They were given in exchange for in-kind contributions and $25 million in cash GM’s stake was less than 5%.

The disclosure comes after Lordstown on Monday announced underwhelming plans to produce and sell up to only 3,000 vehicles through next year, including 500 in 2022. Both are far below the amount former management sold investors on in the runup to the public listing.

The share sale was somewhat expected. GM’s involvement in the company was a goodwill gesture to assist in getting the Lordstown Assembly plant back up and running following the automaker ending production there in 2019.

“Our objective in investing was to allow them to complete the purchase of the plant and restart production,” Cain said.

Lordstown recently started producing preproduction models of its first vehicle, an all-electric pickup truck called the Endurance, at the plant. It plans to begin customer deliveries during the third quarter of this year.

In the fourth quarter, Lordstown announced a deal with iPhone maker Foxconn to purchase the plant for $230 million. The deal includes Foxconn, which is formally known as Hon Hai Technology Group, handling production of the Endurance pickup truck.

The deal is still being finalized, Lordstown executives said Monday. They’re also in negotiations for the two companies to co-develop vehicles in the future. Lordstown CEO Dan Ninivaggi characterized the deal as a critical component to the company’s future success.