Offshore wind farms are proliferating around the world in pursuit of the shift to clean energy. Viewed almost as perpetual motion machines, virtually every country with a coastline is planning to install the giant turbines that will capture the wind and convert it to electrical energy for powering homes and businesses onshore. 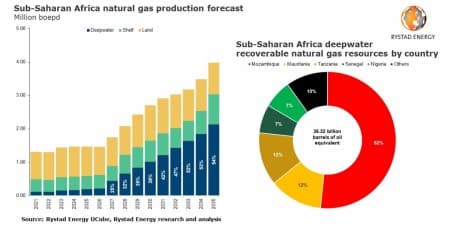 Analyst firm, Rystad notes that “the combined capital and operational expenditure for the decade is set to add up to an eye-popping $810 billion, signaling an increasing shift of investments from oil and gas to renewable energy technologies. We expect the world’s installed capacity to hit an estimated 109 GW by 2025 and rise further to 251 GW by 2030, growing by 22% a year on average.”

These projections are broad-brush estimates based on governmental energy use factors around the world and the increasing desire to shift this load to renewables. Countries are promoting the development of these installations, primarily through tax subsidies that can refund a large portion of the front-end cost of these capital-intensive projects. This is in support of energy policy changes adopted to implement the Paris Climate Agreement.

In the U.S., wind farm developers had access to federal wind production tax credits, but this program has expired. It was expected to be continued through the Build Back Better presidential initiative, but this too has met with opposition and is currently in limbo. There are other U.S. Wind Energy governmental programs still in place that can fill at least some of the gap for prospective wind developers. In Europe, the European Union has promulgated its own set of funding schemes that prioritize the development of clean energy sources.

If these “incentives” weren’t enough to propel clean energy investments, global financial markets have also applied the “cudgel.” Massive investment houses like Blackrock and Proshares have promulgated so-called ESG funds that invest only in clean energy sources, intending to force the transition away from fossil fuels by starving producers of capital.

In this article, we will take a high-level survey of companies that would appear to be poised to thrive in this supportive regulatory environment. These companies, large multi-national engineering and construction behemoths, are at the vanguard of deploying wind farm technology. One would expect them to be prospering against the backdrop of taxpayer funding globally, and steadfast adherence to the Paris climate goals. We will also review a clean energy Exchange Traded Fund (ETF), to see if there are larger implications for the sector that go beyond what we might learn from individual companies.

We have established that there is a very supportive base - governmental, financial, and social - for wind farms. One company, Orsted, a major Danish-based provider of wind farms and other forms of clean energy, booked over $11.8 billion of revenue in 2021, this was a 30% increase over 2020. With results like that you would expect them to be flush with cash, and sporting a resilient and rising stock price. You would be wrong, at least as regards the stock price.

Over the past year Orsted with a stock price in the low $30’s, is down 37.5% from prior levels. Their balance sheet and earnings statement are fairly solid, with ~$1.5 bn of cash on the books, and debt less than $5 bn, so we have to look elsewhere for the source of this decline. There are several key drivers that appear to be impacting their performance.

“During the quarter, we saw wind speeds roughly in line with the norm for the quarter, while the derived effect from the energy crunch had a negative impact of DKK 1 billion on our offshore sites earnings.”

There’s really nothing new in that revelation, we’ve been hearing about this issue for half a year now. What other factors could be pulling Orsted’s stock price down?

One of the things that have been slow-rolling through the wind farm business is the supply chain woes that first really came to light last year. It’s something the wind farm industry has been dealing with for even longer, dating back to 2020. As an article carried in Upstream Online notes, it’s beginning to claim victims. Earlier this month a Malaysian wind farm contractor Sapura Energy defaulted on a $3 bn contract to build a 640 MWH offshore farm at Yunlin in the Taiwan Strait.

The article went on to comment on wider implications for the industry as a whole.

“The cancellation of the most recent offshore windfarm contract echoes a wider trend in the industry, where some oil and gas offshore contractors are finding it increasingly difficult to transition to the greener side. Italy’s Saipem recently told investors to brace for a big loss for 2021 as onshore projects and offshore wind projects were hit by costs and delays, without naming the specific projects. Saipem said that the yearly loss for 2021 could be worth more than one-third of the company's equity.”

This trend is exacerbated by another problem besetting the wind industry. Low margins tied to a fixed, predetermined power price, that doesn’t take into account variable costs of production. This was noted in the recent General Electric investor letter.

There GE noted that the wind business is seeing cost inflation and project delays driving negative margin. They further commented they were hearing much the same from other clean energy equipment providers, such as Siemens Gamesa (OTCPK:GCTAF) which reported last week; “the downstream operators of these projects often bid them to a fixed power price, with very low margins and low returns, leaving little margin for cost inflation or delays.” The company further noted that there did not seem to be a quick fix for these problems.

“The magnitude of these challenges likely present pressure to overall growth, profit and FCF through the first quarter and the first half, beyond typically expected seasonality.”

GE stock has mostly tread water in the low $90’s to the $110 level since its 1:8 reverse split a couple of years ago.

To ensure that I wasn’t being misled by too narrow a focus on a few companies, I looked at the results of a couple of large clean energy ETF’s. These funds spread risk across a wide swath of sector industry players. What I found was there are a couple of big ones. Both of which had seen significant declines over the past few months.

GlobalX ETF Wind Energy, (NYSE:WNDY) and First Trust Global Wind Energy, (NYSE:FAN), were two that popped up on a quick search. Both have similar slopes, only natural since they invest in many of the same companies (Orsted, Vestas, etc.), so I’ll present only one. WNDY is down 25% in the last since months and trends toward further weakness.

From this high-level investigation, there appear to be some obvious cracks in the industries that will be tasked with building the plethora of wind farms planned for the next few years. Whether it is slow wind speeds, supply chain woes, or low installed price limits that keep costs from being passed on to project managers, the result is the industry is not prospering at present. Investors who bought into these companies are down 20-25% on their capital in just six months.

There is also trouble brewing in terms of acceptance of these structures, by the very people they are intended to serve. An article carried in Forbes last September discussed the groundswell of pushback and ‘NIMBY-ism’ that wind energy projects were beginning to face. The article notes that big wind projects have become so unpopular that state lawmakers, at the behest of the Wind Lobby, have pushed through regulations that allow them to override local objections.

In summary, while the support for offshore wind projects appears steadfast at the governmental levels around the world, there are questions now being asked about the ability of the industry to deliver this clean energy future. There are also questions arising as to whether the people they are intended to serve, will actually tolerate their presence.

It’s too soon to say if these problems will be worked out, and industry valuations begin to rise again, or possibly experience further declines. Investors considering taking a position in any of these securities should definitely do some legwork on the viability of the investing thesis before plunging ahead.