24 Feb 2022  by hydroreview.com
Based on data released by the National Oceanic and Atmospheric Administration’s Northwest River Forecast Center (NWRFC), the U.S. Energy Information Administration (EIA) said that with “mixed water supply conditions” in the Pacific Northwest, hydroelectric production should rise in 2022. 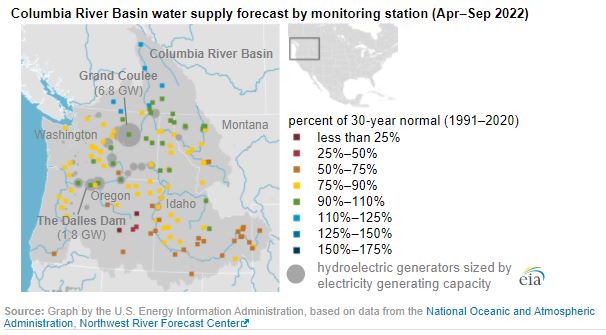 NWRFC’s outlook contributes to EIA’s Short-Term Energy Outlook (STEO), which earlier in February forecast 17% more electricity generation from hydropower in the Pacific Northwest in 2022 compared with 2021.

The Columbia River Basin contains more than one-third of U.S. hydropower capacity and generates enough electricity to power over 4 million homes. As such, changes in water supply can affect the use of other electricity-generating fuels in the region, such as natural gas, and can affect electricity trade with neighboring areas.

Seasonal precipitation and snowpack are the two main factors that help predict water supply. The 2022 water year followed a historic drought in the western U.S. that included record-breaking heat waves, and drought emergencies across Washington, Oregon and Idaho. EIA estimated that hydropower generation in 2021 fell by 10% in the Northwest and by 9% in the entire U.S. compared with 2020.

More precipitation between October 2021 and January 2022 has led to near-normal snowpack accumulation across the northern part of the basin. However, snowpack in the southern part of the basin remains below normal due to less precipitation in the area. Significant precipitation and increased snowpack accumulation could occur through April, which would change the water supply outlook and EIA’s hydroelectric generation forecast. April is normally when snowpack starts to melt, leading to spring runoff and peak hydropower generation in May and June.

In its February STEO, EIA forecast that U.S. hydropower plants would generate 278 million MWh of electricity in 2022, half of which would come from the Northwest. This would be an 8% increase in U.S. hydroelectric generation from 2021. Overall, EIA said it expected hydroelectricity to account for 7% of total U.S. electricity generation in 2022.