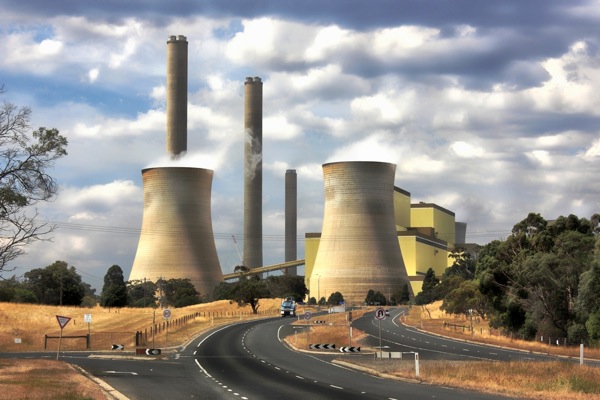 AGL’s Loy Yang power station (Image by kezza |Shutterstock.com)
(The opinions expressed here are those of the author, Clyde Russell, a columnist for Reuters.)

The bid by a green billionaire to buy Australia’s most polluting company may have stumbled at the first hurdle, but it’s likely the race is far from over.

Cannon-Brookes, Australia’s second-richest person and a co-founder of software business Atlassian Corp, joined with the private equity venture to offer A$7.50 a share for AGL, a small 4.7% premium to the closing price on Feb. 18, in a deal that valued the utility at around $3.54 billion.

The motivation for the takeover bid was to accelerate AGL’s closure of its coal-fired generators and drive investment in renewable energy replacements.

In effect, Cannon-Brookes and Brookfield are proposing to drive a faster transition away from coal than AGL is planning, circumventing Australia’s lack of policy around ending the use of fossil fuels.

They want to close AGL’s remaining coal-fired generators, which account for about 8% of Australia’s carbon emissions, by 2030, instead of 2045 under AGL’s current plans.

AGL’s board rejected the offer, saying the premium being offered for control was too small.

They may well have a point, certainly a higher offer may have made it harder for the board to outright reject the proposal.

But AGL also said it’s own plan to split its business into two companies, a renewable energy generator and retailer, and a generation business housing its legacy coal-fired plants.

The problem with this proposal, due to being voted on by shareholders in June, is that while the renewable and retail business may be attractive to investors, the generation business is likely to be a pariah.

Very few institutional investors will want any part of it, and it’s also likely that banks will be reluctant to finance it.

This means that the business, which AGL intends to call Accel Energy, is likely to struggle to find the capital needed to maintain, operate and insure increasingly aging and expensive coal-fired units.

Overall, AGL’s future would likely be better secured by Cannon-Brookes and Brookfield’s plans, which involve investing as much as A$20 billion ($14.4 billion) in renewable generation and storage solutions, which they plan to bring online prior to closing any coal-fired generators.

Cannon-Brookes and Brookfield have signaled they aren’t quite ready to walk away from buying out AGL, so the story likely still has a few twists and turns.

But their proposed buyout of AGL has wider implications, namely that there is now plenty of capital available to accelerate decarbonization, and conversely very little available to keep fossil fuel generation going.

The bid also shows that private investors are now prepared to step in where governments or companies fail to lead.

Australia’s ruling conservative Liberal-National coalition has long favoured fossil fuels, and even touted a “gas-fired recovery” from the coronavirus pandemic, which has so far amounted to backing a new natural gas-fired generator that market experts say isn’t needed and will only run for very short periods as a peaking plant.

Prime Minister Scott Morrison said he wants AGL’s coal units to stay online to the end of their scheduled lives, suggesting that energy prices would rise if this wasn’t the case.

This appears to be an illogical argument, given the decrease in Australia’s electricity prices has been driven by the massive investment in cheap renewables, mainly household and utility-scale solar.

Coal-fired units can no longer compete at certain times on a price basis against renewables, and Australia’s ageing fleet is increasingly prone to breakdowns.

While a billionaire battling a fossil-fuel giant makes for good headlines, it’s also worth noting that there are quieter efforts underway in Asia to effectively buy coal power plants and retire them early.

The Asian Development Bank has launched what it calls the Energy Transition Mechanism, which aims to bring green capital together with coal-fired generators, aiming to work to closing plants and building renewable alternatives.

The proposals aim to be collaborative and the ambition is to drive decarbonisation in countries such as the Philippines, Indonesia and Vietnam.

Both the quiet path and the noisy route chosen by Cannon-Brookes have the potential to re-shape power generation in Asia.