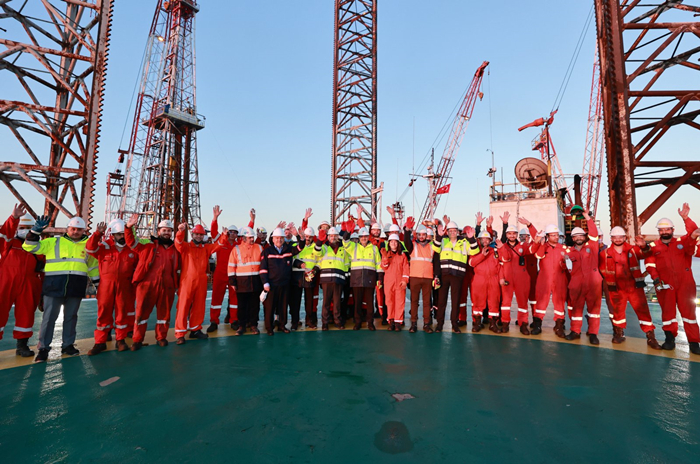 Dönmez also visited the drilling platform located off the coast of Silivri to examine the works being carried out to increase the natural gas storage capacity of the facility.

Noting that the natural gas stored in the summer is returned to the system through these facilities, especially during the winter days when the demand is high, Dönmez explained that this way the supply-demand balance is ensured.

Dönmez said: "We will initially increase the storage capacity from 2.8 bcm to 4.6 bcm with these works. We also have ongoing work at the Lake Tuz Underground Natural Gas Storage Facility. We currently have a storage capacity of 1.2 bcm there. That will increase to 5.4 bcm in 2023. The capacity of the two storage facilities will reach 10 bcm in total, and we will store approximately 20% of the gas we consume in the country in these facilities."

Noting that high-tech work is being carried out within the scope of these projects, the minister said, the Silivri facility alone employs 115 employees.

"We also have 115 employees on the other platform. The drilling techniques used here are conducted in line with the latest technology. We are developing the reservoir area and storage area by descending approximately 2,000 meters (6,562 feet) below the ground," he said.

"We will complete the Silivri Underground Natural Gas Storage Expansion Project this year," he noted.

Dönmez also emphasized that the daily regeneration capacity of the facility will be increased, too.

"Currently, there is a regeneration capacity of 28 million cubic meters (mcm). We will increase this to 75 mcm. With the ongoing work at the Lake Tuz facility, 40 mcm of regeneration will become 80 mcm," he explained.

Pointing out that the number of liquefied natural gas (LNG) terminals have increased as well as the storage facilities in question, Dönmez said: "Two new FSRU (floating LNG storage and regasification units) have been installed and connected to the system. We are about to come to an end at the Saros Terminal, which is under construction. We will launch it this year."

Dönmez stated that all measures of this year and the next year have been taken to increase natural gas capacity. "We are increasing our capacities. We will see that these projects are completed as soon as possible," he added.

Turkey supports its energy supply security through its LNG and FSRU terminal infrastructure, which meets nearly 45-50 bcm of its annual consumption.

The country plans to expand its LNG storage capacity by adding another FSRU in Saros Bay, north of the Gallipoli Peninsula in northwestern Turkey by the end of the first half of 2022.

It is slated to add significant flexibility to the country's energy supply chain security with its 110 mcm of storage and 28 mcm of gasification capacity.