21 Feb 2022  by www.wind-watch.org
A wind turbine near Hesket Newmarket in Cumbria has been torn apart by Storm Dudley, becoming the second to fall prey to the winds this week. 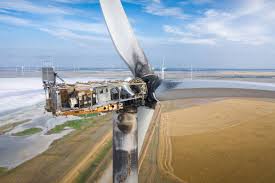 Whereas the first victim was a 115m tall Welsh turbine that was bent clean in half by Dudley, the Cumbrian turbine had its rotor blades snapped off and rotor hub destroyed by the 112km/h winds that descended on the region around 2am on Thursday morning. It also caused loss of power to 200 homes in the area.

Videos shared by BBC and ITV (seen below) seem to show the turbine as being on its own, rather than part of a farm – perhaps privately owned.

Storm Eunice is now sweeping across the UK, with winds up to 160km/h expected.

This is causing chaos for trains as trees are collapsing on lines around the country and disrupting services. Major infrastructure, particularly road bridges like the Dartford Crossing, are being closed in anticipation of hazardous driving conditions and flying debris.

The southwest of England and the south of Wales has been put on red weather warning.