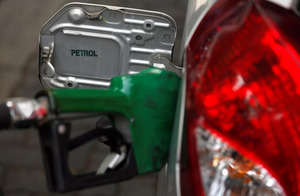 A nozzle pumps petrol into a vehicle at a fuel station in Mumbai.
Soaring gasoline prices are fanning inflation and causing a headache for governments and central banks worldwide. In countries with elections coming up, they’re an extra headwind for the incumbents.
While the U.S. mid-terms in November are the prime example of fuel prices feeding into the political sphere, upcoming votes in Asia may also be affected. Voting is already underway in Indian state elections and South Korea holds a presidential poll in early March. There’s also an Australian general election and a contest for the upper house in Japan in the next few months.
Oil’s relentless march toward triple figures has already prompted political action from incumbents. India cut retail taxes on gasoline and diesel in November and there’s been an unofficial freeze on prices since. South Korea enforced a temporary 20% drop in fuel levies in October through April, which may be extended, while Japan is subsidizing refiners to make motor fuel.
Governments in economies where wage levels are lagging behind inflation are most vulnerable to a gasoline-induced political backlash, according to Sonal Varma, chief economist for India and Asia ex-Japan at Nomura Holdings Inc. 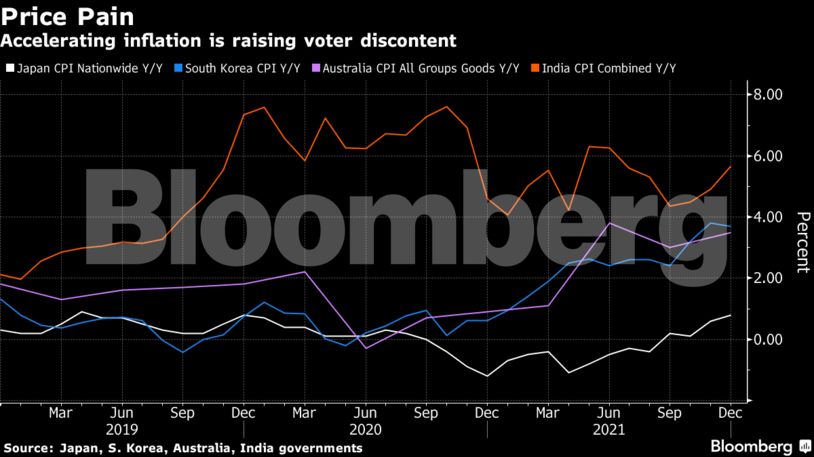 “If a country has low-income growth and high inflation, then it becomes a double-whammy, and then it could have both economic and political repercussions,” she said. It’s especially a concern in Asia, given that all of the major economies in the region are net oil importers, Varma said.
Australian retail gasoline have risen by 80% since early May 2020, while in Japan they’re up 37%, as oil recovered from the depths of the pandemic. In India, there are expectations the big state-owned fuel retailers will hike prices sharply following the elections that end next month.
Voters there are going to the polls in elections that run through early March in five states, most notably Uttar Pradesh, the largest state with more than 200 million people. Inflation, which breached the central bank’s 6% tolerance limit in January, points to a tough challenge for Prime Minister Narendra Modi’s Bharatiya Janata Party. Rural wages haven’t kept pace, rising only 3.31% in December from a year earlier, Bloomberg Economics data show.
South Korea elects a new president on March 9. Incumbent Moon Jae-In isn’t allowed to run for another term, and polls are indicating a tight race between candidates from his party and the opposition. Average wages rose 4% last year, while year-on-year inflation was 3.6% in January, so price gains may not play as big role in the vote as elsewhere. 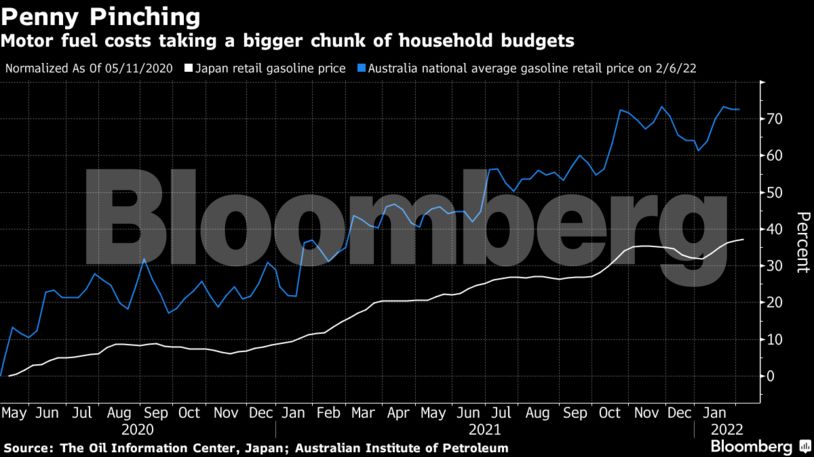 Australian Prime Minister Scott Morrison must call a general election before the end of May and polls show he could be facing a landslide loss. Consumer sentiment has taken a hit as households struggle with soaring gasoline prices, with the Reserve Bank of Australia forecasting core inflation will rise above 3%. Average wage levels climbed 2.2% in the third quarter of 2021 from a year earlier, according data from the statistics bureau.
In Japan, more than half the seats in the Upper House are up for grabs in a vote in July, which could affect Prime Minister Fumio Kishida’s chances of staying in office. Inflation expectations among households are at the highest since 2008, while average monthly cash earnings actually dipped slightly in December from a year earlier. Kishida said Thursday that more policies to ease the effect of high oil prices on households were being discussed.
The growing political focus on trying to lower oil prices represents a shift away from commitments made at the COP26 meeting late last year to accelerate efforts to phase out fossil fuel consumption. The higher oil prices are swelling the coffers — and influence — of Saudi Arabia and Russia, and reinvigorating an industry that had been moving toward cleaner sources of energy.
“High fuel prices have been a persistent problem in the global inflationary environment since 2021,” said Vandana Hari, founder of Vanda Insights, an oil market analysis provider in Singapore “Of all categories of consumer goods, fuel prices are an especially politically sensitive issue.”