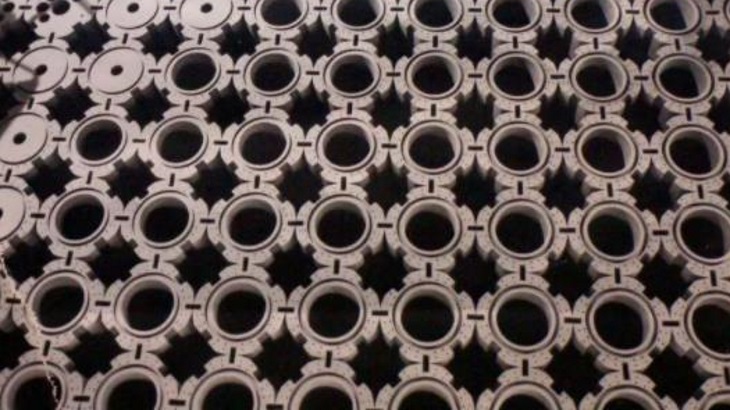 The graphite core of an AGR reactor (Image: EDF Energy)
The UK uses the term Advanced Modular Reactor (AMR) for the next generation of nuclear reactors. In December the government announced that the technology focus for the programme would be High Temperature Gas Reactors (HTGR).

The HTGR is seen as a good fit for the UK, which founded its nuclear power sector with two generations of domestically designed gas-cooled reactors: the 26 Magnox reactors deployed in the 1960s and 1970s and the 14 Advanced Gas-cooled Reactors (AGRs) deployed in the 1970s and 1980s.

According to the overview published by the Department for Business, Energy and Industrial Strategy (BEIS): “The aim of the Programme is to demonstrate that HTGRs can produce high temperature heat which could be used for low-carbon hydrogen production, process heat for industrial and domestic use and cost-competitive electricity generation, in time for any potential commercial AMRs to support Net Zero by 2050.

"Certain HTGR designs have been demonstrated which highlight the early stages of technology feasibility. BEIS would like the sector to demonstrate a HTGR, to be sited in the UK, which has innovation at the centre of its design, build and application – with the ambition for this to result in the most cost-effective solution shaped by end-user requirements and delivered by the early 2030s."

The department is now looking for feedback from the industry and wider stakeholders on the proposed structure and timescale of the programme. The intention is launch a formal Invitation to Tender for the first phase of the programme by the end of June.