What the Ukraine Conflict Means for Europe’s Energy Crisis

17 Feb 2022  by power-technology.com
If Russia invades Ukraine, Europe will find itself in direct conflict with its biggest energy supplier. 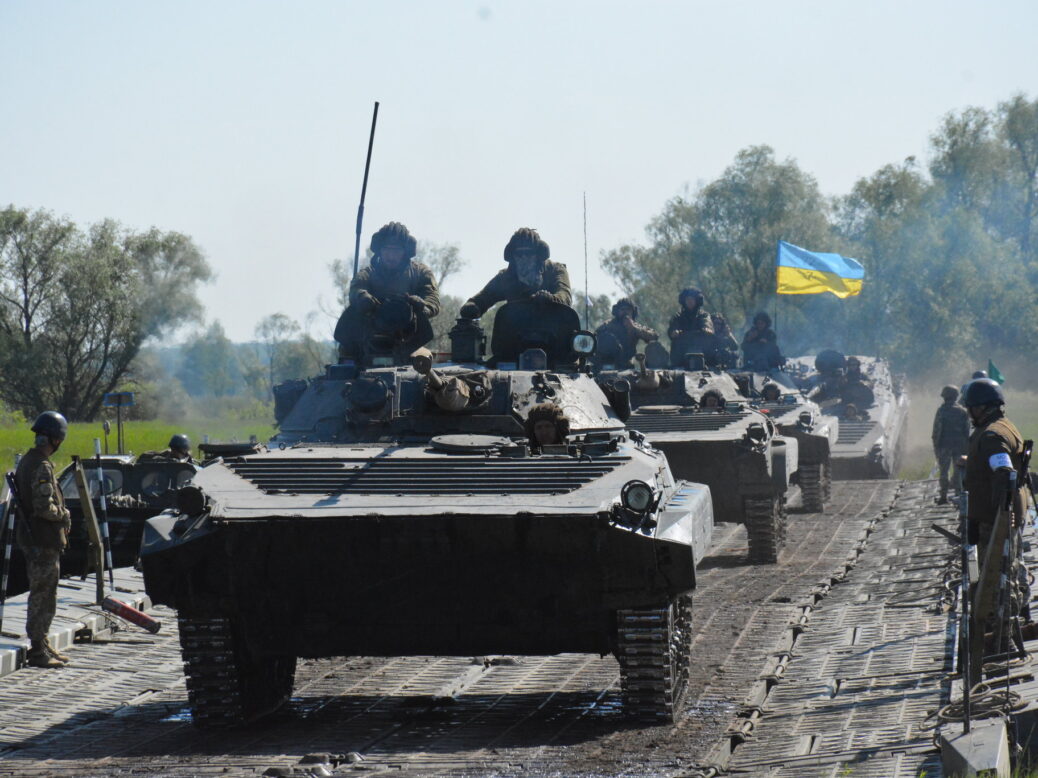 The Ukrainian military on exercises in 2018. Credit: Ukrainian Ministry of Defence.

Around 100,000 Russian troops – backed by tanks, artillery, and air power – are currently entrenched on Ukraine’s border, poised to strike at a moment’s notice. US President Joe Biden has described the possibility of an invasion in February as a “distinct possibility”, while Russia says it sees “little ground for optimism”. The situation is as fragile as they come.

As well as peace in eastern Europe, another issue in the crosshairs is Europe’s energy security. The deepening tensions with the region’s largest gas supplier have stoked fears that the Kremlin may restrict energy exports to Europe in the face of potential sanctions. 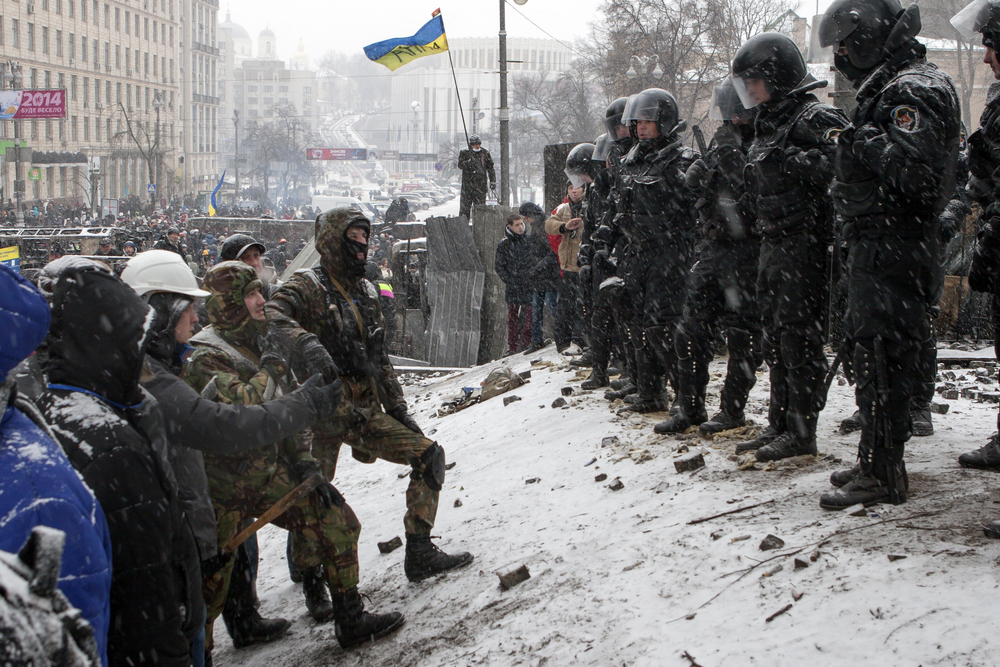 A protest against the Yanukovych regime in Kiev, Ukraine, in 2014. Credit: Lena Osokina via Shutterstock.

Europe already finds itself in the throes of an energy crisis. Gas has reached record prices in recent months and Goldman Sachs cautioned at the end of January 2022 that “high energy prices […] are not necessarily a one-off”, with prices likely to stay twice as high as normal until 2025, and blackouts expected if the region experiences especially cold temperatures in February and March.

S&P Global has warned that “any conflict impacting gas supplies into Europe could have knock-on impacts on power, carbon and coal prices”.

Russian invasion “no longer if but when”

“Ukraine will likely suffer Russian military operations in the coming days or weeks. The question now is no longer if but when, and how far it will go,” wrote Mathieu Boulègue, a research fellow at Chatham House’s Russia and Eurasia Programme, in a recent editorial.

After an invasion, Boulègue predicts that once Kyiv can no longer take the cost of warfare, Russia would move to “diplomacy”, where it could potentially force a regime change, install a pro-Kremlin team and block the country from joining Nato. “There would probably be no Russian withdrawal until after the Minsk agreements [international agreements to restore peace in Ukraine after the 2014 Crimean conflict] have been fully implemented to Russia’s satisfaction,” he says.

What could conceivably follow is a partition of Ukraine, with the creation of a “Union State” as part of an enlarged Russia. Russia could push for more strategic concessions regarding European security and Nato’s role. “The Kremlin has now raised the stakes so high it seems improbable it will simply back down unless it can gain something in return,” says Boulègue.

Ukraine used to be a key terminal in the European energy system, but that is less the case today. In the 1990s, most of the gas Russia exported to Europe crossed Ukraine. However, Russia has since diversified routes via the Yamal-Europe pipeline through Belarus and Poland, the Blue Stream and TurkStream pipelines to Turkey, and the Nord Stream 1 pipeline to Germany (with Nord Stream 2 awaiting certification). That reduced gas transit via Ukraine by 70% between 1998 and 2021.

The new pipelines have reduced the number of countries dependent on supplies via Ukraine. Today, Ukraine is primarily a transit corridor for gas going to Slovakia, and onwards to Austria and Italy. ENTSOG, the organisation that coordinates Europe’s national gas transmission system operators, concludes in a recent analysis that the downstream impacts of a cut-off in Ukrainian supplies could be managed, assuming a well-functioning market and regional collaboration.

“A physical interruption of gas flows through Ukraine would impact Slovakia, Austria, and Italy, each of which has different options to cope," wrote Nikos Tsafos, the James R. Schlesinger chair in Energy and Geopolitics at the Center for Strategic and International Studies in the US in a recent editorial. “Italy, given its access to the sea, has the most alternatives. A cut would also hit Poland, which has more alternative options than ever. Moldova would be in a harder position, although its imports come through a different artery; whether gas is cut off would depend on the type and duration of the conflict. Whether these countries can access alternatives will hinge on global market conditions and the amount of gas in storage around the continent.”

Ukraine’s own energy security still hinges on its role as a transit country, adds Tsafos. Ensuring adequate supplies in the country without such transit will be considerably more difficult, but otherwise, the downstream impacts on European supplies would be “far more localised and narrow”, he concludes.

There are, however, a number of variables at play. “A conflict in January is not the same as a conflict in April, after winter is over. A week-long skirmish is different than a multi-month stalemate. Localised fighting might not impact gas flows, whereas all-out war might. Gas infrastructure could be targeted by accident or by intent to gain a military advantage. The damage to infrastructure can be minor or major. These parameters are unknowable at this time,” writes Tsafos.

One scenario: gas flows are disrupted because Ukrainian infrastructure is damaged or restricted. However, another, more serious one is that gas is used as leverage, with Russia cutting off supplies to pressure Ukraine or Europe.

Gas as a weapon

Russia could cut off other oil and gas supply routes into Europe. “History tells us that energy is a lousy weapon to achieve political goals, but it could still be wielded,” writes Tsafos. In fact, many, including the International Energy Agency, would argue that Russia is weaponising gas already, holding back supplies despite record prices in Europe. “There is no doubt that Russia has been uniquely unhelpful in addressing the panic that has engulfed the market,” adds Tsafos.

Withholding further supplies would come at a huge cost to the Russian economy. However, its economic dependence on oil and gas sales into Europe is less than it was during the Cold War, as there now exists a global market for oil and an alternative gas market in north-east Asia. “So, it is not quite the relationship of mutual dependency that the EU has wanted it to appear to be,” says John Lough, associate fellow in Chatham House’s Russia and Eurasia programme, and author of Germany’s Russia Problem.

For Russia, it is a delicate trade-off between the economic incentive of keeping energy supplies flowing and the security incentive of making sure Ukraine never joins NATO. “They see themselves in quite a favourable position in that Europe is trying to take strides to move away from fossil fuels, but in the meantime gas is the bridging fuel, and the Germans epitomise this: they have made themselves, in my view, unnecessarily dependent on Russian gas,” says Lough.

The possibility of sanctions against Russia

In response to any supply disruption from Russia, the West could introduce a variety of sanctions against its energy sector, including making it illegal for countries and companies to buy oil and gas from energy giants Rosneft and Gazprom. The EU and the US are also reportedly preparing to sanction Russian gas in the event of an invasion by severely curtailing financing and technology transfer for new projects – seen as a way of striking the country’s main industry while avoiding short-term pain to Western energy markets. Nonetheless, any curbs on Russian gas would likely further raise prices across Europe.

At the moment, European countries are not seriously considering halting energy deliveries from Russia, according to Lough. “It is an issue that is starting to be discussed in some places, and sanctions against Russia there would be extremely effective because in a stroke they would wipe out around 50% of Russia’s foreign currency earnings – but I don’t think there is any likelihood that is going to happen,” he says.

One of the measures the West could take would be to stymie the Nord Stream 2 gas pipeline from Russia to Germany. The 1,225km pipeline, which runs under the Baltic Sea, is designed to double Russian gas exports to Germany, and took five years and $11bn to build. However, it is not yet in operation, as regulators said in November 2021 that it does not comply with German law and suspended its approval. On 27 January 2022, both US and German officials said that the project would face sanctions in case of a conflict. “I want to be very clear: if Russia invades Ukraine one way or another, Nord Stream 2 will not move forward,” US State Department spokesman Ned Price told NPR.

However, despite the rhetoric in Washington, Germany cannot simply cancel Nord Stream 2, as the pipeline is already built. The country also has reason to open it, because phasing out nuclear power and coal in parallel makes it more dependent on gas. “The country has been burning an extraordinary amount of coal recently, which they are obviously trying to cut down on, so they need gas – so where are they going to get it from?” asks Lough. “But I think if the Russians were to intervene in a serious way in Ukraine, then Nord Stream 2 would not be certified, and that may be something that ultimately makes the Russians think twice about the consequences of their actions.”

Europe depends on Russia for around 40% of its gas and 25% of its oil imports, and any disruption would exacerbate the current energy crisis. Economic think tank Bruegel agrees with ENTSOG that the EU could cope with a short-term halt to Russian gas imports, but doing so would have “profound economic consequences” and require additional LNG imports and emergency measures to restrict industrial demand, such as factory closures.

“However, getting through half a winter without Russian imports but with some gas in storage is one thing – running the European economy for several years without Russian gas is a different challenge,” says Simone Tagliapietra, a senior fellow at Bruegel. "While there is more time to prepare, there are also much higher volumes to displace.”

In recent years Europe has increased imports of LNG from the US, Qatar, and other countries. In 2020, EU gas imports fell by 9% and the region’s reliance on Russia decreased slightly. Nevertheless, the country remained the EU’s top supplier, accounting for 43% of imported gas, followed by Norway and Algeria.

According to Bruegel, spare infrastructure capacity could add 17TWh of weekly pipeline imports from Norway, North Africa and Azerbaijan as well as additional LNG volumes – almost substituting the supply from Russia in recent weeks. “But getting the molecules at the scale required to entirely replace Russian volumes is at best very expensive, or not possible,” says Tagliapietra. In the case of an extreme winter and no Russian gas from February, the EU’s gas stores could be empty by the end of March.

Europe has fortified its defences since the energy crises of 2006 and 2009, investing billions in infrastructure that allows it to import gas by ship and more easily move the fuel across the continent. However, the fact is that the continent remains dependent on Russian gas. The current conflict strengthens the case for policymakers to accelerate the clean energy transition. It is becoming an imperative for both security of supply and climate action.

In the short term, the current energy crisis is slowing down the energy transition as renewables replace costlier gas instead of dirtier coal; in the long term, the instability in the gas markets may hasten Europe's efforts to reduce its reliance on Russian supplies. With its vast potential for renewable energy, Ukraine could be a beneficiary of that.