Coal Mines Transformed Society. Now, Their Flooded Remains Could Heat the Homes of the Future

14 Feb 2022  by cnbc.com
The ramifications of the Industrial Revolution, which had its roots in 18th-century Britain, were huge.

Britain’s abundance of coal — as well as the ease with which it could be accessed — was a crucial ingredient in this historical turning point, powering the steam engines which helped drive society’s transformation.

But things have changed. The number of operational coal mines there has plunged, and last June, authorities announced Britain would stop using coal to generate electricity from October 2024, a year earlier than the original target of 2025.

Even though most mines in the U.K. have closed, their centuries-old story isn’t necessarily over. In Scotland, work is underway to look at how the water that has flooded old, disused mines can be used to provide decarbonized heating to buildings.

Conducting this research is a facility known as the Glasgow Geoenergy Observatory, which is run by the British Geological Survey. A dozen boreholes have been drilled, with the majority in Rutherglen, a town southeast of Glasgow.

According to those behind the project, both Glasgow and Rutherglen were home to some of the busiest coal mines in Scotland. After their closure, natural floods filled them with water of about 12 degrees Celsius. 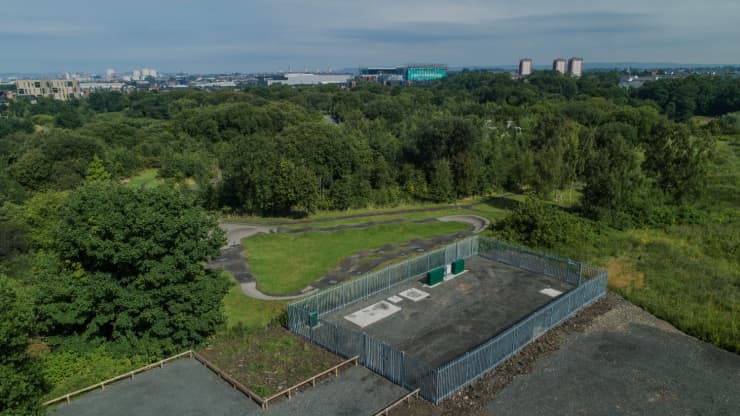 This image shows one of the Glasgow Observatory’s sites in Scotland. A total of 12 boreholes have been drilled as part of the project.
Mike Stephenson, who was until recently executive chief scientist for decarbonization at the British Geological Survey, told CNBC that the project was about “doing research on the heat in coal mines and also, to some extent, whether you can store heat in old coal mines.”

Stephenson said that at the site where the work is taking place, the team was “experimenting with … how fast water flows amongst these mines, how warm the water is, how … fast, if you take warm water out, does the water replenish — so how fast does the warmth come back.”

“It is a research site, not a demonstration,” he said. Research was being undertaken “to try and understand what are the limits to the amount of heat, how much heat there is.”

“All those things will be a set of scientific findings and equations and models,” he added. He said this would provide valuable information to both companies and local authorities interested in the idea.

“It will help them decide where to do it, how close you drill the holes together, how deep you drill them, how you design them to make it as efficient as possible.”

The project has made progress over the last 12 months or so. In the summer of 2021, it was announced that pumping tests had been completed and samples collected from 10 of the site’s boreholes.

“The latest data show that the boreholes of the Glasgow Observatory are well-connected to the flooded mine workings,” Alan MacDonald, a hydrogeologist with the British Geological Survey, said at the time.

Mine water between 50 and 90 meters under Glasgow measures between 11 and 13 degrees Celsius, he added. For comparison, the average temperature of Scottish groundwater is 10 degrees, MacDonald said.

According to Britain’s Coal Authority, 25% of the U.K.’s residential properties sit on coalfields. As a source of heating, the potential of underground, flooded mines such as the ones being researched in Glasgow appears to be considerable.

Citing its own calculations, the Coal Authority says the “constantly replenishing water within these mines could potentially be a large enough resource to provide all of the heating requirements for the coalfield areas.” It could also have applications in sectors such as manufacturing and horticulture.

“The water in these mines is a low carbon, sustainable heat source, which under the right conditions can compete with public supply gas prices and deliver carbon savings up to 75% compared to gas heating,” it notes.

A host of governments are attempting to move away from coal, but it still plays a crucial role in many nations. According to the International Energy Agency, coal supplies around a third of worldwide electricity generation.

While it was crucial to the planet’s industrialization and remains an important source of electricity, coal has a substantial effect on the environment.

The U.S. Energy Information Administration lists a range of emissions from coal combustion. These include carbon dioxide, sulfur dioxide, particulates and nitrogen oxides.

Elsewhere, Greenpeace has described coal as “the dirtiest, most polluting way of producing energy.”

More from CNBC Climate:
Read more about how businesses and consumers are fighting and adapting to climate change:

How the fossil fuel industry is pushing plastics on the world

What really happens to your Amazon returns?

Electric vehicle fires are rare, but hard to fight — here’s why

In the northeast of England, South Tyneside Council has been working on a project aiming to repurpose part of the area’s mining heritage.

According to the council, the £7.7 million ($10.4 million) Hebburn Minewater Project will “draw geothermal energy from abandoned flooded mines in the former Hebburn Colliery.”

The initiative aims to supply heat to several buildings that the council owns by using mine water from the old colliery, which opened in the late 18th century and shut down in 1932.

The project is centered on the drilling of two boreholes. A water source heat pump will extract the mine water’s heat, after which it will be compressed to a far greater temperature. After being funneled to an energy center, a new network of pipes will be used for distribution.

The council is working on the project, which is slated for completion in June 2023, alongside Durham University and the Coal Authority. Last October, it was announced that testing had shown the mine water’s temperature was warmer than initially thought.

New lease of life
Attempts to use the warm waters of flooded mines are not unique to the U.K. In 2008, a facility described by the European Commission as the first mine water power station in the world opened in the Netherlands. A similar project based on using mine water to heat buildings in Asturias, northern Spain, has also been developed.

Back in South Tyneside councilor Ernest Gibson, whose brief covers climate change, spoke to CNBC about the industry’s deep-rooted relationship with the area and his hopes for the future.

“The economics of the area declined [as] soon as the coal mines closed,” Gibson, a former miner, said.

He explained how the shutting down of a colliery affected not only the mining industry but also others like the steel and transport industries, as well as smaller operations like local shops and the “ragman,” a term for a person who would buy, collect and sell old items.

Gibson went on to tell CNBC that he’s “proud” of the fact old coal mines are being used again.

“The collieries closed but ... they were revived in a different format,” he said, later striking a more philosophical tone. “It’s like life — everything changes, nothing stands still. And I think it’s for the best.”