Lithium-ion batteries are relatively safe, long-lasting, fast charging and better for the environment than non-rechargeable batteries–right? Not quite. The rocking-chair mechanism that allows for commercial power storage generally uses rare earth elements, such as nickel and cobalt.

Researchers have long been on the hunt for alternative batteries that boast all the benefits of lithium-ion versions but include ecological and economic advantages.

Now, a team from the Qingdao Institute of Bioenergy and Bioprocess Technology (QIBEBT), Chinese Academy of Sciences (CAS), is closing in on an improved approach. They provided solution to what they call a "notorious issue" that causes the system to malfunction when the battery recharges and discharges, called cycling.

Their study was published in Advanced Materials on Dec. 24. 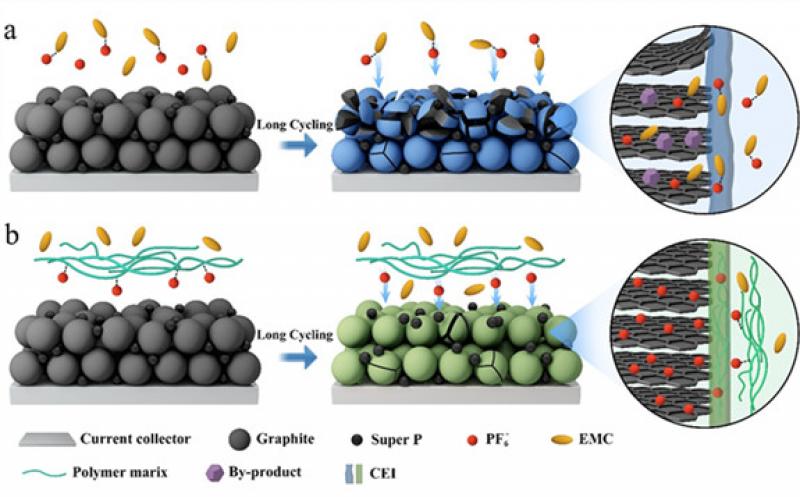 In DIBs, positively and negatively charged ions simultaneously move from the electrolyte–the liquid or film that disperses the ions of a dissolved material and electrically conducts them across a space – to the opposite electrode. The "notorious issue", according to JIANG, is the solvent used in the electrolyte can insert into the graphite layers of the electrodes due to anion-solvent interactions.

"Eventually, this solvent co-intercalation results in graphite exfoliation and pulverization at high potential, especially in the widely used linear carbonate electrolytes," JIANG said. She also noted that high-voltage cycling can also lead to the oxidation of thermodynamically unstable electrolytes. Previous strategies focusing on enhancing the stability of electrolytes have not effectively addressed the critical issue of solvent co-intercalation.

To prevent co-intercalation and electrolyte corrosion, the researchers needed to decouple the negatively charged anions from the solvent. A viable approach is to regulate the anion solvation structure by introducing another component that possesses stronger interaction with anions than carbonate solvents into the electrolyte.

The researchers focused on hexafluorophosphate, an anionic component in lithium–ion batteries. They employed an important monomer containing quaternary ammonium motifs–which are positively charged–to develop a polymer electrolyte membrane that can selectively filter anions. It resulted in superb cycling stability with a 99% coulombic efficiency at high voltage.

"This strategy significantly inhibits solvent co-intercalation, as well as enhances the oxidation resistance of the electrolyte, ensuring the structural integrity of the graphite," said paper author CUI Guanglei, professor at QIBEBT, CAS. "We believe facilitating the anion desolvation is crucial to ameliorate long cycling performance in DIBs."