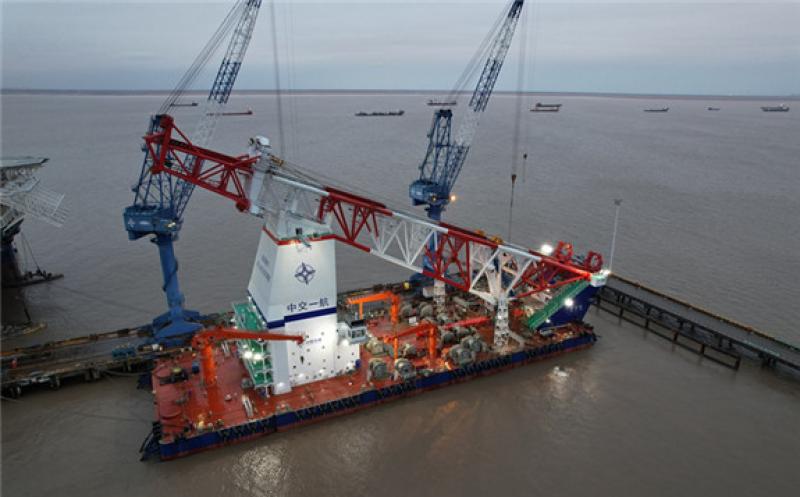 The vessel can boost the efficiency of offshore construction projects such as cross-sea bridges, deep-water wharves and offshore wind farms under harsh sea conditions.

The floating pile driver with the world's highest pile frame, largest pile-lifting capacity, longest pile-driving length and strongest wind and wave resistance, is equipped with intelligent and digital technologies, including the Beidou system.

Chen Xiangmiao, an assistant research fellow at the National Institute for South China Sea Studies, told the Global Times on Sunday that the barge can enhance China's capabilities in offshore operations and serve as a capacity reserve for the development of the South China Sea.

"However, there is still a long way to go in the application of it in the South China Sea, where the depth of water can be 1,000 meters," Chen said, noting that pile driving is the first step for construction work in deep sea areas.

The Yihang Jinzhuang, at 14,644 gross tons has a pile frame of 142 meters, roughly equal to the height of a 50-story building. With its maximum working pile length of 118 meters plus the depth of water, it can work in much deeper open seas.

Gao Xiaodong, leader of the on-site supervision group for the construction of the barge, said that pile driving is the first step in building a structure at sea.

Zhang Ning, an engineer at the construction company, said when the height of a pile frame exceeds 100 meters, it is very difficult to ensure the strength and stability of the structure. The company managed to make it as strong as possible and as light as possible by optimizing the structure and choosing the appropriate steels.

By driving piles of 700 tons in weight and six meters in diameter, the piling ship can reduce the number of piles driven and raise the efficiency of construction. With its wind resistance of fresh gales and wave resistance of 1.8 meters, it can operate in the bad sea conditions.

The pile-driving barge is also equipped with China's domestically developed Beidou system, which will be used in navigation during voyages, accurate positioning during operations, and sending messages where there is no 4G signal.

According to Kang Yuxing, captain of the ship, the linkage between the Beidou system and the electrical auxiliary propulsion system also achieves a function similar to autonomous driving in a car.

Within a certain range, the ship can adjust its position automatically by setting coordinates, which improves efficiency and saves fuels.