The US is poised to be the largest exporter of liquefied natural gas globally this year as China, the world's second-biggest economy, becomes the top importing market for LNG, according to IHS Markit.

The US, which was the third-largest LNG exporter behind Australia and Qatar in 2021, is poised to claim the top spot in 2022, according to IHS.

The US was the largest source of LNG supply growth in 2021, adding 25 million metric tonnes (MMt) amid continued buildup of liquefaction capacity as well as the ramping up of output from plants turned down the previous year, according to IHS. Average utilisation for US plants climbed to 98 per cent in the third quarter of 2021 from 43 per cent in the same period a year earlier.

LNG is natural gas that turns into a colourless and non-toxic liquid when cooled to about -162°C (-260°F). The cooling process shrinks the volume of the gas, making it easy to ship and store. It can be used for cooking, heating homes and generating electricity manufacturing products like fertilisers, paints, medicines and fuelling commercial vehicles.

Demand for LNG globally is currently projected to grow by up to 5 per cent annually over the next 20 years, as it can contribute to better air quality and lower green house gas emissions in the power sector. This makes LNG ideal for the transition to a low-carbon energy future, supporting a mix of fuels to help countries balance energy demand with their clean energy goals.

Global LNG demand grew by 20 million tonnes per year in 2021 with Asia accounting for virtually all of the growth, according to Wood Mackenzie. 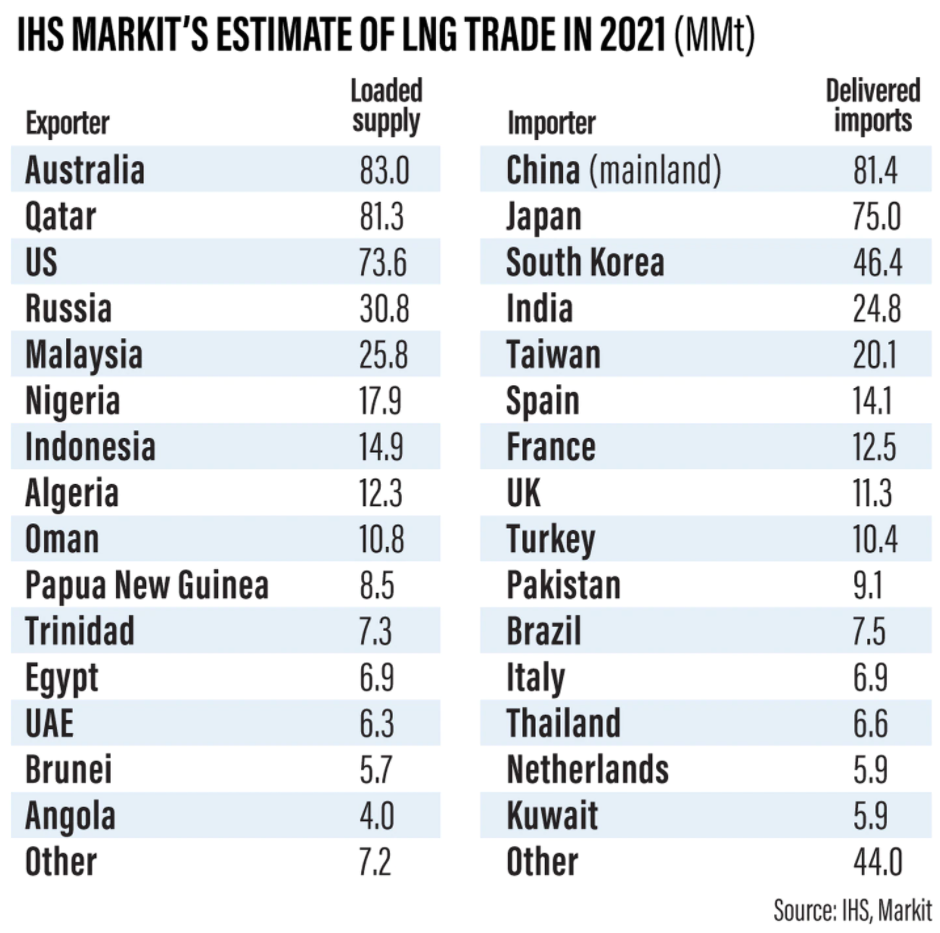 Demand in China grew more than 18 per cent with imports climbing above 81 MMt in 2021, making it the world's top importer, overtaking Japan. Japan LNG imports were flat year-over-year at 75 MMt, marking the first time since the early 1970s that the country has not been the world’s largest LNG importer, according to IHS.

South Korea was in third place at 46.4 MMt. Brazil registered the largest increase in a country's annual demand, which more than tripled to reach 7.5 MMt amid a drought and weak hydropower generation that forced the market to rely more heavily on LNG imports.

“A new map of LNG is taking shape as 2021 became the year of rapid recovery, making the oversupply and price lows of 2020 seem like a distant memory,” said Michael Stoppard, chief strategist of global gas at IHS Markit. “It is a tale of two markets with China fuelling the demand surge as the world’s top importer and the US, poised to become the world’s leading exporter, providing the supply push.”

China, which is dubbed as the world's factory, has recovered strongly from the Covid-19 pandemic. Though the pace of growth weakened in the third quarter of last year to 4.9 per cent, manufacturers have resumed production, easing the disruption to global supply chains. China is set to surpass the US to become the world's biggest economy by 2030, according to the London-based Centre for Economics and Business Research.

Long-term contract LNG signings rebounded to an all-time high after a pause in 2020, according to IHS. Over 65 million metric tonnes per annum (MMtpa) of firm, long-term contracts were signed in 2021, surpassing the previous record of 61 MMtpa in 2013. China was the largest specified end-market, with Chinese buyers signing around 25 MMtpa of firm long-term deals.

Spot LNG prices in Asia soared to nearly $30 per million British thermal units (MMBtu) briefly last January amid cold weather and transportation challenges. Prices settled at normal ranges in the first half of the year before climbing again in Asia and Europe in the second half of the year. Prices ended December 2021 at $40/MMBtu, more than double the previous peaks achieved in the several years following Japan’s 2011 nuclear crisis, according to IHS.

Total loaded LNG supply in 2021 increased 5.5 per cent to 396.3 MMt from the previous year. The US provided the largest supply growth with 25.3 MMt of additional LNG (52 per cent increase), reaching 73.6 MMt, according to IHS.