03 Dec 2021  by World Nuclear News
Westinghouse Electric Company and EDF have signed a Memorandum of Understanding (MoU) to produce cobalt-60 in selected pressurised water reactors (PWRs) owned and operated by EDF in France. The agreement is the first step towards production in Europe of the radioisotope for medical uses, the companies said. 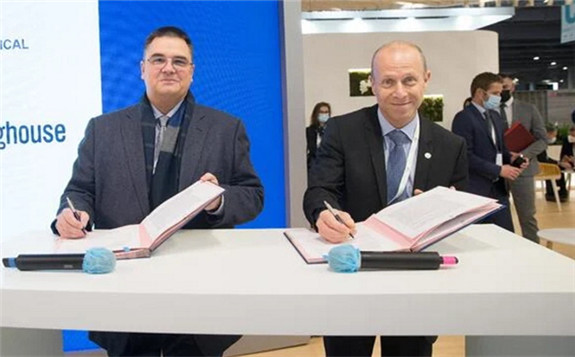 The MoU was signed at the World Nuclear Exhibition in Paris by EDF Group Senior Executive Vice-President, Nuclear and Thermal Cédric Lewandowski and Westinghouse President and CEO Patrick Fragman.

Co-60 is used to sterilise medical devices and is also used in cancer treatment. Most of the world's supply of the isotope is produced in Candu reactors, mostly in Canada but also in Argentina, China and South Korea. It is also produced in RBMK reactors and the BN-800 fast neutron reactor in Russia.

"Production of Co-60 in EDF nuclear power plants shows that, in addition to its role of production of carbon-free electricity, nuclear energy can also help on global health," Lewandowski said.

Co-60 is produced by exposing the stable Co-59 isotope to neutrons. Under the MoU, Westinghouse would manufacture Cobalt-59 capsule fuel assembly inserts - or COBAs - for EDF to irradiate in its PWRs to generate activated Co-60. Westinghouse would be responsible for commercialising the Co-60 produced.

"We are delighted to partner with EDF in this key agreement that will expand and strengthen the global Co-60 supply chain," Fragman said.

The companies said they will begin a feasibility assessment and are aiming for an anticipated Co-59 load date in the late 2020s with the first Co-60 harvest in the early 2030s.