Polish chemical company Ciech has signed a Letter of Intent to cooperate with Synthos Green Energy (ESG) to co-operate in the use of small modular reactor (SMR) and micro modular reactor (MMR) technologies.

As part of the cooperation, both entities will define, the possibility of building small or micro nuclear reactors on the premises of Ciech's production plants and they will analyse possible models of energy supply under mutual agreements. The Ciech Group announced the possibility of using nuclear power during the publication of the ESG strategy in May 2021. It assumes a departure from the use of coal in 2033, and the achievement of climate neutrality in 2040.

The signed letter of intent will enable the Ciech Group to thoroughly analyse the use of SMRs and MMRs in plants producing soda ash. Currently, combined heat and power plants supplying steam - an essential raw material in the technological process - use coal as a fuel. The Ciech Group is one of the largest recipients of coal after the commercial power industry in Poland, but in accordance with the adopted strategy, it is to gradually move away from this raw material in favour of obtaining energy from natural gas, thermal waste processing or just nuclear energy.

SGE is a strategic and exclusive partner of GE Hitachi Nuclear Energy Americas in the use of SMR technology (up to 300MW), and with Ultra Safe Nuclear Corporation - in the field of MMRs (up to 15MW). The company is also developing cooperation in the field of hydrogen production with the use of micro reactors.

“Clean, emission-free nuclear energy may become an important element of the strategy of achieving ambitious climate goals by our group, as well as an important factor increasing the competitiveness of Ciech in the long term,” said Dawid Jakubowicz, President of the Ciech Management Board. “The cooperation of Ciech, a representative of the energy-intensive business of great importance for the Polish economy, with Synthos Green Energy may result not only in accelerating the decarbonisation process of the domestic industry, but also in strengthening its position on the global market.”

Rafal Kasprów, President of the SGE Management Board noted: “The first generation IV reactor is to be launched in Canada in 2025, the next units will be built in the USA. If the licensing process in Poland runs correctly, there is nothing to prevent the fourth generation reactors from being commissioned at Ciech plants before the end of the decade.” Synthos Green Energy is active in the decarbonisation of the Polish industry and energy focusing on the construction of offshore wind farms and nuclear energy.

The Ciech Group is implementing an ambitious decarbonisation plan and, by 2026, it intends to reduce carbon dioxide emissions by some 33% compared with 2019, and in 2033 to stop using coal in energy production processes. 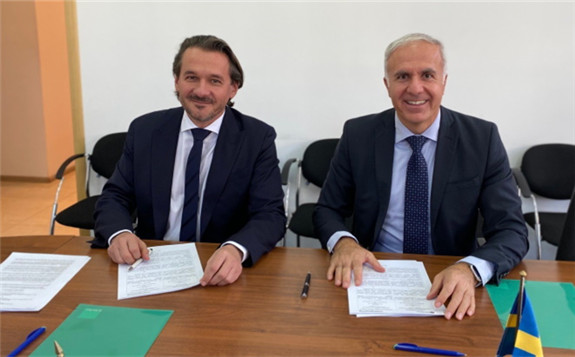