Officials with battery maker Form Energy have announced the development of the Iron-Air 100-hour storage battery—a battery meant to store electricity created from renewable sources such as solar and wind. As part of their announcement, they note that their new battery is based on iron, not lithium, and thus is much less expensive to produce. 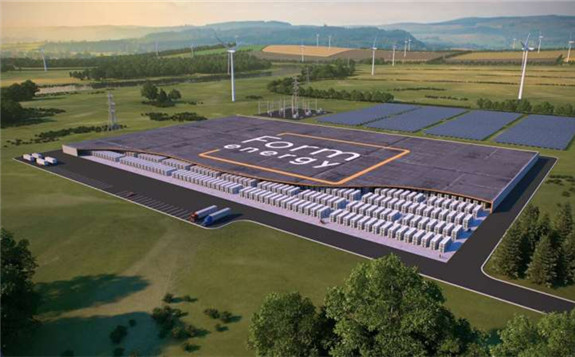 The team at Form Energy describe their new battery as a multi-day energy storage system—one that can feed electricity to the grid for approximately 100 hours at a cost that is significantly lower than lithium-ion batteries.

The basic idea behind the iron-air battery is that it takes in oxygen and then uses it to convert iron inside the battery to rust, later converting it back to iron again. Converting back and forth between iron and rust allows the energy that is stored in the battery to be stored longer than conventional batteries.

The batteries are much too big and heavy for use in small applications (or cars)—each battery is approximately the size of a washing machine. Instead, they are meant to be hooked together in massive grids capable of storing enormous amounts of electricity for days at a time. Cells are stacked inside of a water-based, non-flammable electrolyte, which the company claims is similar to that used in standard AA batteries—the cells are made of iron and air electrodes.

When grouped together, thousands of the batteries could be used to store huge amounts of power—they suggest that a grid covering approximately one acre using their low-density batteries could provide power for a one-megawatt system. The high-density version, would be triple that.

On the website, officials with Form Energy suggest that their batteries provide a solution to a growing problem—managing the variability of renewable energy sources. They suggest that other current battery technologies are not cost-effective, noting that they typically cost up to $80 per kw/hour of storage. Their new battery, they claim, costs under $6 per kw/hour in its most basic form, and approximately $20 per kw/hour when outfitted as part of a total system—a price point, they further claim, that many in the field describe as necessary for renewable systems to replace those based on fossil fuels. They also note that some big names have invested in their company, such as Bill Gates and Jeff Bezos, and that they have already forged deals with some utilities, such as Great River Energy in Minnesota.