Spanish utility Iberdrola has signed a €400 million framework deal with the Navantia-Windar consortium for the supply of 130 offshore wind turbine monopiles for advanced developments Iberdrola declines to identify. 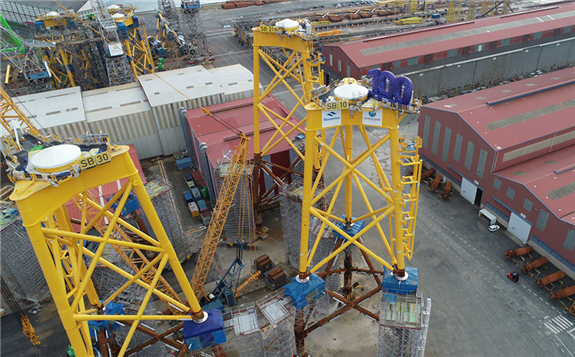 While specific contracts remain to be sealed, the deal has spurred Navantia and Windar to approve construction of a joint monopile facility in the dockyards of Fene, in the Galicia region.

The new facility will be built within an existing warehouse structure and will incorporate steel-curving capabilities for steel tubes with a diameter of up to 16 metres.

Shipbuilder Navantia is based in Galicia, while turbine tower and offshore wind foundation manufacturer Windar is headquartered in the neighbouring province of Asturias.

The framework deal follows Iberdrola’s €350 million contract with the Navantia-Windar consortium in June 2020 to provide 62 jacket structures and 248 monopiles for its 496MW Saint Brieuc offshore wind project in France, off the coast of Brittany, which the partners are currently manufacturing.

The consortium has a seven-year relationship supplying Iberdrola’s offshore business, consolidated by a 2016 order to provide 70 jackets and 280 piles for the 350MW Wikinger offshore wind plant in the Baltic Sea.

That order also prompted Navantia-Windar to build a jacket facility at Fene.

Iberdrola operates 1.3GW of offshore wind power, all in Europe, though it is currently developing the 800MW Vineyard Wind 1 project off the Massachusetts coastline, USA.

The company claims a 20GW global offshore wind portfolio, with 2.6GW currently under construction towards an expected cumulative offshore total of 12GW to 2030, including 3.9GW in Japan.