EU Carbon Price and Its Impact on Natural Gas Demand

The European Union Emissions Trading System (EU ETS) is the foundation on which the EU has set out to achieve its climate change goals. The framework was initiated in 2005 and is the world’s oldest international emissions trading system. It covers about 40% of EU’s greenhouse gas (GHG) emissions from the power, manufacturing, and aviation sectors and functions in all 27 EU member states plus Iceland, Liechtenstein, and Norway.

The Market Stability Reserve (MSR) was introduced in January 2019 as a long-term solution to address a market imbalance in which a surplus of allowances was accumulated in the system since 2009, when emissions were much lower than expected due to the global financial crisis. Instead of auctioning these excess allowances the MSR absorbed approximately 773 million allowances in 2019-2020. The MSR is expected to remove surplus allowances at a rate of 24% per year until 2023, however this is subject to a review in 2021.

This paper explores the trends and drivers of EU carbon prices and how they impact natural gas demand, particularly in the power sector. While the future of carbon pricing is uncertain, a recent uptick in the market with record high prices makes it imperative to dig deeper into the potential impact on natural gas exporters.

The EU ETS operates on the basis of a ‘cap and trade’ principle in which a cap is set for the total GHG emissions that can be emitted within the system. Participants are allowed to trade their allowances based on their needs but they must have sufficient allowances to cover their total emissions for each year, or else they will be subject to heavy fines. In this way, the ETS

provides financial incentives to cut emissions and also promotes investment in low-carbon technologies. Thus, as the cap is reduced over time, emissions are also lowered.

The concept of carbon pricing as a strategy to curb emissions has been around for decades, but it has recently picked up momentum in light of EU’s aggressive climate change goals to raise the 2030 emissions reduction target from 40% to 55% (compared to 1990 levels) in its drive towards carbon neutrality by 2050.

EU carbon prices averaged €16/tCO2 in 2018 increasing by 57% to €25/tCO2 in 2019. During the period March-May 2020, carbon prices dipped to around €20/tCO2 as demand for carbon allowances dropped sharply due to the COVID-19 driven decline in electricity demand. However, there was some recovery in prices in the second half of 2020 and since then carbon prices have been on an upward trend. EU carbon prices reached record daily highs above €50/tCO2 in early May 2021, soaring above €56/tCO2 on May 14 (see Figure 1 below). In addition to climate change policies, colder than usual temperatures during the 2020/21 winter season also increased demand for electricity and heating, which in turn increased the demand for allowances and thus drove prices up. 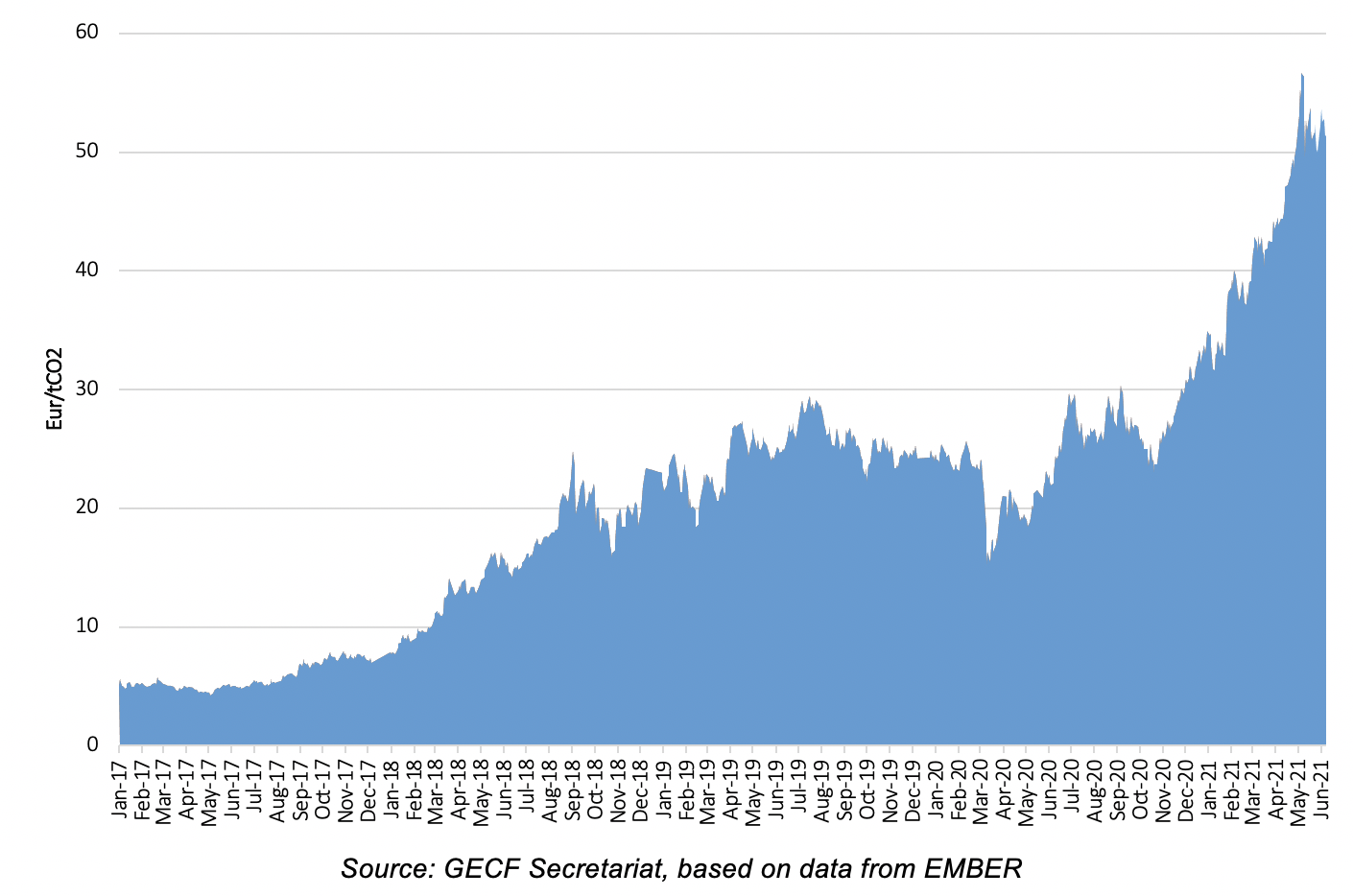 Inter-fuel competition in the European power sector is ultimately impacted by the coal-to-gas switching price, which indicates the threshold at which gas-fired generation is more competitive than coal-fired generation and takes into account operating costs, efficiencies fuel costs, and carbon prices. As coal power plants emit around double the amount of carbon emissions compared to that of gas power plants, coal plants will naturally incur a higher carbon cost. Once the gas price is lower than this threshold, gas is considered the more economical fuel for power generation and vice versa.

The magnitude of the spread between the coal-to-gas switching price and TTF spot gas prices also dictates the extent of the inter-fuel switching. During the period May-July 2020, when TTF prices were down to extreme lows, the spread widened drastically, to around €8-11/MWh. Figure 3 below shows the trend in EU demand in the power sector for gas and coal against EU carbon prices. During the period May-July 2020, there was a sharp spike in gas demand by 52% which was likely driven by the wide spread between the coal-to-gas switching price and TTF, high carbon prices(which increased by 38% for the same period), as well as the recovery of power sector demand due to the easing of lockdown measures. Coal demand also increased slightly by 24% during this period.

Fast-forward to January 2021, with an average carbon price of €33/tCO2 and a spread of almost zero between the coal-to-gas switching price and TTF. Extremely cold weather caused a surge in heating demand resulting in a greater call for power generation. Increased demand pushed both gas and carbon prices upward however, there may not have been much fuel switching as both fuels were required to satisfy the high demand. The share of gas increased from 20% to 31% m-o-m while the share of coal increased from 15% to 23% m-o-m. 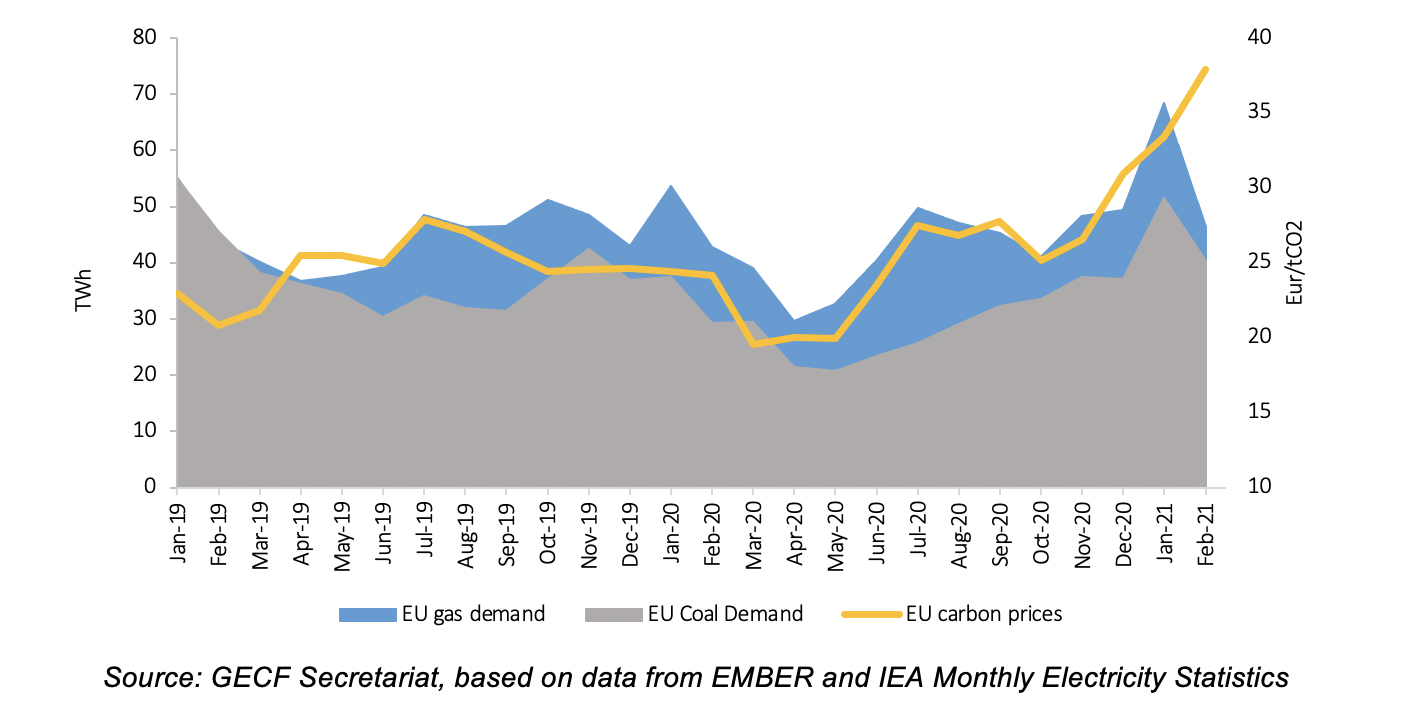 What can we expect?

At the moment, the market awaits additional policy announcements from the European Commission (EC) for its ‘Fit for 55’ package on 14 July 2021, which is expected to widen the scope of emissions to include those from the maritime, transport and building sectors. These reforms are expected to tighten the carbon market. The third trading phase was characterised by intense coal-to-gas switching and higher renewable capacity. In this fourth trading phase, one can expect to see strong carbon pricing, however, there is still great uncertainty surrounding the level of carbon prices which will be highly dependent on any new EU ETS policies as well as the ramp up of economic activity and demand in the power sector.

Furthermore, the EC is also expected to propose a new regulation to establish a Carbon Border Adjustment Mechanism (CBAM), which aims to regulate GHG emissions by imposing

a carbon emissions cost on certain imported goods in order to prevent the risk of carbon leakage.

The CBAM is expected to apply to some goods in the following segments: cement, electricity, fertilisers, iron and steel, and aluminium. This regulation may start from 2023 with full implementation from 2026. Importers will be required to provide data on these outlined imported goods and buy digital certificates (each one representing one tonne of CO2 emissions embedded in the good) to cover the calculated CO2 emissions of the good. Some countries, including less developed countries and those with similar carbon pricing mechanisms to Europe, may be exempted from the levy.

Based on these expectations, which have not yet been officially established, there are several concerns on the impact of such a mechanism. Alignment with the World Trade Organization (WTO) systems still seems to be uncertain, as well as the fate of revenues generated. The inclusion of the buildings and transport sectors may hit low-income households hard as it would mean increasing fuel bills. The EC has stated that once such policies are rolled out, there will be a climate action social fund to mitigate the impact on vulnerable citizens. However, this can have far-reaching social consequences at a national level.

In relation to the future of carbon markets globally, the China ETS is poised to surpass Europe to become the largest carbon market in the world, with carbon allowances of nearly four billion tons. China launched its national carbon emissions trading scheme in January 2021. It is one of the key instruments needed to meet its enhanced climate change goals to peak carbon dioxide emissions by 2030 and achieve carbon neutrality by 2060.

The China ETS will start trading later in June 2021 and its implementation will begin in the power sector, with 2,225 power plants whose historical annual emissions exceed 26,000 tons of CO2 equivalent. The China ETS will differ from the EU ETS in that there is no emissions cap, but rather a rate-based allocation mechanism, which will vary according to plants production levels. In the first instance, entities will receive free allowances in proportion to their production levels. If they are able to reduce emissions beyond the applicable benchmark, then they can have surplus allowances. There are four distinct benchmarks namely: conventional coal plants below 300MW, conventional coal plants above 300MW, unconventional coal, and natural gas. Based on this design, China’s ETS would encourage coal power plants to improve efficiency and implement carbon capture, utilisation and storage (CCUS) technologies. However, the impact on coal-to-gas switching would be limited, as fuel-switching may not necessarily be economically feasible due to the multiple benchmarks.

Globally, there are existing emissions trading schemes and carbon taxes in over 60 countries. Government policies and regulations in this area are expected to continue to evolve and become more widespread as the world makes strides towards the energy transition. Such policies will incentivise the development of low carbon technologies and support the overall decarbonisation of the gas industry. In this regard, the GECF Member Countries will continue to support research and development of such technologies that will make gas more competitive and cement its role as a destination fuel. The Forum will also continue to facilitate dialogue amongst all industry players to share knowledge and experiences as it moves together towards a low carbon future.