15 Jun 2021  by World Nuclear News
Unit 1 of the Taishan nuclear power plant is operating at full power and there has been no release of radiation at the plant or in the surrounding area, China General Nuclear (CGN) announced yesterday following media reports of a leak at the plant in China's Guangdong province. France's EDF, which holds a 30% stake in the two-unit plant, said it had been informed of an increase in the concentration of certain noble gases in the EPR reactor's primary circuit. 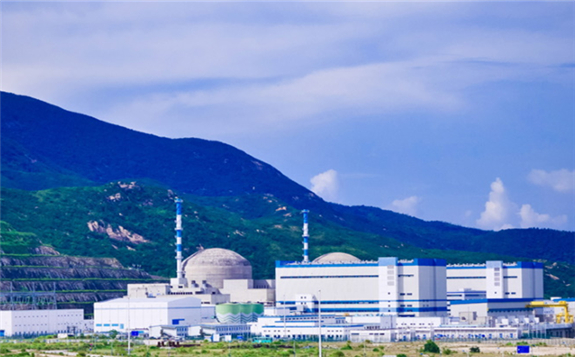 Taishan 1 and 2 are the first two reactors based on the EPR design to begin operating anywhere in the world so far. They form part of an EUR8.0 billion (USD9.7 billion) contract signed by Areva and CGN in November 2007. The Taishan project - 140 kilometres west of Hong Kong - is owned by TNPJVC, a joint venture between CGN (51%), French utility EDF (30%) and the Chinese utility Guangdong Energy Group (19%). Unit 1 of the power plant started construction in 2009, followed by unit 2 in 2010. The 1750-megawatt EPRs entered commercial operation in December 2018 and September 2019, respectively. The EPR design adopted in Taishan was developed by Framatome.

Taishan 1 has entered the second fuel cycle and is currently operating at full power, CGN noted. Taishan 2 has completed its first overhaul and was successfully reconnected to the grid on 10 June. "The safety, quality, and construction period of the overhaul have all completed the set goals," the company added.

"Since it was put into commercial operation, the Taishan nuclear power plant has strictly controlled the operation of the units in accordance with the operating licence documents and technical procedures," CGN said. "All operating indicators of the two units have met the requirements of nuclear safety regulations and power plant technical specifications.

"At present, continuous monitoring of environmental data shows that the environmental indicators of the Taishan nuclear power plant and its surroundings are normal."

EDF said today it has been informed of the increase in the concentration of certain noble gases in the primary circuit of Taishan 1. However, it noted this is "a known phenomenon, studied and provided for in the reactor operating procedures".

The French company said that, as a shareholder of TNPJVC, it has requested the holding of an extraordinary meeting of the TNPJVC board of directors in order for management to "present all the data and the necessary decisions".

Framatome said it is "supporting resolution of a performance issue" with the Taishan plant. "According to the data available, the plant is operating within the safety parameters," it said. "Our team is working with relevant experts to assess the situation and propose solutions to address any potential issue."

There are three further EPR reactors under construction worldwide, including Flamanville 3 in France, Olkiluoto 3 in Finland and Hinkley Point C in the UK.