Oil prices settled lower on Friday and fell around 2% last week as production increases and renewed COVID-19 lockdowns in some countries, offset optimism about a recovery in fuel demand. Brent crude settled down 22 cents, or 0.4%, to $62.95, while WTI ended 28 cents, or 0.5%, lower at $59.32.

Prices have been pressured by the decision of the OPEC+, to increase supplies by 2 million bpd between May and July. Coupled to this, the U.S. dollar fell to a two-week low against a basket of currencies, tracking Treasury yields lower, after data showed a surprising rise in U.S. weekly unemployment claims. A weaker dollar makes oil cheaper for holders of other currencies, which can help boost crude prices.

Talks to bring Iran and the U.S fully back into the 2015 nuclear deal have progressed, delegates said on Friday, but Iranian officials indicated a disagreement with Washington exists over which sanctions it must be lifted. A successful deal would potentially bring an additional 2 million bpd of supply into the market, according to data intelligence firm Kpler. 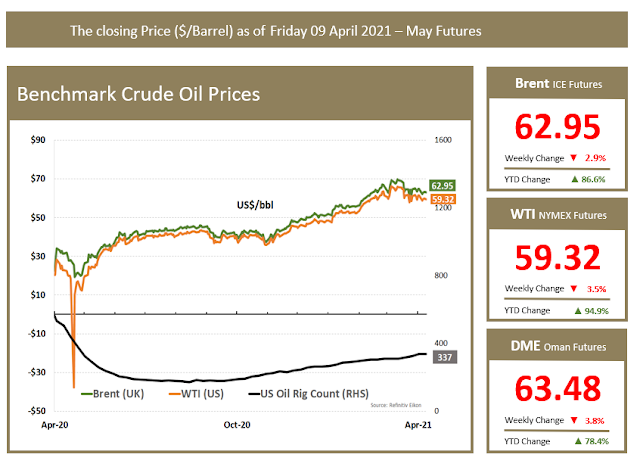 Asian spot prices for LNG rose last week on the back of demand from China as at least two buyers sought cargoes for delivery ahead of winter, trade sources said. The average LNG price for May delivery into Northeast Asia was estimated at about $7.30 per million British thermal units (mmBtu), up 35 cents from the previous week.

Still, Asia supply was ample with several sellers offering cargoes, which capped price gains, said sources. In Asian demand, China's Sinopec bought 30 to 50 LNG cargoes for delivery into China over June this year to February next year at a discount to North Asian prices. Also, Thailand's PTT bought a cargo for mid-May at about $7.20 to $7.35 per mmBtu while India's Gujarat State Petroleum Corp (GSPC) bought a cargo for delivery in May at about $7.10 to $7.20 per mmBtu.

In the U.S., front-month gas futures rose 0.4 cents, or 0.2%, to settle at $2.526 per mmBtu, their highest since April 1. The last time the contract rose for three straight days was in mid-February. Even though the contract has been up for a few days in a row, big losses early in the week left the front month down about 4%, after rising about 3% last week. However, henry hub prices were edged on Friday, on forecasts for cooler weather and higher heating demand in mid-to-late April, the first time in seven weeks prices rose for three straight days.

Traders noted that while temperatures may be lower, they are expected to remain at above-normal levels with LNG exports expected to decline this month during routine plant and pipeline maintenance. 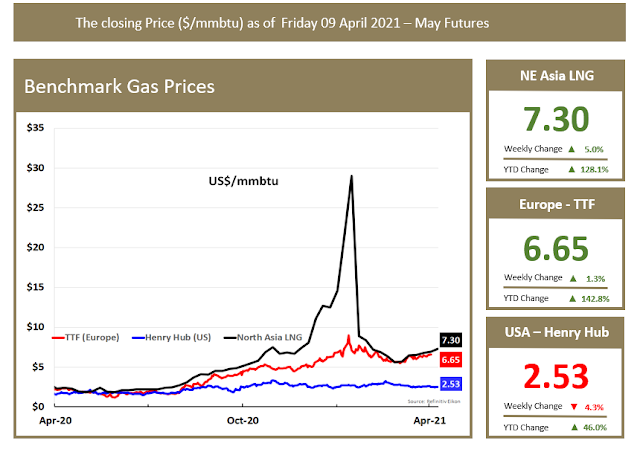