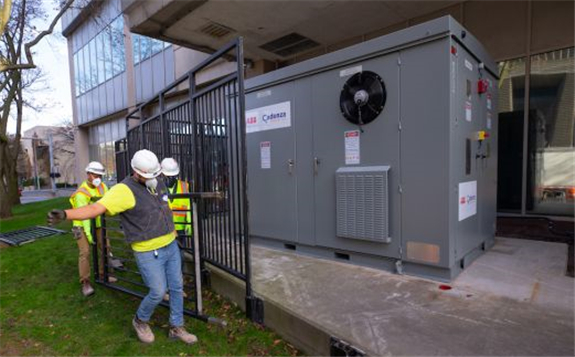 The New York Power Authority (NYPA) has started up a demonstration project aimed at addressing safety concerns tied to the deployment of lithium-ion battery storage in urban areas and office blocks.

A 50kW / 250kWh battery storage system has been installed outside NYPA’s White Plains offices, using ’Supercell’ lithium-ion battery technology developed by Cadenza Innovation. The Supercell architecture is designed to solve the issue of thermal runaway that can cause fires when individual cells suffer failures including short circuits.

New York has some of the most stringent fire safety rules in the world, while the state also has some of the most ambitious policies in place to tackle climate change in the US. This includes a goal of deploying 3,000MW of energy storage by 2030, to both support the growth of renewable energy and create a more efficient and more resilient grid.

NYPA is a state authority, as well as being a utility supplying around 25% of the entire state’s electricity. Alan Ettlinger, NYPA director of research, technology development and innovation, told Energy-Storage.news that when his team saw Cadenza’s technology, they felt that “this was something that can get us to this goal,” of reaching the ambitious energy storage target.

As Ettlinger pointed out, much of the state, not just New York City, but also cities including Syracuse, Albany and Buffalo is an urban area, and there have been concerns over installing the “classical lithium-ion battery” in such areas.

“There's very stringent requirements. The New York City Fire Department [has probably among] the most stringent rules and regulations concerning what can and cannot be installed,” Ettlinger said.

“I’ve worked with the local White Plains [fire] department, that was really almost deferred to the York City Fire Department on many of the reviews, and so we feel that those stringencies, whatever those concerns could have been, are being addressed by what we're doing in our installation in White Plains. So we think we have the answer.”

Ettlinger’s R&D section had been looking for a solution for energy storage that could let NYPA “bypass those safety concerns,” and that having gone through testing, including UL 9540A fire testing, the Cadenza Innovation Supercell meets New York’s stringent criteria for safety.

“The technology prevents thermal runaway, which really means that if there should be an incident or an issue with one of the cells, one of the small cells in the battery, that will not go on to the next cell. That's the inherent safety feature that we think will enable Cadenza and the Power Authority in the future to install this type of technology in urban areas, which I think is probably one of the key things that has been a challenge around the world, really,” Ettlinger said.

Cadenza Innovation CEO Dr Christina Lampe-Onnerud said that the company, active since 2012, wanted to take lithium-ion technology, which is well-recognised and widely used across a range of industries, and rethink storage system design with “safety at the forefront”. Lampe-Onnerud was interviewed for a recent feature article in our quarterly journal PV Tech Power, on the types of innovations and business models that will need to be introduced for the lithium-ion battery to maintain its lead as the main technology of choice for energy storage.

The project has been part-funded by NYPA as well as the New York State Energy Research and Development Authority (NYSERDA) and Cadenza has partnered with power engineering and automation company ABB on the technical side. Lampe-Onnerud said that NYPA observed much of the third-party testing that the product went through, while ABB ran its own tests separately before anything could be considered for installation.

It’s a project, the Cadenza CEO said, “where data rules, where results matter,” while its learnings will also be put into the public domain. NYPA’s Alan Ettlinger said the battery storage system’s primary application will be in peak shaving, reducing the White Plains office’s draw from the grid at peak times and therefore reducing energy costs and carbon intensity of electricity use.

While Lampe-Onnerud believes that the eventual answers to climate crisis issues will require a variety of different technologies, lithium-ion can lean on an existing supply chain and that “there is a wide understanding of what lithium-ion can do and what the potential is of the technology”.

“There are multiple factories in the world that understand how to do this, which also means that all the automation equipment is ready, you can deploy manufacturing in multiple countries, it becomes somewhat generic in how you make components.”

Cadenza took all of that into consideration and the CEO hopes that “by using the knowledge in the industry” already and marrying it to a simplified design, the company is “inching closer to the theoretical value… one step closer to what lithium-ion could be”.

While New York’s energy storage market has begun to take off, NYPA’s Alan Ettlinger said that the large-scale systems built so far have been located upstate, away from the urban areas. Some smaller installations have begun closer to the cities, but when it comes to deploying at offices or apartment blocks the safety concern is there. The White Plains demonstration project has been designed with every possible safety concern directly addressed, Ettlinger said.

“As this is really the first of a kind type of installation we want to make absolutely sure. So we feel confident that, you know, what we're about to install in our White Plains offices is as safe as anything else out there.”